The global fixed wing turbine aircraft market is anticipated to record a CAGR of around 5.8% over the forecast period i.e. 2019-2027. The market is segmented by aircraft type & application. By aircraft type, the market is bifurcated into business jet and military aircrafts out of which, the business jet segment is anticipated to have leading market share in future. The large cabin jets are currently gaining importance in the segment along with the increase in the penetration into the new markets as well upliftment in sales and margins.

The market is further segmented by application into general aviation, scheduled air transport, military aviation out of which, the general aviation segment is expected to provide vast opportunities in the market on account of huge demand from the commercial and industrial sector. People in the rich and ultra-rich category choose to buy these aircrafts, thereby enhancing the standard of living.

The market has witnessed huge technological advancements such as the gas turbine engines have integrated increased compressor pressure ratio, improvement in fan and nacelle performance, increased turbine inlet temperature that has led to the dominance of the global fixed wing turbine market. The increase in the development of new engine technologies with advancements in engine-airframe integration and immense support from the industry and National Aeronautics and Space Administration (NASA) have created huge opportunities for the players and has open the ways for the great revenue generation.

Continuous development in the materials and material processing techniques, progress in the combustion technology, widely improved utilization of computational fluid dynamics (CFD) in the engine design procedure and advancements in the turbo machine technology has contributed towards the growth of the market.

Increase in the Number of Affordable Aircraft

The prices of the aircraft have now become affordable for the targeted customers. The customers are increasingly adopting the product for their luxury and business purposes. The developing countries are hugely investing in the product. This factor is anticipated to propel the growth of the market during the forecast period. 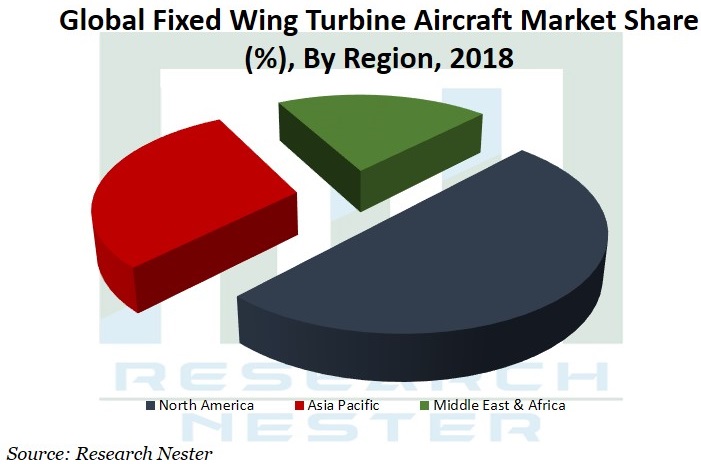 The high initial investment pertaining to the fixed wing aircrafts makes it less affordable for the low income economies. The companies in the market are targeting the untapped economies especially the customers in the developed and developing countries. The market may not gain revenue in such economies because of the high initial investments in the product. This factor is expected to restrain the growth of the market during the forecast period.

North America region is anticipated to hold leading market share in the fixed wing turbine aircraft business on account of improvements in the infrastructure and loosening of the strict regulations. U.S. accounted for about 64% of General Aviation Aircraft sales around the world. Asia Pacific region is expected to witness significant growth in the market owing to substantial growth in the developing economies such as India and China and increasing number of millionaires in the region. Increase in the defense expenditure in Asia Pacific and Middle East & Africa region, the military turbine aircraft market is projected to grow rapidly in next few years. Especially, India and China are increasing their purchases of the fixed wing aircrafts in order to modernize their fleet. Middle East is expected to offer great opportunities for the business jet and military jet segments. The manufacturers would generate huge revenues by investing in these markets.

The global fixed wing turbine aircraft market is further classified on the basis of region as follows: