Introduction to Fetal and Neonatal Equipment

Neonate or newborn refers to an infant in their first 28 days after birth and is applicable to premature, full-term, and postmature infants. Before birth, the term fetus is used. Increased prevalence of congenital anomalies and infant deaths has encouraged the shift towards fetal and neonatal care equipment. These equipment assist in diagnosis, monitoring and treatment of fetus and newborn infants. According to a survey conducted by World Health Organization (WHO), an estimated 3.1 million newborn deaths, 2.7 million stillbirths and 3,40,000 maternal deaths occur in almost all low-income countries worldwide each year. Neonates represent extremely susceptible population requiring intensive care since they are at a higher risk of dying during their first month. According to UNICEF, an average global rate of 18 deaths per 1,000 live births were witnessed in 2017 and the probability of death decreases as an infant reaches an age of 1 and decreases further in subsequent years.   Advancements in medical technology have enhanced the survival rate and quality of life for newborns. Since the immune system of neonates is relatively immature at the time of birth and has to evolve during the course of life through exposure to foreign pathogens, it makes them more prone to nosocomial infections. Additionally, preterm and newborn infants have less developed cutaneous barrier which makes them more inclined towards Hospital-acquired infections (HAI). This leads to the adoption of fetal and neonatal care equipment to avoid neonatal morbidity and mortality along with potentially decreasing the risk of HAIs in neonatal intensive care unit (NICU).

The market is observing a robust growth on account of increased cases of preterm and low-weight birth due to lifestyle changes, such as smoking, drinking, obesity and others. Increased awareness and various government and non-government initiatives regarding fetal and neonatal care are also anticipated to positively impact the growth of the market. Additionally, rapid innovations in healthcare infrastructure leading to an early detection and treatment of disease even before the beginning of symptoms are also projected to propel the growth of the market. 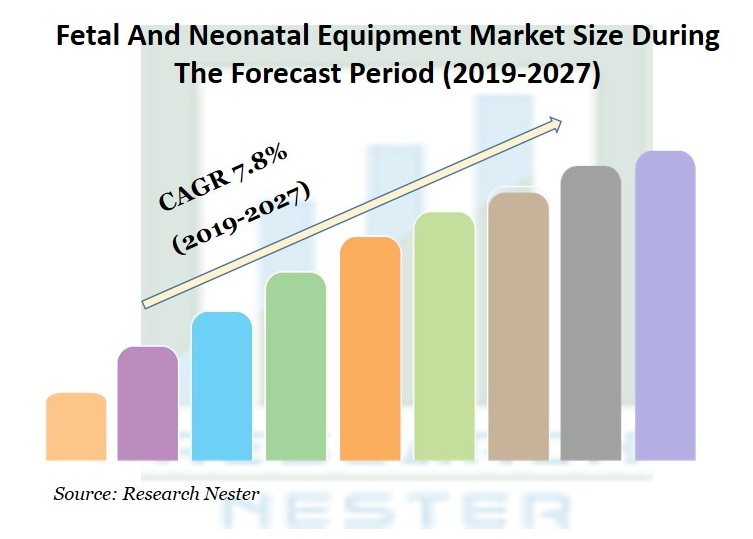 Increased prevalence of birth defects and pregnancy complications leading to preterm and low-weight births owing to sedentary lifestyle and diseases such as, high blood pressure and diabetes are some of the concerning factors that are expected to propel the growth of the market over the forecast period.

High birth rate in developing countries such as India and China along with increased awareness owing to government initiatives towards fetal and neonatal care is expected to foster the growth of the market.

Additionally, improved healthcare infrastructure for early detection and prevention of congenital disorders is also anticipated to drive the growth of the market in upcoming years.

Development in technology leading to high cost of medical devices used for fetal and neonatal care is projected to dampen the growth of the market.

Additionally, limited accessibility of fetal and neonatal care equipment in developing countries is also estimated to impede the growth of the market.

The market in North America region is expected to show notable growth throughout the forecast period on the back of rising initiatives for maternal and childcare combined with adoption of advanced healthcare infrastructure in this region. The market in Asia Pacific is also anticipated to show a significant growth over the forecast period. This can be attributed to high birth rate and increased number of preterm births in this region.

The global fetal and neonatal equipment market is further classified on the basis of region as follows: