Edible insects are used for human consumption and there is a wide variety of insect species that fall into these criteria. With an increasing demand for animal-based food and to provide a large population, insects are being used as a source of food.

According to the United Nations Food and Agriculture Organization (FAO), beetles, ants, bees, grasshoppers, and crickets are few of the most commonly relished of the over 1,400 insect species eaten by humans globally.

The book, Edible Insects: Future prospects for food and feed security by FAO, stresses on the nutritional value derived from consuming insects and that it can address the global problem of food security.

Edible insects are roasted, dried, and powdered to obtain high protein and low-calorie flour, that is used for preparing low-calorie energy bars and snacks. Also, they are compatible with several natural ingredients and flavors.

The edible insect market is expected to observe more than 40% CAGR during the forecast period, i.e., 2020-2028. The market is segmented by insect type, product type, application, and region. Amongst the product type, the powder segment is estimated to hold the leading market share. The huge application, easy availability of the powder form, consumption in any form, and easy usability as flour are driving the growth of the market. In European regions, edible insects are consumed by mixing it with pizza, cheese, and various other food items in order to enrich their taste. Cricket flour is used in producing many food products, thereby propelling the demand for this segment. The protein bars segment holds the second largest market share owing to the increasing demand for high-quality protein and amino acid sources among the end-users. Further, growing competition in the market is compelling the manufacturers to go for high quality, economical, easily available, and nutrition-rich components to achieve the competitive edge in the global edible insect market. CLICK TO DOWNLOAD SAMPLE REPORT 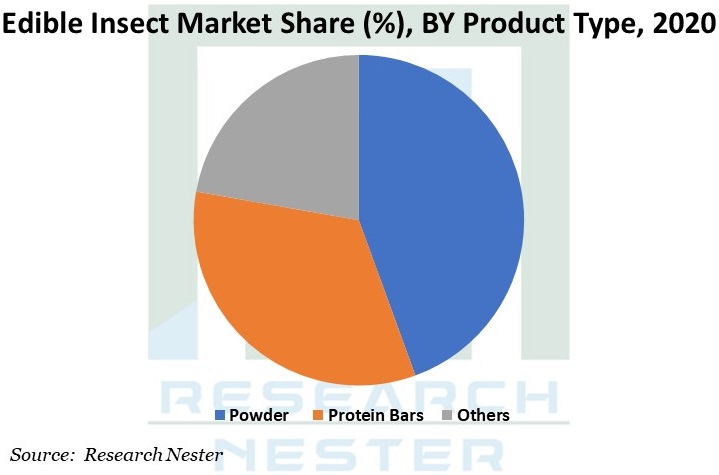 Insect farming would likely be able to produce lower greenhouse gases than that of a livestock. Insects feed on bio-waste, uses considerably less water than that of a livestock, and can be farmed more effortlessly. These are the factors contributing towards the insect farming and has a huge global potential for both animal feed and food production, which, in turn, will lead to the overall market growth of edible insects. Additionally, insect farming also provides essential livelihoods to people in rural areas as minimal technical and capital investment is necessary for basic harvesting and rearing equipment.

Edible insects are extensively used in the manufacturing of low calorie and high protein bars in order to increase the muscle growth. Their easy solubility, neutral taste, and performance-enhancing characteristics making it well-suited with several kinds of protein bar products in the market which is likely to boost the edible insect market growth.

Furthermore, the escalating geriatric population and growing demand for lean protein sources is projected to positively impact the market growth. Furthermore, increasing usability of edible insects in keto diets and raising awareness on the high amino acid, mineral, and vitamin concentration are likely to boost the demand for edible insects.

Safety and health issues, legislative requirements, negative perceptions related to insect consumption among consumers, lack of distribution and networking channels, and lack of awareness are a few of the key factors that might hamper the growth of the global edible insect market.

Our in-depth analysis of the edible insect market includes the following segments:

North America is expected to witness the fastest growth in global edible insect market over the forecast period owing to the growing demand for environmental friendly high protein diets, dislike towards highly processed foods, presence of a huge number of insect farmers and insect-based food product manufacturers, and rising concern for meat production.

In the European region, the demand for edible insects is substantially high on account of minimal risk of disease transfer as matched to animals and the existence of micronutrients and nutrients such as fatty acids, zinc, selenium, phosphorus, manganese, magnesium, iron, and copper.

The Asia Pacific is expected to be the largest region accounting for maximum edible species of insects, with a growing population and rising food demand, the reliance on edible insects is also increasing.  Geographical regions play an important role in the availability of insects and some countries in the Asia-Pacific region are dominated by the particular type of edible insects. In countries such as Thailand and China, edible insects are likely to be sold as a whole to be consumed by people. Also, they are part of street food in these countries. Insect trading is flourishing in cities such as Bangkok and Kinshasa, and there is a higher demand from metropolitan consumers.

The edible insect market in Africa is estimated to witness solid growth on account of demand for edible insects for nutritional value.

The edible insect market is further classified based on region as follows: