Cystic fibrosis is a genetic disorder which affects various organs of the body such as digestive system and lungs. The disorder impacts the functioning of these body organs by damaging the cells which produce body secretions such as sweat, mucus and digestive juices. The condition is caused by alteration of the responsible gene which results in the secretions to become thick and block the passageways in the body.

The symptoms of cystic fibrosis depend on the body organ it is affecting. For instance, if the disease is associated with lungs, the person would show symptoms such as sputum production and persistent cough, wheezing, stuffy nose and recurring lung infections. Cystic fibrosis has no known cure as of now. There are drugs available for cystic fibrosis which helps to relieve the symptoms.

The cystic fibrosis drugs market is anticipated to record a CAGR of around 17% over the forecast period, i.e., 2020-2028. According to the UK Cystic Fibrosis Registry, around 10,509 patients with cystic fibrosis were registered in the United Kingdom in 2018, with about 137 total deaths reported. The market is segmented by drug class, by route of administration, by distribution channel and by region. The segment for drug class is further segmented into pancreatic enzyme supplements, mucolytics, bronchodilators, CFTR modulators and others, out of which, the CFTR modulators segment is anticipated to hold the largest share in the cystic fibrosis drugs market on account of high usage of these drugs for the treatment of cystic fibrosis as compared to other drugs. On the basis of route of administration, the cystic fibrosis drugs market is segmented into oral and injection routes, out of which, the oral route is anticipated to hold the leading share in the market. This can be attributed to the largely present drugs in the form of tablets and capsules globally. CLICK TO DOWNLOAD SAMPLE REPORT 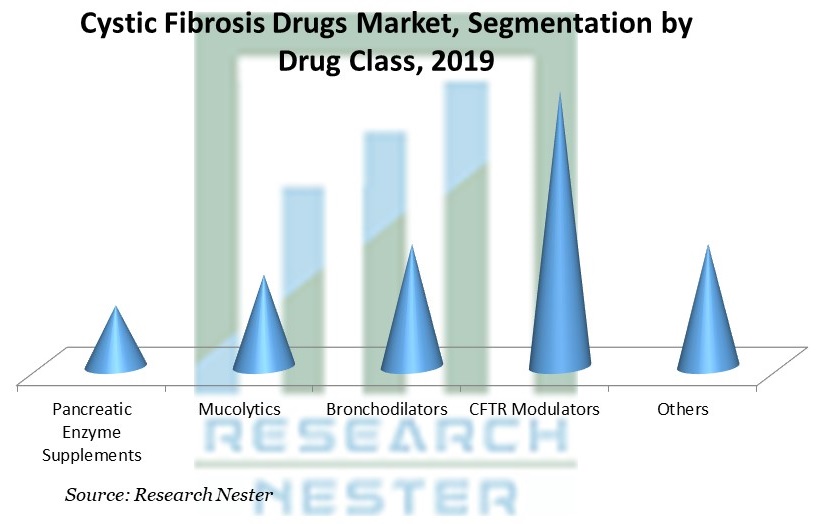 Rising Cases of Cystic Fibrosis to Increase the Market Growth

As per the statistics reported by the Cystic Fibrosis Foundation Patient Registry, more than 30,000 people are living with cystic fibrosis in the United States, and more than 70,000 in the world. Moreover, around 1,000 new cases of the disorder are diagnosed every year, with higher than 75% of people being diagnosed with cystic fibrosis by the age of 2. The growing cases of this condition are predicted to raise the demand for cystic fibrosis drugs and thereby increase the demand for newer and improved medications in the market.

In 2018, the U.S. Food and Drug Administration (FDA) approved SYMDEKO, a combination of tezacaftor and ivacaftor, for the treatment of cystic fibrosis (CF). The drug is in the form of tablets for oral use by patients above the age of 12 years. In addition to this, there are several drugs for cystic fibrosis that are currently in the developmental phase. On the basis of this, the market for cystic fibrosis drugs is anticipated to grow significantly in the next few years.

One of the major restraints of cystic fibrosis drugs is that the cost is high which prevents a large majority of consumers from buying them, especially those belonging to the low and middle income countries. In order to make the drugs accessible to larger parts of the globe, it is essential to make them cost effective in future.

Our in-depth analysis of the cystic fibrosis drugs market includes the following segments:

The market in North America is anticipated to hold the largest share in the market on account of improved healthcare infrastructure in the region which enhances the quality of research and development in laboratories. Moreover, the various initiatives taken by government and other organizations for promoting the growth of this industry is another factor contributing towards this large share. On the other hand, cystic fibrosis market in Asia Pacific is predicted to grow at the highest rate as a result of entrance of leading pharmaceutical companies and drug manufacturers in the region as well as the rising awareness among people about the disorder and its serious implications on health.

The cystic fibrosis drugs market is further classified on the basis of region as follows:

What are the major factors driving the growth of the Cystic Fibrosis Drugs market?

What would be the CAGR of Cystic Fibrosis Drugs market over the forecast period?

Which region will provide more business opportunities for growth of Cystic Fibrosis Drugs market in future?

Asia Pacific region will provide more business opportunities for market growth on account of growing awareness among people about the disease and entrance of leading players in the region.

Who are the major players dominating the Cystic Fibrosis Drugs market?