Brachytherapy catheters are soft, hollow tubes that hold the radioactive material near the target site (cancerous tissue) for a certain time period and are later removed along with the radiation source. This treatment method is highly effective as it targets the cancerous tissue without harming the surrounding normal tissues.

The medical costs for cancer treatment in the US were estimated to be USD 80.2 billion by the Agency for Healthcare Research and Quality in 2015. Out of this, 52% of amount was estimated to be hospital outpatient expenditure and 38% to be inpatient hospital expenditure.

On the basis of end user, the market is segmented into hospitals, radiation therapy centers and others, out of which, the hospitals segment is estimated to witness highest growth in the market during the forecast period as a result of increasing prevalence of cancer leading to growing number of patients along with the availability of high precision techniques and facilities in the hospitals. 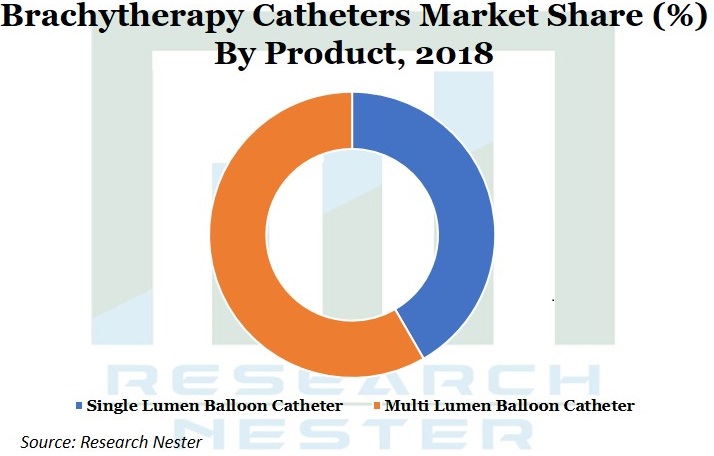 Growing Cases Of Cancer To Expand The Market

According to the American Cancer Society, the number of new cancer cases is estimated to reach 21.6 million globally by the year 2030, while the number of cancer deaths is estimated to reach 13 million. This rapid increase in the number of cancer cases can be attributed to adoption of unhealthy lifestyle by people across the world. Another factor contributing to the growth of cancer among people is the use of tobacco, which accounts for more than 20% of deaths by cancer every year globally, as reported by the same source.

Invasive Nature Of Catheters To Limit The Market Growth

Despite being a minimally invasive technique of radiotherapy, brachytherapy catheters are not favored by everyone since they are required to be placed inside the body. An additional factor restraining the market growth is increased preference of people for external radiation therapy, which is a non-invasive procedure for cancer treatment.

Our in-depth analysis of the brachytherapy catheters market includes the following segments:

The market in North America is anticipated to hold the largest share in brachytherapy catheters market during the forecast period. This growth can be attributed to the presence of major key players in the region along with rising cases of cancer leading to growing number of patients in the hospitals requiring brachytherapy for treatment, mainly in the US.

Europe is estimated to hold the second largest market share in the market on account of growing prevalence of cancer among the population and increasing awareness about improved medical technologies in the region.

The market in Asia-Pacific region is estimated to grow at the highest rate during the forecast period as market players are anticipated to expand their business in the region, mainly in countries such as China, Japan and India. Increasing number of investors entering the market in this region is anticipated to propel the market growth. Moreover, government initiatives to develop healthcare infrastructure in China and India is an additional factor driving the market growth.

The brachytherapy catheters market is further classified on the basis of region as follows: