The global cane sugar market is estimated to garner a revenue of USD 252764.11 Million by the end of 2030 by growing with a CAGR of 1.27% over the forecast period, i.e., 2021 – 2030. Moreover, in the year 2017, the market garnered a revenue of USD 211788.91 Million. The growth of the market can primarily be attributed to growing demand for cane sugar worldwide. Cane sugar is used widely for different industrial purposes. Apart from its utilization as sugar, cane sugar is also used as a source of energy and fuel. It is also used as a raw feed for various materials. Sugar crystals are also widely utilized in food and beverages industry for making different food products. It is also a preferred choice in the pharmaceutical, and cosmetic industries. According to the statistics by the International Sugar Organization (ISO), sugar consumption around the world touched 172.441 Million tonnes by the end of 2018, up from 123.454 Million tonnes in 2001. The statistics also stated that globally, the trade on sugar averaged around 64 Million tonnes/year. In addition, the rising production of sugar cane worldwide, and the increasing exports of the product is also anticipated to drive the market growth in the coming years. Besides this, the growing focus of the government of nations to raise the crop output is also expected to create numerous opportunities for market growth. 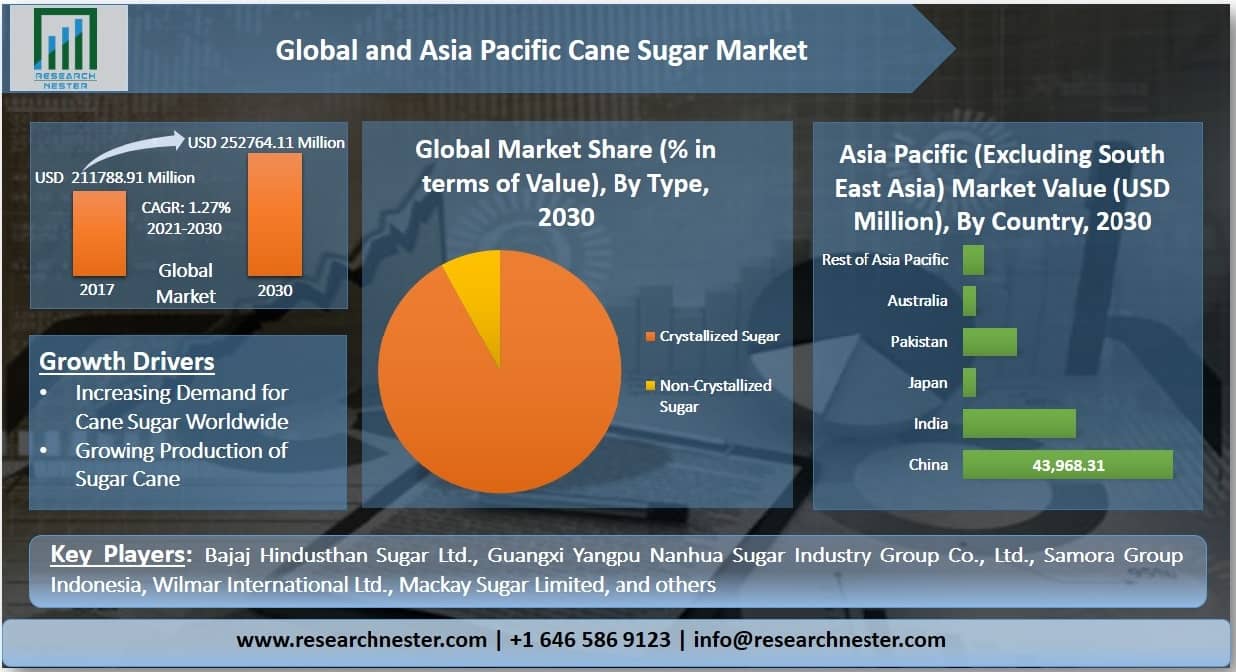 1) What are the major factors driving the growth of the global and Asia Pacific cane sugar market?

Ans: The rising demand for cane sugar globally is one of the major factors anticipated to drive the growth of the market in the coming years.

2) What would be the CAGR of global and Asia Pacific cane sugar market over the forecast period?

3) What are the challenges affecting the global and Asia Pacific cane sugar market growth?

Ans: The rising concerns for the side effects associated with the consumption of sugar is one of the major factors estimated to hamper the market growth.

5) Who are the major players dominating the global and Asia Pacific cane sugar market?

7) What are the segments in the global and Asia Pacific cane sugar market?

Ans: The market is segmented by type, and by region.

8) Which segment captures the largest market size in type segment in the global and Asia Pacific cane sugar market?

Ans: The crystallized sugar segment is also anticipated to grow with the highest CAGR of 1.32% during the forecast period and display significant growth opportunities.