Introduction to Aerospace and Defense Telemetry

Telemetry is a mechanized mode of communication which is generally used for measuring the data received from remote, inaccessible points. It allows the remote measurement and reporting of data and information. This can be done through wired mode (telephone networks, optical links) or wireless mechanisms (radio, ultrasonic and infrared waves). In aerospace and defense sector, telemetry is defined as the communication of information from space (space crafts, satellites) or defense systems to control stations on Earth or remote space vehicles having receiving and transmitting systems.

Aerospace and defense applications are sometimes custom designed around rotating machinery measurements for specific needs. Temperature, pressure, strain, vibration can be transferred to the shaft with the use of single or multi-channel digital wireless methods.

The global aerospace and defense telemetry market is estimated to surpass USD 17.5 Billion by 2027. The market is anticipated to record a CAGR of around 4.8% over the forecast period i.e. 2019-2027. The market is segmented by type, equipment & application. By type, the market is bifurcated into radio and satellite, out of which, the satellite segment is anticipated to have significant growth on account of increase in the use of smart weapons and unmanned aerial vehicles. Satellite telemetry is useful for commercial and military flight test missions. These systems help in monitoring the data that is collected from onboard instrumentation over an RF link. Moreover, missions such as the launch of 104 satellites in a single rocket by ISRO, is anticipated to boost the market growth during the forecast period. CLICK TO DOWNLOAD FREE SAMPLE 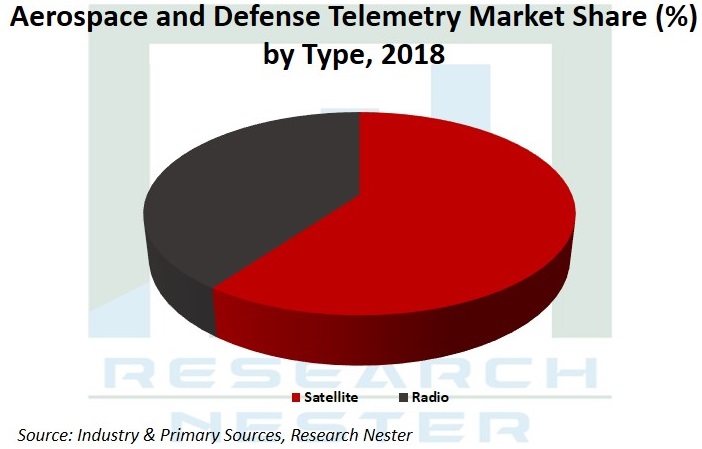 The market is further segmented by equipment into data acquisition unit, telemetry transmitters, flight terminator receivers and others, out of which, data acquisition unit segment is anticipated to have leading shares on account of reduction in the risk of data loss and flexibility & reliability in flight test applications. Moreover, these units are widely used in various applications.

On the basis of application, the market is segmented into aircraft, spacecraft, UAVs and others, out of which, aircraft segment is anticipated to have largest share owing to huge demand for telemetry in the segment.

Telemetry devices are anticipated to gain increased demand owing to an appreciation in the amount of data that is collected in defense and aerospace operations. The application of telemetry is wide and is even used in the field of navigation, communication, military intelligence, space science and is expected to propel the market growth.

The use of telemetry has increased vastly in military applications such as intercepted telemetry in guided missiles, armored vehicles, aircrafts, marine ships, UAVs. This factor is expected to augment the growth of the market during the forecast period.

The defense spending has increased owing to various security threats that are imposed externally as well as internally. Moreover, increasing terrorist attacks, increasing interest of nations towards world dominance and volatile relations between the nations are the factors that expected to contribute to the growth of the market.

Use of New Telemetry

The use of C-band telemetry, which is used in flight test ranges for fixed communication links and radars, is completely new and there are some challenges faced with flight operations in C-band. This factor is expected to hamper the growth of the market during the forecast period.

North America region is anticipated to dominate the market share owing to high investments in the military and space sector. The growth in Middle East and Africa and Asia Pacific region is expected to be higher during the forecast period. Political problems between the Gulf countries have forced the countries to increase their defense expenditure for the modernization of equipment. Countries such as Saudi Arabia, UAE, Qatar, and Israel are restoring their military aviation as well as commercial sector. Moreover, the demand for unmanned aerial vehicles is high in the region. Emerging countries in the Asia Pacific region such as India and China have invested huge amounts for modernizing their armed forces. These activities will collectively have a positive impact on the growth of the market. 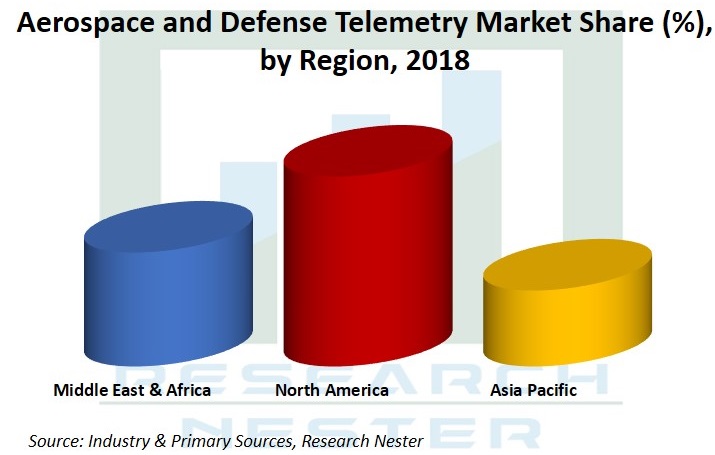 The global aerospace and defense telemetry market is further classified on the basis of region as follows: