Extensive insights into the Growth of Gin Market amidst COVID-19

Gin was invented in an experiment to create remedy for kidney problems where a doctor combined juniper berries and alcohol. It is a distilled alcoholic drink which can be redistilled with fruits, seeds and grains among other sources of sugar in order to add flavors. Gin is a drink that contains alcoholic properties and considered under spirit industry. There are three types of gin based on the process of manufacturing: post distilled gin, compound gin and column distilled gin.

Popularly served in cocktails, gin has a predominant flavor of Juniper and is a popular category of spirit across the world with flavors from botanicals such as orange, lemon peel etc. Its alcohol by volume (ABV) ranges from 36-50%. When used in moderation, Gin has medicinal properties that help in fighting various forms of illnesses and aches such as arthritis, cough, lung congestion and water retention among others.

The market is observing robust growth on account of growing number of bars and restaurants around the globe. Additionally, changing consumer trends towards gin consumption and increasing demand from emerging economies is expected to support the growth of the market in upcoming years.

The gin market is anticipated to record a CAGR of around 4.2% over the forecast period i.e. 2018-2023. The market is segmented by gin type into standard, economy, premium and super-premium gin, out of which, the standard gin has the highest sales in terms of volume. Further, the premium and super-premium segments are estimated to grow significantly on the back of growing rate of premiumization that is impacting the consumers’ purchasing decisions pertaining to premium gin. CLICK TO DOWNLOAD FREE SAMPLE 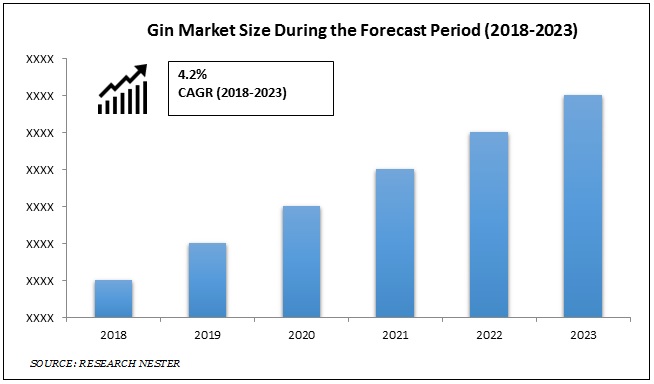 Other Statistics Involved in Gin Industry

With 44% share, Philippines dominate the gin market in South-East Asia at present. India has the long history for making gin because from the ancient time the country has been using gin to cure diseases and India has the fifth largest market share in global gin market at present.

The market share of Australia is on a continuous rise. In 2013, the number of alcohol consumers reached 637,000. The age group between 24 to 35 years has the maximum inclination towards alcohol consumption which plays a major role behind the significant growth of gin market globally. Further the consumer base is projected to rise in Australia as the age bracket between 24 and 35 years is on a continuous expansion (24-35 age group population swelled from 125,000 in 2009 to 206,000 in 2013).

With growing urbanization, there is a steep rise in alcohol consumption around the globe which has led to the opening of large number of clubs, bars and restaurants. This has further increased the demand for superior liquor beverages which is expected to boost the market shares.

Furthermore, the growing trend of electronic commerce and retailing is playing a major role behind the expansion of the gin industry around the world. Additionally, the presence of large number of distilleries, especially in the U.K. combined with growing innovation and experimentation with botanicals is estimated to support the growth of the market in future.

The high rate of consumption is contributing to numerous health problems such as liver cirrhosis, cancer, violence and accidents among other problems. According to the WHO (World Health Organization), the harmful use of alcohol results in approximately 2.5 million deaths each year. Such ill effects along with high cost of gin is expected to hinder the growth of the market over the forecast period.

By ABV (Alcohol By Volume)

Europe is expected to have largest market share in terms of consumption where Spain, Belgium, Ireland, France, Germany, Netherlands and the United Kingdom are among the highest revenue generating countries in the region. In Europe, the revenue generated from gin consumption was more than USD 2.5 Million as compared to USD 2 Million in North America during the year 2018. Further, North America is estimated to have second largest share owing to the presence of Canada and the United States as the dominating countries with gin consumption in the region.