The global geotextiles market is estimated to grow at a CAGR of ~11% over the forecast period, i.e., 2022 – 2030. The growth of the market can be attributed to the various advantages of geotextiles, such as, erosion resistance, higher strength and durability, and overlay stress absorption. Moreover, use of geotextiles protects the road or pavement from degradation by soil, while also safeguarding the biodiversity of the soil. Moreover, geotextiles also provide greater stability to roads, and other infrastructures. Growing construction activities across the world is estimated to boost the market growth. Furthermore, natural geotextiles are being extensively used to curb deforestation by reducing soil erosion and degradation of vegetation. Additionally, geotextiles are used to regenerate forest areas. The growing government concerns to reduce deforestation and loss of vegetation is estimated to boost the market growth. According to the Food and Agriculture Organization of the U.N., since 1990, over 420 million hectares of forest have been converted into industrial land. Between 2015 to 2020, the annual rate of deforestation reached 10 million hectares per year. 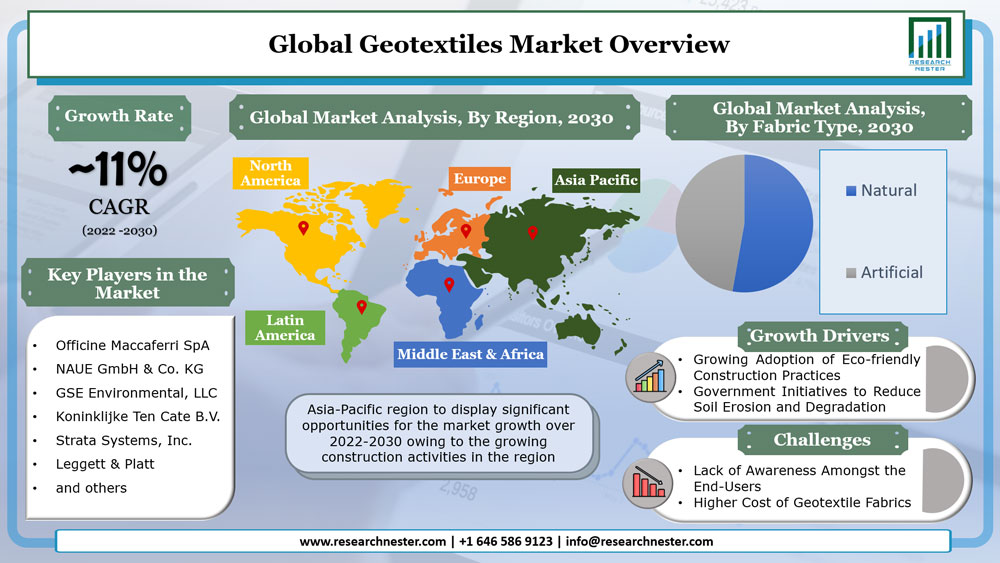 The market is divided by fabric type into natural, and artificial, out of which, the natural segment is anticipated to hold the notable share in the global geotextiles market over the forecast period on account of growing adoption of natural products in construction industry, and increasing awareness amongst people regarding environment conservation. Based on application, the market is segmented into heavy construction, building and pavement construction, hydrogeology, environmental engineering, and others, out of which, the building and pavement construction segment is estimated to garner significant share over the forecast period, on the back of various advantages of geosynthetics, such as, resistance to UV degradation.

On the basis of geographical analysis, the global geotextiles market is segmented into five major regions including North America, Europe, Asia Pacific, Latin America and Middle East & Africa region. The market in Asia Pacific region is estimated to witness noteworthy growth over the forecast period on the back of increasing highway and sidewalk construction activities in developing nations, such as, China and India. As per the data by the India Brand Equity Foundation (IBEF), the ministry of Road Transport and Highways has allocated a budget of USD 14.85 billion for FY 2021-22, while the government also aims to construct 23 new national highways by 2025.

Moreover, rising government initiatives to restore vegetation and forests, is also projected to boost the market growth in the region.

The market in the North America region is anticipated to garner notable market share during the forecast period on account of increasing investment on eco-friendly construction methods, along with growing construction activities. In 2018, about USD 90 billion were spent on highway construction in the U.S., which is projected to grow to about USD 105 billion by 2022. 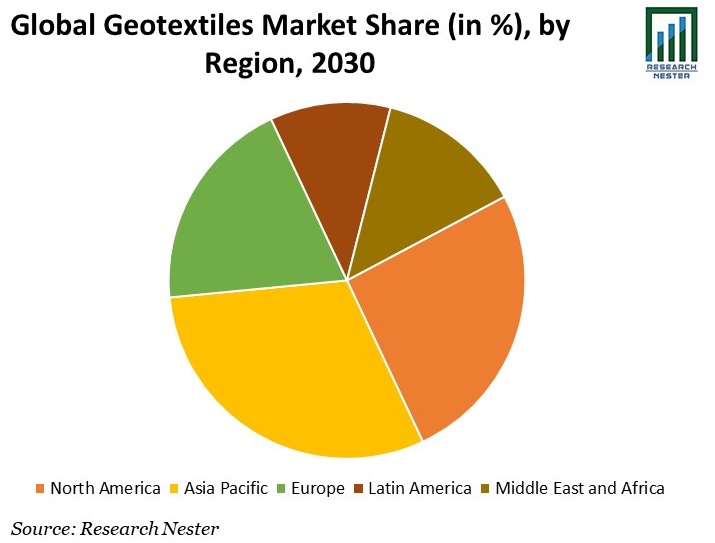 The global geotextiles market is further classified on the basis of region as follows:

Our in-depth analysis of the global geotextiles market includes the following segments:

1) What are the major factors driving the growth of the geotextiles market?

Ans: The growing environmental awareness amongst authorities, as well as, public to boost the market growth.

2) What would be the CAGR of geotextiles market over the forecast period?

3) What are the challenges affecting the geotextiles market growth?

Ans: Lack of awareness amongst the end-users is estimated to hamper the market growth.

4) Which region will provide more business opportunities for growth of geotextiles market in future?

Ans: Asia-Pacific region is estimated to display significant opportunities for the market growth over the forecast period owing to the growing construction activities in the region.

5) Who are the major players dominating the geotextiles market?

7) What are the segments in the geotextiles market?

Ans: The market is segmented by type, fabric type, application, and by region.

8) Which segment captures the largest market size in fabric type segment in the geotextiles market?

Ans: The natural segment is anticipated to hold largest market over the forecast period and display significant growth opportunities.