The global geniculate ganglionitis drugs market is estimated to grow at CAGR of ~5% over the forecast period, i.e., 2022 – 2030. Geniculate ganglionitis, also known as, Ramsay Hunt syndrome, or Hunt's neuralgia, is a neurological disorder caused by infection with the same virus which causes chickenpox. In this syndrome, the virus infects the facial nerve connected to the ear, which is why the syndrome is characterized by chronic pain in middle and inner ear. The growth of the market can be attributed to the rising cases of chickenpox and shingles, as this is the most common cause of geniculate ganglionitis. Before the mass vaccine drives for chickenpox were initiated, over 100 deaths and more than 4 million cases of chickenpox were reported every year. After the vaccine drives, since 1996, this has reduced significantly. As of 2019, less than 350,000 cases of chickenpox were reported worldwide. Moreover, the developing public healthcare infrastructure and high government expenditure for the development of new drugs is anticipated to significantly fuel the growth of the market. 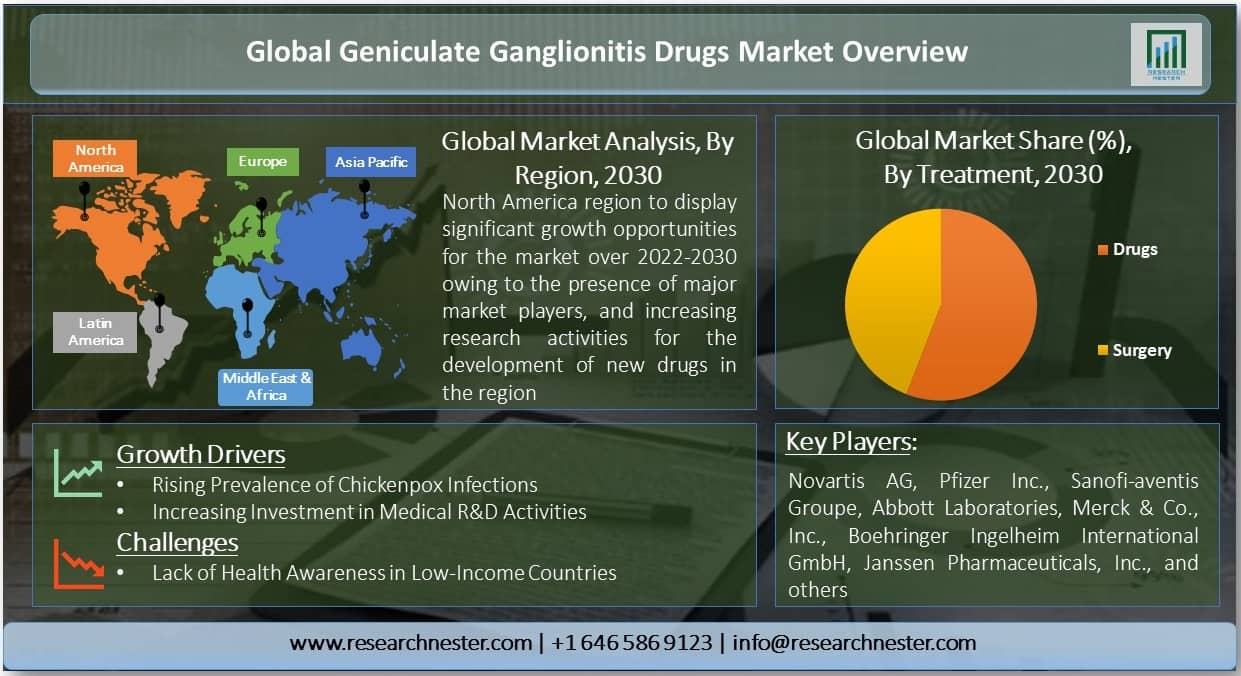 On the basis of geographical analysis, the global geniculate ganglionitis drugs market is segmented into five major regions including North America, Europe, Asia Pacific, Latin America and Middle East & Africa region. The market in Asia Pacific region is estimated to witness substantial growth over the forecast period on the back of higher cases of chickenpox and other viral infections due to lack of health awareness and poor healthcare system in developing nations, such as, India, Vietnam, Bangladesh, and Indonesia. Similarly, the market in Latin America is estimated to provide significant opportunities for the market to grow by the end of 2030, owing to absence of proper vaccine drives to protect for VZV virus, and lack of proper treatment facilities in the region.

The market in the North America region is anticipated to gain the largest market share throughout the forecast period on account of presence of major pharmaceutical companies manufacturing drugs, and increasing research activities for the developing new drugs. 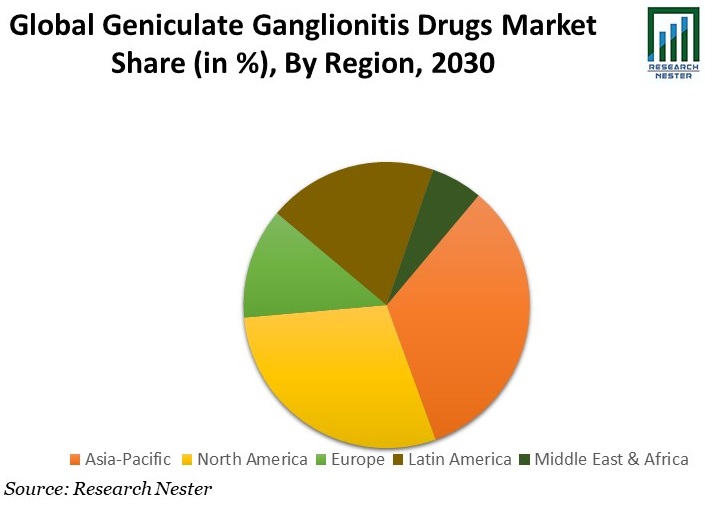 The global geniculate ganglionitis drugs market is further classified on the basis of region as follows:

1) What are the major factors driving the growth of the geniculate ganglionitis drugs market?

Ans: The growing cases of chickenpox and severe symptoms of the disorder to boost the market growth.

2) What would be the CAGR of geniculate ganglionitis drugs market over the forecast period?

3) What are the challenges affecting the geniculate ganglionitis drugs market growth?

Ans: Lack of health awareness in low-income countries is estimated to hamper the market growth.

4) Which region will provide more business opportunities for growth of geniculate ganglionitis drugs market in future?

Ans: The market in the Asia Pacific is estimated to witness growth with highest CAGR over the forecast period, owing to the increasing infection of virus, and developing healthcare system.

5) Who are the major players dominating the geniculate ganglionitis drugs market?

7) What are the segments in the geniculate ganglionitis drugs market?

Ans: The market is segmented by treatment, drug type, distribution channel, and by region.

8) Which segment captures the largest market size in treatment segment in the geniculate ganglionitis drugs market?

Ans: The drugs segment is anticipated to hold largest market size over the forecast period and display significant growth opportunities.