·  June 16, 2022: Merck and Pfizer came together to test patients with type 2 diabetes and atherosclerotic cardiovascular disease with their SGLT2 Inhibitor STEGLATROTM (ertugliflozin) and primary endpoint in VERTIS CV trials.

The gangrene treatment drugs market is estimated to garner a sizeable revenue by growing at a significant CAGR over the forecast period, i.e., 2021 – 2029. The growth of the market can be attributed to factors such as the increasing prevalence of diabetes and its related complications, growing demand for sophisticated therapies and rising number of incidences of severe traumatic injuries. According to the World Health Organization (WHO), diabetes is a major cause of blindness, stroke and lower limb amputation. In 2019, 1.5 million deaths were caused by diabetes. In 2019 Also, hike in healthcare expenditure in developed countries is anticipated to act as a growth driver for the market in the future. Along with these, growth in the total obese population worldwide is projected to offer ample opportunities to market growth in the coming years.

The market is segmented by condition type into dry, wet, internal, gas gangrene, and others out of which, the gas gangrene segment is anticipated to drive notable growth in the gangrene treatment drugs market on account of rise in occurrence of arterial diseases, colon cancer and muscle injuries. Apart from this, it is a very common type of gangrene, which can also be credited to boost the demand for treatment drugs in the near future. Furthermore, on the basis of treatment type, the hyperbaric oxygen therapy is expected to gather the largest market share during the forecast period owing to the increasing incidences of diabetic foot ulcers, speedy healing process of the treatment and its effectiveness in killing bacteria. 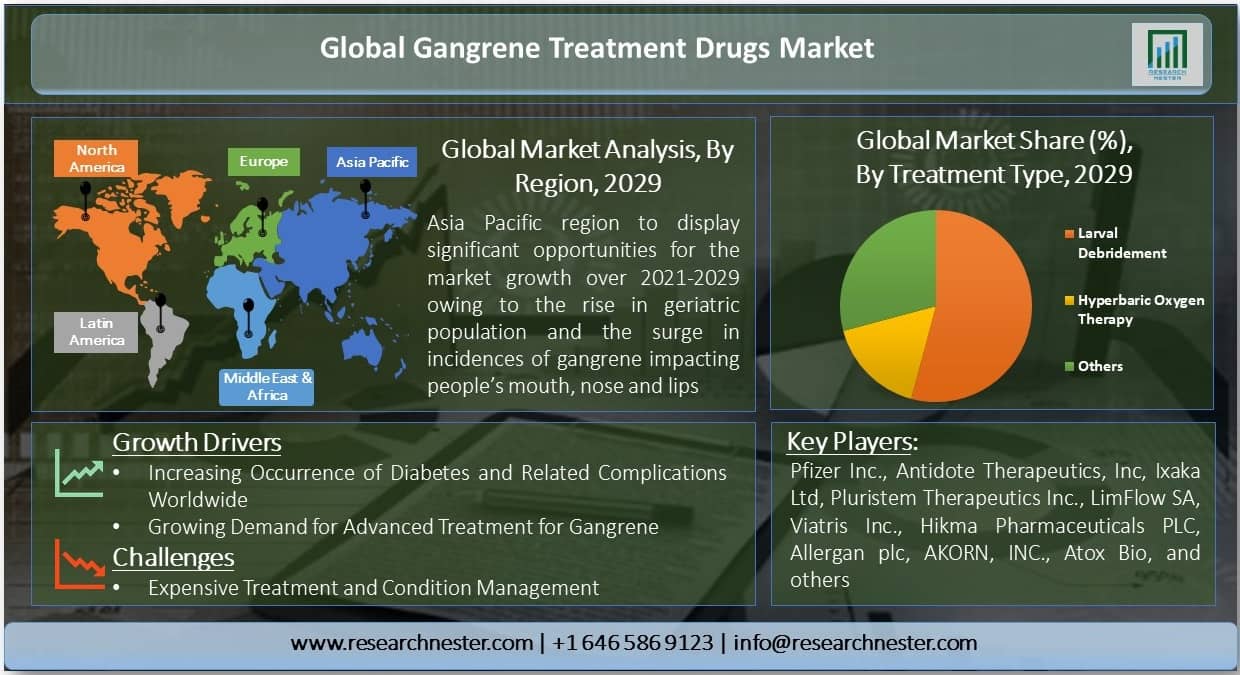 On the basis of geographical analysis, the gangrene treatment drugs market is segmented into five major regions including North America, Europe, Asia Pacific, Latin America and the Middle East & Africa. The market in the North America region is estimated to grab the largest share over the forecast period on the back of strong presence of leading industry players, increasing healthcare budget and growing technological advancements in the healthcare sector. As per the data provided by the OECD, in 2017, the health spending in the United States was the highest, at 17.1% of country’s total GDP share. Additionally, Europe is evaluated to be the second largest shareholder in the market in the coming years ascribing to the growing investments in R&D activities in the region. However, the market in Asia Pacific is expected to grow with the highest CAGR during the forecast period, which can be credited to the growing number of cases of gangrene affecting mouth, nose and lips, and the increasing geriatric population in the region.

The gangrene treatment drugs market is further classified on the basis of region as follows:

Our in-depth analysis of the gangrene treatment drugs market includes the following segments:

What are the major factors driving the growth of the gangrene treatment drugs market?

What would be the CAGR of gangrene treatment drugs market over the forecast period?

What are the challenges affecting the gangrene treatment drugs market growth?

High cost of treatment and management of the condition estimated to hamper the market growth.

Which region will provide more business opportunities for growth of gangrene treatment drugs market in future?

Asia Pacific will provide more business growth opportunities on the back of increasing number of cases of gangrene affecting people’s mouth, nose and lips.

Who are the major players dominating the gangrene treatment drugs market?

What are the segments in the gangrene treatment drugs market?

The market is segmented by condition type, treatment type, distribution channel, and by region.

Which segment captures the largest market size in the treatment type segment in the gangrene treatment drugs market?

The hyperbaric oxygen therapy segment is anticipated to hold largest market size and is estimated to grow at a notable CAGR over the forecast period and display significant growth opportunities.