Fundus camera is defined as a low power microscope with an attached camera. Fundus camera is based on the indirect ophthalmoscope.  It is widely used in various applications such as fluorescein angiography, external photograph, paired optic disk images, and fundus imaging. It is also used to diagnose retinal disorders.

On the basis of product type, non-mydriatic fundus cameras has been the largest segment in 2016 and it is expected to garner at a CAGR of 7.1% during the forecast period. Furthermore, hybrid fundus cameras by product type segment accounted for the highest CAGR during the forecast period owing to possessing multiple technologies in a single device. 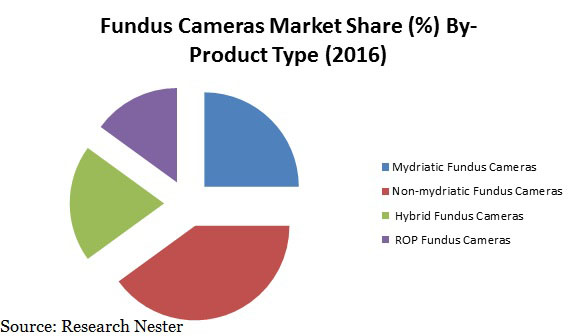 In terms of regional platform, North America is projected to lead the market by the end of 2024. Further, U.S. and Canada are expected to be the dominating countries during the forecast period owing to growing adoption of technologically advanced products. Moreover, high prevalence of retinal disorders in this region is also envisioned to foster the growth of fundus camera market. Moreover, presence of major key players of fundus camera in North America region is believed to foster the growth of fundus camera market.Europe accounted for the second largest market of fundus camera in terms of revenue in 2016. Additionally, the growth of Europe region can be attributed to various factors such as rising adoption of advanced healthcare technology and rapid urbanization. Likely, the major countries witnessing the augmented demand for fundus camera include the Western European countries.CLICK TO DOWNLOAD FREE SAMPLE

Our in-depth analysis has segmented global fundus camera market into the following segments:

Global fundus camera market is further classified on the basis of region as follows:

However, high cost associated with the fundus camera is anticipated to dampen the growth of fundus camera market by the end of 2024.

The global fundus camera market is segmented as follows: