The global fortified food market is estimated to garner a sizeable revenue by growing at a significant CAGR over the forecast period, i.e., 2021 – 2029. The growth of the market can be attributed to the growing health consciousness among people and increasing disposable income of consumers on a global level. Additionally, as fortified foods also provide medicinal benefits along with essential nutrients and high energy gain, the demand for these products is anticipated to witness a hike in the near future. Growing investment to develop new varieties of fortified foods is also projected to fuel market expansion. Rising emphasis of leading food and beverage manufacturers to produce enriched foods is a major factor assessed to offer lucrative growth opportunities to the market. It is calculated that by 2022, the functional foods market will generate a revenue of approximately USD 320 billion.

The market is segmented by nutrient composition into vitamins, carbohydrates, proteins, minerals, probiotics and others, out of which, the vitamins segment is evaluated to hold the largest share in the fortified food market by the end of 2029 on account of increasing prevalence of disorders resulting from vitamin deficiency. According to the World Health Organization, more than 2 billion people suffer from the deficiency of micronutrients globally. However, the segment for probiotics is expected to grow with the highest CAGR during the forecast period. This can be credited to the advantages of consuming probiotics regularly such as improved immune function, restoration of healthy bacteria in the body and management of excessive weight. Furthermore, on the basis of product, the basic foods segment is estimated to gain slightly more traction in the market in 2021 owing to the high production of dairy products fortified with Vitamins, especially Vitamin D. 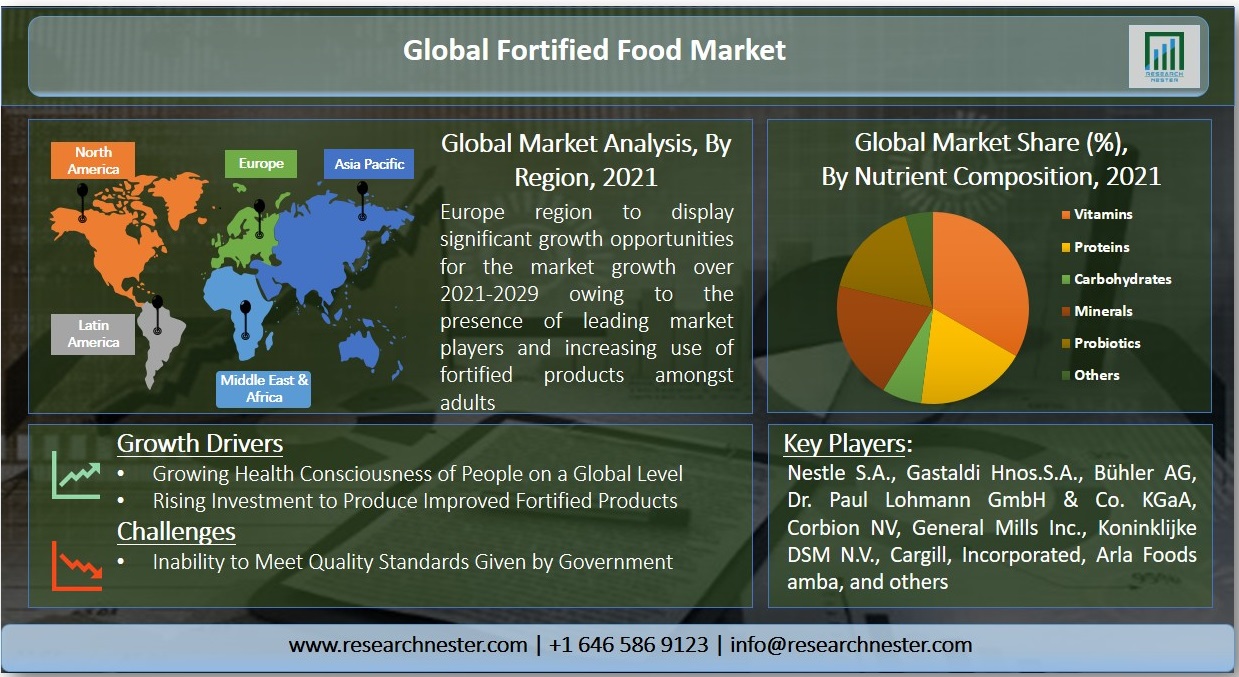 Regionally, the fortified food market is segmented into five major regions including North America, Europe, Asia Pacific, Latin America and Middle East & Africa. The market in Asia Pacific region is estimated to witness noteworthy growth over the forecast period on the back of increasing demand for nutrition enriched foods and promotion of fortified products by the government of countries, namely China, Japan, South Korea and India. Along with these growing occurrence of vitamins and minerals deficiency among people is also predicted to gauge market growth in this region in the coming years. On the other hand, Europe occupies the largest revenue share in the market and is expected to offer abundant growth opportunities over the forecast period owing to the strong presence of food & beverage industries in the region and growing consumption among adult and older populations. Our analysis reveals that Europe is predicted to generate the largest food industry revenue in 2021, amounting to approximately USD 1.75 million. 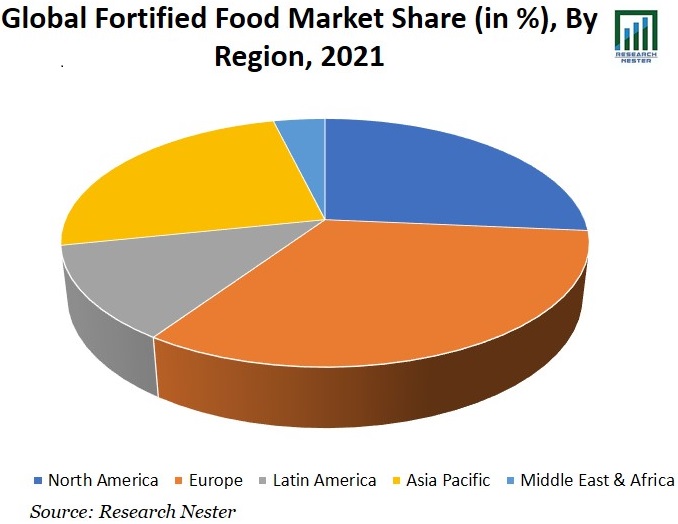 The fortified food market is further classified on the basis of region as follows:

Our in-depth analysis of the fortified food market includes the following segments:

What are the major factors driving the growth of the fortified food market?

Increasing health consciousness of people and shift in focus of food manufacturers to produce fortified products are major growth drivers of the market.

What would be the CAGR of fortified food market over the forecast period?

What are the challenges affecting the fortified food market growth?

Lack of maintenance of hygiene standards by fortified foods manufacturers is estimated to hamper the market growth.

Which region will provide more business opportunities for growth of fortified food market in future?

Europe is estimated to offer more business opportunities on the back of strong presence of leading market players.

Who are the major players dominating the fortified food market?

What are the segments in the fortified food market?

The market is segmented by nutrient composition, product, distribution channel, and by region.

Which segment captures the largest market size in the product segment in the fortified food market?

The basic foods segment is anticipated to hold largest market size and is estimated grow at a noteworthy CAGR over the forecast period and display significant growth opportunities.