The global foot orthotic insoles market is estimated to garner a revenue of ~USD 7 billion by the end of 2035 by growing at a CAGR of ~7% over the forecast period, i.e., 2023 – 2035. Further, the market generated a revenue of ~USD 4 billion in the year 2022. The growth of the market is primarily attributed to the rising incidence of other foot ailments, such as, diabetic foot ulcers, as well as the rising prevalence of chronic diseases such as diabetes. According to the data from National Health Interview Survey (NHIS) by CDC, in 2018 around 51.8% of adults in the US were diagnosed with at least one chronic condition out of ten. 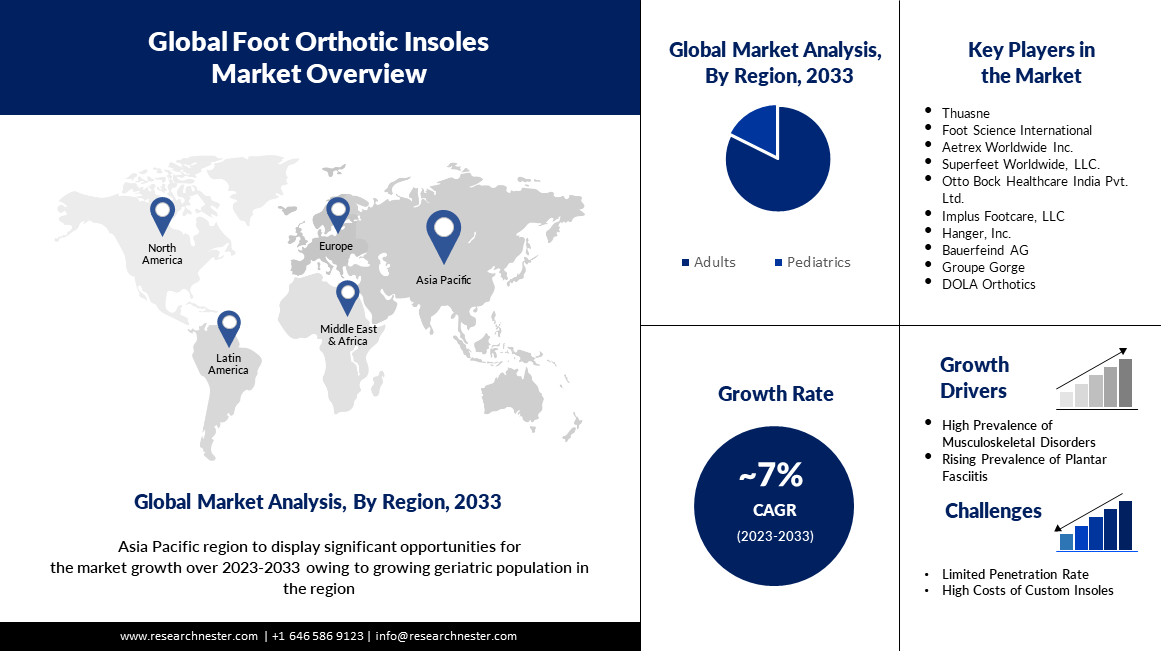 Moreover, the rising prevalence of osteoarthritis is also expected to fuel market growth. Osteoarthritis affects both hands, knees, hips, and spine more frequently than other joints as it develops as the protecting collagen in various joints gradually corrodes. the orthopedic insoles support weight distribution such that pressure on the feet's delicate areas is reduced. Additionally, they also offer support and padding to ease the strain on the feet's numerous joints. Insoles with plenty of arch support help rectify incorrect gait patterns and guarantee neutral alignment to lessen the strain on the knees, hips, and back. Others with osteoarthritis often find massage especially comforting. The researchers found that there were more cases of OA than ever before, with a rise of approximately 112% from about 240 million cases in 1990 to over 520 million cases in 2019.

The global foot orthotic insoles market is segmented and analyzed for demand and supply by age group into adults and pediatrics. Out of these, the adult segment is anticipated to garner the largest revenue by the end of 2035, backed by the increasing adult population. More than three-quarters (77.9%), or 258.3 million, of the 331.4 million persons enumerated by the U.S. Census Bureau in 2020 were adults.

The Asia Pacific foot orthotic insoles market, amongst the market in all the other regions, is projected to hold the largest market share by the end of 2035. This can be attributed to the growing geriatric population in the APAC region, as orthopedic diseases are more common amongst the elderly. In 2019, there were 703 million people worldwide who were aged 65 years or older. The number of elderly people is expected to more than triple to 1.5 billion by 2050. 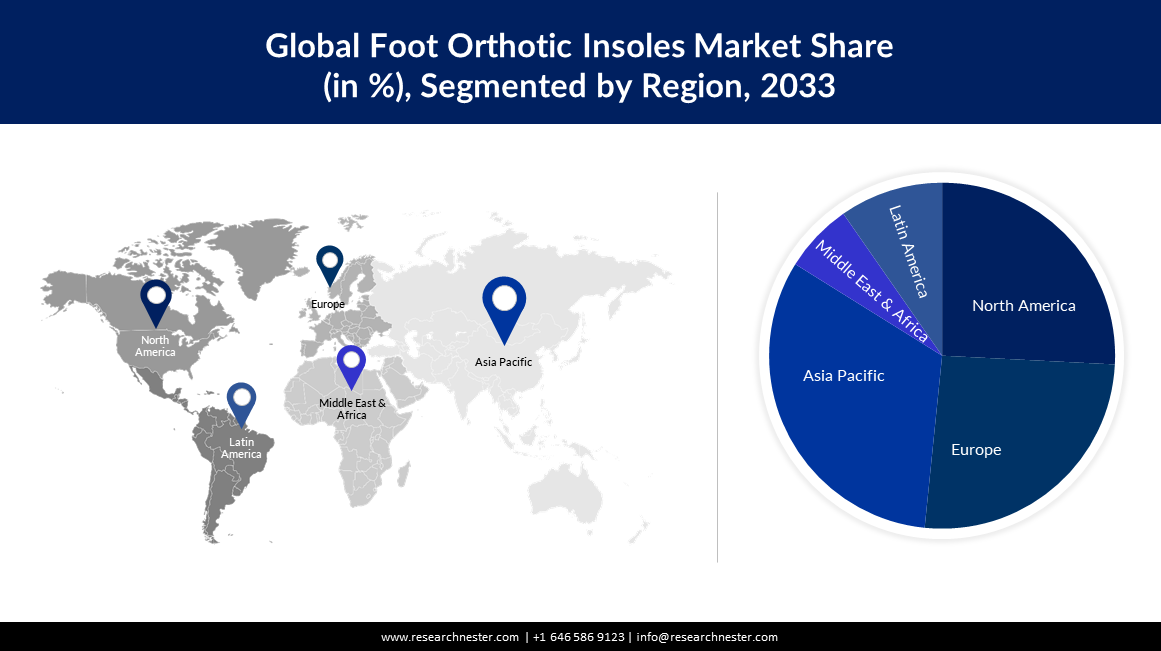 What are the major factors driving the growth of the foot orthotic insoles market?

The major factors driving the growth of the market are the high prevalence of musculoskeletal disorders, the rising prevalence of plantar fasciitis, the growth in rheumatoid arthritis, and others.

What would be the CAGR of foot orthotic insoles market over the forecast period?

What are the challenges affecting the foot orthotic insoles market growth?

Limited penetration rate, high costs of custom insoles, and weak supply chain are some of the major factors expected to hinder the growth of the market.

Which region will provide more business opportunities for growth of foot orthotic insoles market in future?

The market in Asia Pacific region is projected to hold the largest market share by the end of 2033 and provide more business opportunities in the future.

Who are the major players dominating the foot orthotic insoles market?

What are the segments in the foot orthotic insoles market?

The market is segmented by type, application, age group, industry vertical, and by region.

Which segment captures the largest market size in the age group in the foot orthotic insoles market?

The adults segment is anticipated to garner the largest market size by the end of 2033 and display significant growth opportunities.