Extensive insights into the Growth of Faceplates Market amidst COVID-19

The global faceplates market is estimated to attain a noteworthy CAGR during the forecast period, i.e., 2021-2029, on the back of increasing applications of faceplates in various commercial, industrial and residential spaces. The growth of the market can further be attributed to the global surge in commercialization and infrastructural development, which has led to an increase in the demand for faceplates worldwide. Moreover, growing demand for custom designer faceplates in modular switch boards to provide enhanced interior aesthetic decor, and the need to protect the electrical cables from any external damage, followed by the rapid development in sub urban areas, especially in the construction of residential and commercial establishments, are some of the significant factors anticipated to drive the market growth during the forecast period. Furthermore, the growing investments for smart cities is also anticipated to create numerous opportunities for the market growth in the coming years. 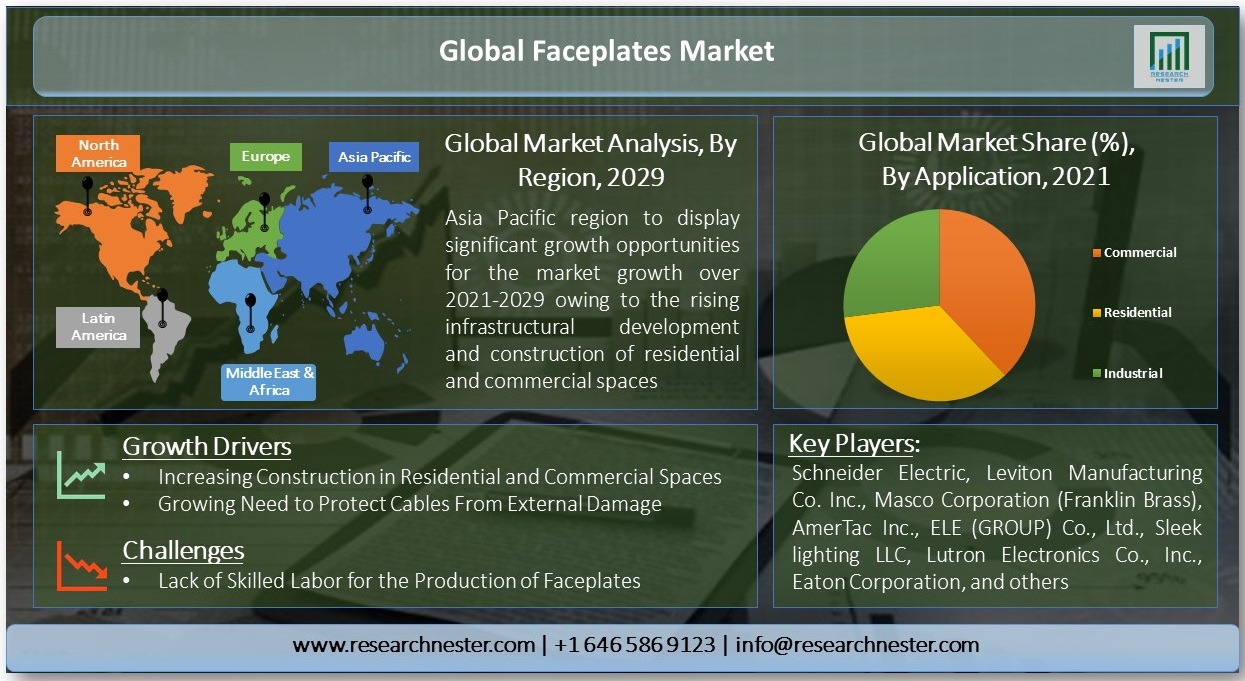 The market is segmented by product type into socket faceplates, switch panels, ethernet wall plates and others. Additionally, the market is also segmented by application into residential, commercial and industrial, out of which, the commercial segment is anticipated to hold the largest market share by the end of 2021. The growth of the segment can be attributed to the growing need for offices and working complexes for employment amongst the rising population. Moreover, the rising development of smart buildings on the back of growing investments for smart cities, is also estimated to boost the growth of the segment during the forecast period. Research from secondary sources stated that as of 2020, the total expenditure for the development of smart cities from both public and private companies was valued over USD 600 billion. CLICK TO DOWNLOAD SAMPLE REPORT

Out of these regions, the North America market is anticipated to hold a significant share by the end of 2029. The growth of the market can be attributed to the growing infrastructural development in the region, backed by the need for housing and employment facilities amongst the North American population. According to the statistics by the World Bank, over 80% of North America’s total population lives in urban areas, which is anticipated to increase the demand for housing and employment facilities. Moreover, secondary research analysis stated that the United States is the largest construction market in the world, with expenditure amounting to more than 1 billion. Additionally, as of 2020, the construction industry in the United States holds over 4% of the GDP of the nation.  Furthermore, increasing investments for building new commercial infrastructures in the region is also estimated to boost the market growth by the end of 2021. According to the data by the U.S. Energy Information Administration (EIA), the total number of commercial buildings in the United States increased by 6% from 2012 to 2018.

Alternatively, the Asia Pacific market is estimated to experience a remarkable CAGR over the forecast period and garner notable revenues on account of the escalating urbanization coupled with the growing population in the region. As per the data of World Bank, the GDP per capita growth (annual %) in the East Asia & Pacific region recorded 3.16% as of 2019. 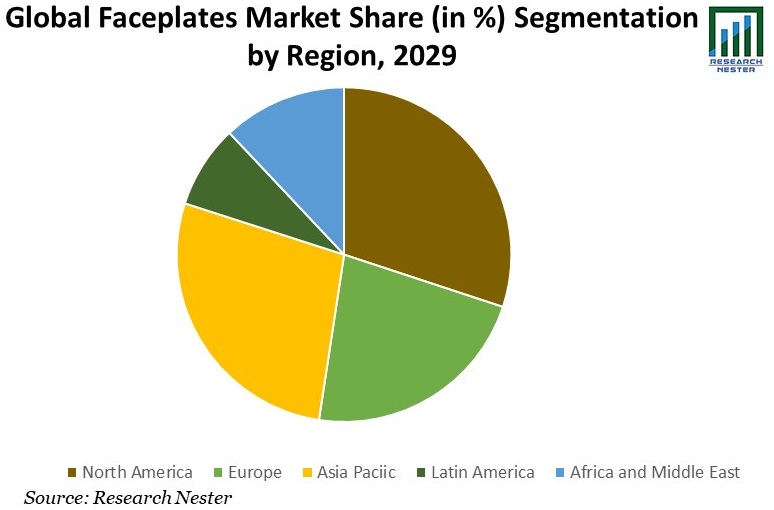 The global faceplates market is further classified on the basis of region as follows:

Our in-depth analysis of the global faceplates market includes the following segments:

What are the major factors driving the growth of the faceplates market?

Increasing application of faceplates in construction of buildings, offices and factories is estimated to be one of the key factors driving the market growth.

What would be the CAGR of faceplates market over the forecast period?

The market is anticipated to attain a noteworthy CAGR over the forecast period, i.e., 2021-2029.

What are the challenges affecting the faceplates market growth?

Requirement of highly skilled labor for the production of faceplates is estimated to hamper the market growth.

Who are the major players dominating the faceplates market?

What are the segments in the global faceplates market?

The market is segmented by product type, application, distribution channel and by region.

Which segment captures the largest market size in the application segment in the global faceplates market?

The commercial segment is anticipated to hold the largest market size owing to the application of faceplates in office spaces and is estimated to grow at a noteworthy CAGR over the forecast period and display significant growth opportunities.