The global encephalitis drugs market is estimated to grow at CAGR of ~15% over the forecast period, i.e., 2022 – 2030. The growth of the market can be attributed to the increasing prevalence of primary as well as secondary encephalitis, which is caused by viral infection. Encephalitis can be deadly as it causes swelling of the brain, speech and hearing impairments, and paralysis. It is more common in children and older population, or patients undergoing immunotherapy. Rising geriatric population, and increasing prevalence of auto-immune diseases are estimated to boost the market growth. 9.318% of the global population ages above 65 years, as of 2020, according to the statistics by the World Bank. As per the British Society of Immunology, rheumatic diseases such as rheumatoid arthritis are increasing at 7% as of 2019, while endocrinological conditions are increasing by 6.3%. The increasing investment in the R&D activities in the medical field, along with rising health awareness amongst the people is estimated to boost the market growth. Moreover, the developing public healthcare infrastructure and high government expenditure for the development of new drugs is anticipated to significantly fuel the growth of the market. 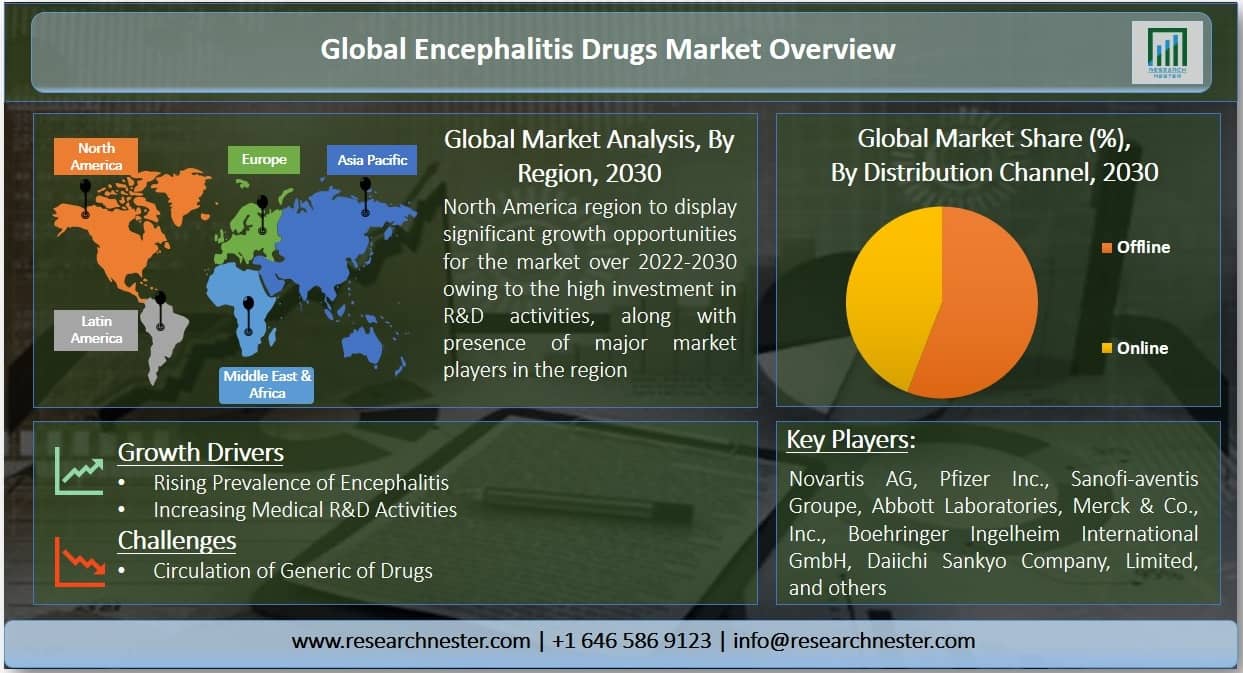 The global encephalitis drugs market is bifurcated by distribution channel into offline and online segments. The offline segment is further segmented into hospital pharmacies, drug stores and others, out of which, the hospital pharmacies segment is anticipated to garner the highest market revenue over the forecast period, owing to the easy accessibility of drugs to the patients admitted in hospitals. The growing patient pool of encephalitis is estimated to boost the growth of the segment. CLICK TO DOWNLOAD SAMPLE REPORT

On the basis of geographical analysis, the global encephalitis drugs market is segmented into five major regions including North America, Europe, Asia Pacific, Latin America and Middle East & Africa region. The market in Asia Pacific region is estimated to witness substantial growth over the forecast period on the back of emergent healthcare infrastructure and improved medical facilities available in developing nations, such as, India, Bangladesh, and Indonesia. Moreover, high geriatric population, along with the growing disposable income are estimated to boost the market growth.

The market in the North America region is anticipated to gain the largest market share throughout the forecast period on account of high healthcare expenditure, presence of major pharmaceutical companies, and increasing research activities for the development of new drugs. According to the statistics by the World Bank, in 2018, North America spent USD 10,050.516 for the healthcare of every individual. The total healthcare expenditure accounted for 16.415% of the total GDP of North America. 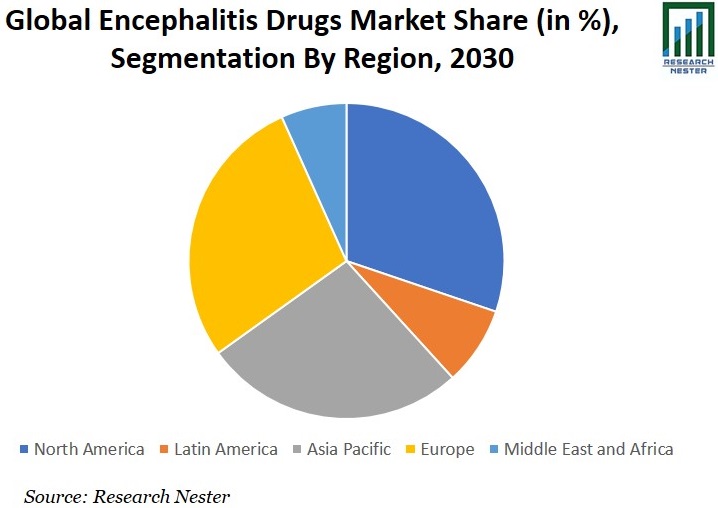 The global encephalitis drugs market is further classified on the basis of region as follows:

Our in-depth analysis of the global encephalitis drugs market includes the following segments:

What are the major factors driving the growth of the encephalitis drugs market?

Increasing prevalence of encephalitis and deadly nature of this disease are estimated to boost the market growth.

What would be the CAGR of encephalitis drugs market over the forecast period?

What are the challenges affecting the encephalitis drugs market growth?

The increasing circulation of generic drugs is estimated to hamper the market growth.

Which region will provide more business opportunities for growth of encephalitis drugs market in future?

The market in the North America region is estimated to provide most growth opportunities over the forecast period, owing to the presence of major pharmaceutical companies in the region.

Who are the major players dominating the encephalitis drugs market?

What are the segments in the encephalitis drugs market?

The market is segmented by drug class, distribution channel, and by region.

Which sub-segment captures the largest market size in distribution channel segment in the encephalitis drugs market?

The hospital pharmacies sub-segment under the offline segment is anticipated to hold largest market size over the forecast period and display significant growth opportunities.