The electric lunch box is a sort of lunch box, which warms up the food at a certain temperature, which results in providing the sense of freshly prepared food. Electric lunch boxes are made up of good grade materials to keep the food hot for a longer period and are non-toxic.

The modern populace especially the millennials portrays significant interest in technology which enables them to opt for effortlessly available convenient products in the market. This has encouraged the electric appliance manufacturers to get into untapped markets by renovating some of the traditional food appliances to electric appliances. An electric lunch box is one such food appliance that has been progressively gaining traction among its target customers due to its excellent features provided.

The electric lunch box market is expected to observe an attainable growth during the forecast period, i.e., 2020-2028. The market is segmented by type, application, technology, distribution channel, and region. Among the distribution channel, the online segment held the prevalent share on account of the breakthrough shift in the shopping trends of the majority of shoppers across the world. It offers ease to the customers while shopping especially in the current situation of a global pandemic and additionally, the number of suppliers online has augmented tremendously, as online podiums offer equal profit to the sellers and manufacturers globally which has picked digital platforms for generating product awareness, and consequently upturned the sales of the product. 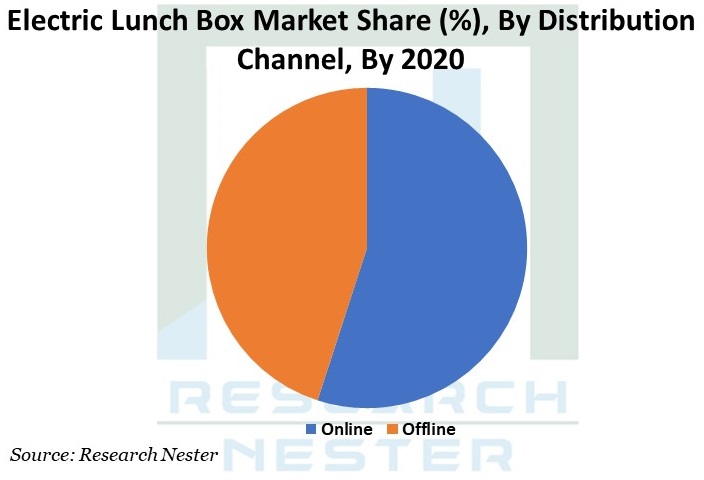 An upsurge in the consumption of home-cooked food

Consumers are inclining towards healthy home-cooked meals on account of escalating lifestyle disorders such as obesity, diabetes, PCOD among women, which majorly arises due to the consumption of junk, oily and packed food products such as chips, and others. Additionally, the rising awareness related to health and easy accessibility to such innovation-driven products such as an electric lunch box has contributed significantly towards the global electric lunch box market growth. CLICK TO DOWNLOAD SAMPLE REPORT

Convenience products such as an electric lunch box

The capability of an electric lunch box to offer warm food in an extremely portable manner is expected to draw a massive consumer base, particularly avid travelers and employees.

The convenience of cheaper substitutes

The availability of other low-cost alternatives such as insulated lunch boxes, regular steel, plastic or glassware tiffin, and microwave safe lunch boxes might impede the growth of the electric lunch box market.

The overall halt in the marketplace owing to COVID-19 is also disturbing the market of electric lunch box owing to the shutting down of factories, interruption in the supply chain, and a fall in the global economy.

Our in-depth analysis of the electric lunch box market includes the following segments:

The electric lunch box is a very convenient product, widely popular in the regions of the U.S, Canada, and Western European countries owing to a large pool of working population and awareness among individuals. North America is expected to hold the most dominant market share in the global electric lunch box market followed by Europe.

Electric lunch boxes have higher penetration in western countries' as compared to the Asia-Pacific region as the product is comparatively new to the Asian region and consumers are gaining awareness related to the benefits accompanying the electric lunch box. This attributes to the projection of Asia-pacific, anticipated to witness the fastest growth during the forecast period. Additionally, urging demand for suitable and healthy lifestyle products coupled with rising disposable income of consumers is expected to be the main element driving the market in this region. Social media also plays a major role in spreading awareness about western culture and lifestyle products.

Latin America and Middle East & Africa are expected to witness substantial growth in the electric lunch box market, owing to the rising preference of a healthy lifestyle and growing awareness regarding the same.

The electric lunch box market is further classified based on region as follows: