Ebola virus disease is a life threatening disease that results in high fever, body aches, diarrhea and internal or external bleeding. It is a rare fatal condition in humans which is transmitted from either infected animals or people. The Ebola virus damages the organs in the body, including the immune system, which eventually results in prevention of blood clotting and excessive bleeding. The disease is highly prevalent in the continent of Africa.

The Ministry of Health in Democratic Republic of the Congo reported that as of March 10, 2020, there have been a total of 3,444 cases, out of which 3,310 are confirmed and 134 are probable. This number includes 2,264 deaths, 1,169 survivors as well as the patients that are still under care. This has been labelled as the world’s second largest Ebola epidemic and was declared on August 1, 2018.

The Ebola vaccine market is anticipated to record a significantly high CAGR over the forecast period, i.e., 2020-2028. There are four types of Ebola virus strains that are known to affect humans. These consist of: Ebola virus (Zaire ebolavirus), Sudan virus (Sudan ebolavirus), Taï Forest virus (Taï Forest ebolavirus) and Bundibugyo virus (Bundibugyo ebolavirus). The market is segmented by virus type, by end user and by region. On the basis of virus type, the market is segmented into Ebola virus, Sudan virus, Taï Forest virus and Bundibugyo virus, out of which, the segment for Ebola virus is anticipated to hold the largest share in the Ebola vaccine market. The growth of this segment can be attributed to the high occurrence of Ebola virus among people as compared with the other strains of the virus.

According to the Centers for Disease Control and Prevention, the Democratic Republic of the Congo (DRC) experienced its tenth Ebola virus disease outbreak in 2019, during which a total of 3,296 cases of Ebola were reported as on November 17, 2019. Along with this, 2,196 deaths were reported as well. The World Health Organization termed this Ebola virus disease outbreak as a public health emergency of international concern on July 17, 2019.

The growing number of deaths as a result of Ebola virus disease and the need for effective treatment methods in the affected regions is anticipated to become a major growth driving factor for the Ebola vaccine market.

Increasing R&D by Companies to Boost the Market Growth

The measures being taken by various pharmaceutical companies and governments all across the world for the development of drugs and vaccines for the treatment of Ebola virus disease is another important factor estimated to result in the market growth in near future. CLICK TO DOWNLOAD SAMPLE REPORT

Despite the increasing research and development activities for Ebola vaccine development by various leading companies and the growing demand for such vaccines, the strict rules and regulations for approval of these vaccines is estimated to restrict the market growth.

Our in-depth analysis of the Ebola vaccine market includes the following segments:

On the basis of regional analysis, the Ebola vaccine market is segmented into five major regions including North America, Europe, Asia Pacific, Latin America and Middle East & Africa region. The research and development for Ebola virus disease treatment is rapidly progressing in North America, mainly in the United States. On account of this, the Ebola vaccine market in North America is predicted to hold the largest share in the market. Moreover, the market in this region is anticipated to grow at the highest rate during the forecast period as a result of growing development of vaccines and drugs in the healthcare industry along with the presence of leading pharmaceutical companies in North America. Additionally, Ebola vaccine market in Asia Pacific region is estimated to observe substantial growth on the back of rising funding by the governments, mainly in countries such as China and India. On the other hand, the Middle East and Africa region is anticipated to witness the highest demand for Ebola vaccines as the disease is majorly prevalent in the African region. 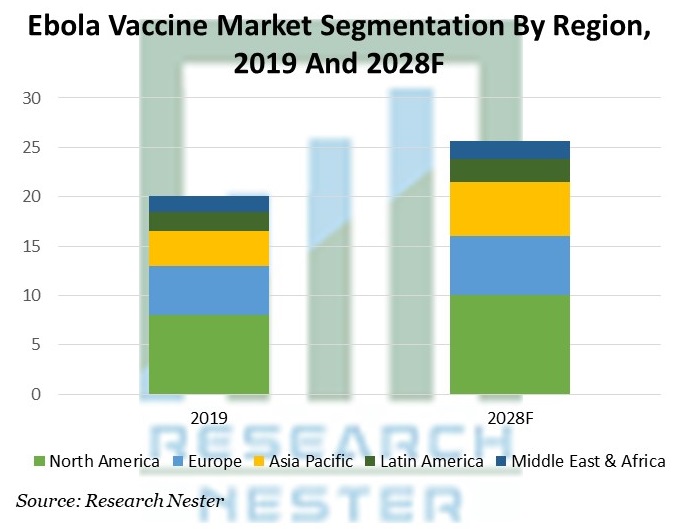 The Ebola vaccine market is further classified on the basis of region as follows:

What are the major factors driving the growth of the Ebola Vaccine market?

Growing prevalence of Ebola virus disease resulting in increased deaths is estimated to drive the market growth. Requirement for effective treatment methods, especially in the highly impacted regions is predicted to further increase the market growth.

What would be the CAGR of Ebola Vaccine market over the forecast period?

The market is anticipated to reach a significantly high CAGR during the forecast period, i.e., 2020-2028.

Which region will provide more business opportunities for growth of Ebola Vaccine market in future?

Ebola vaccine market in Asia Pacific is estimated to grow at the highest rate on the back of rising research and development activities which are further predicted to provide lucrative business opportunities.

Who are the major players dominating the Ebola Vaccine market?