Dystonia Drugs Market Segmentation by Drug Type (Torticollis, Retrocollis, Laterocollis, and Others); by Treatment (Oral Therapy, Intravenous, Surgery, and Others); and by End User (Hospitals, Clinics, and Others) – Global Demand Analysis & Opportunity Outlook 2030

The global dystonia drugs market is estimated to garner a large amount of revenue by growing at a CAGR of ~5% over the forecast period, i.e., 2022 – 2030. The growth of the market can be attributed to the growing prevalence of dystonia disorders, increasing number of incidences of musculoskeletal disorders, and rise in healthcare expenditure in developed nations. According to the World Health Organization, approximately 1.71 billion people have musculoskeletal conditions worldwide. Among musculoskeletal disorders, low back pain causes the highest burden with a prevalence of 568 million people. Apart from these, surge in demand for novel therapies for the treatment of metabolic disorders and rise in investments to improve the overall course of diagnosis and treatment of dystonia are also expected to be crucial factors driving market growth in the forthcoming years. Furthermore, escalating public awareness about the disease, and improvements in healthcare infrastructure in emerging economies are projected to offer profitable growth opportunities to the market in the near future. 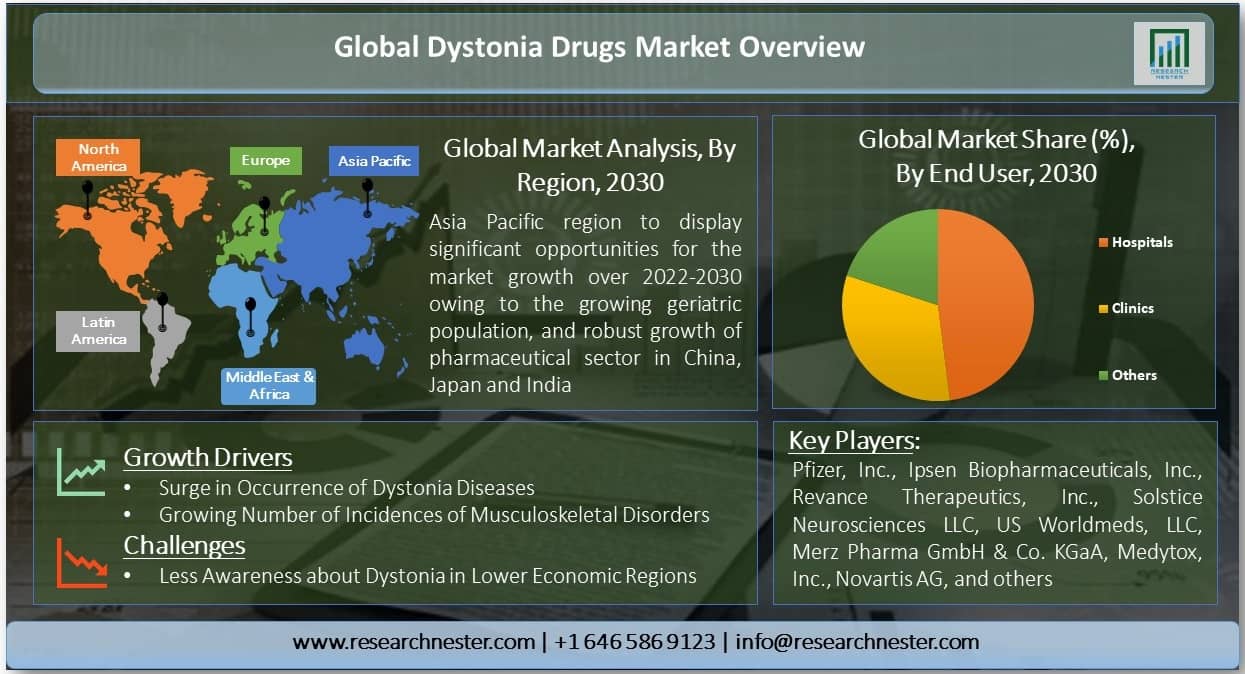 The market is segmented by treatment into oral therapy, intravenous, surgery and others, out of which, the oral therapy segment is anticipated to hold the largest share in the global dystonia drugs market on account of the fact that most of the medications for dystonia such as Valium, trihexyphenidyl and Klonopin are prescribed via oral mode of dosage, and the non-invasiveness, patient compliance and convenience of this type of drug administration. Moreover, on the basis of end user, the segment for hospitals is predicted to acquire the largest share over the forecast period, which can be credited to the high preference of patients to choose hospital facilities for treatment as a result of patient satisfaction and rising outpatient services. Larger patient admission in hospitals is also evaluated to drive growth to the market segment by the end of the year 2030.

On the basis of geographical analysis, the global dystonia drugs market is segmented into five major regions including North America, Europe, Asia Pacific, Latin America and the Middle East & Africa region. The market in the Asia Pacific is estimated to witness noteworthy growth over the forecast period on the back of the increase in the geriatric population, large patient pool, and rapid growth of pharmaceutical sector in countries such as China, Japan and India. As per another report by the WHO, the total percentage of people aged 60 or above was 9.8 percent in 2017, which is evaluated to increase up to 13.7 percent and 20.3 percent by the end of 2030 and 2050.  Additionally, the market in North America is projected to grab the largest share during the forecast period, which can be ascribed to the rising private and venture funding in the healthcare sector in the United States, and growing improvements in reimbursement policies. Along with these, strong presence of prominent medical companies is also anticipated to boost the growth of the region’s market in the coming years.

The global dystonia drugs market is further classified on the basis of region as follows:

Our in-depth analysis of the global dystonia drugs market includes the following segments:

What are the major factors driving the growth of the dystonia drugs market?

The major factors driving market growth are growing prevalence of dystonia disorders and increasing number of incidences of musculoskeletal disorders.

What would be the CAGR of dystonia drugs market over the forecast period?

What are the challenges affecting the dystonia drugs market growth?

Low awareness about dystonia in lower economic regions is estimated to hamper the market growth.

Which region will provide more business opportunities for growth of dystonia drugs market in future?

Asia Pacific will provide more business opportunities for market growth owing to the increase in the geriatric population, and large patient pool of the region.

Who are the major players dominating the dystonia drugs market?

The major players in the market are Pfizer, Inc., Ipsen Biopharmaceuticals, Inc., Revance Therapeutics, Inc., Solstice Neurosciences LLC, US Worldmeds, LLC, and others.

What are the segments in the dystonia drugs market?

The market is segmented by drug type, treatment, end user, and by region.

Which segment captures the largest market size in the treatment segment in the dystonia drugs market?

The oral therapy segment is anticipated to hold largest market size and is estimated to grow at a notable CAGR over the forecast period and display significant growth opportunities.