The global drainage catheter market is estimated to garner a revenue of ~USD 6 million by the end of 2031 by growing at a CAGR of ~8% over the forecast period, i.e., 2022 – 2031. Further, the market generated a revenue of ~USD 3 million in the year 2021. The growth of the market can primarily be attributed to the increasing number of renal disorders as well as chronic kidney diseases, worldwide. According to the data published by the International Society of Nephrology, in the year 2020, more than 850 million individuals suffer from some form of kidney diseases, which is increasing every year. 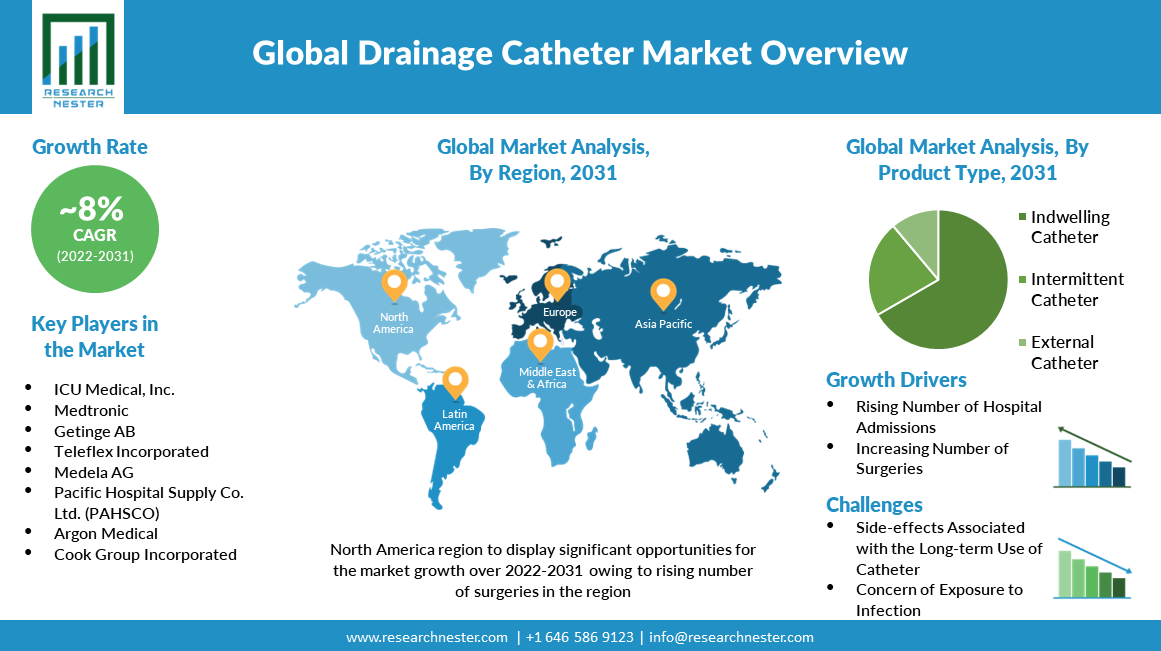 A drainage catheter is a thin tube inserted into a body cavity, skin or adipose tissue, duct, brain, or vessel inside the body to perform surgical procedures or treat any disease. Catheters are used to drain excessive fluids such as urine, mucus, blood, and pus out of the body. It is inserted to work on the targeted area. A drainage catheter is used as a primary medical assistive device in hospitals, clinics, specialized day care centers, and in-home patients. The elevated burden of chronic diseases and the upsurge in the number of surgical procedures is responsible for rising investment on healthcare infrastructures across the globe.  According to the data provided by the Centers for Medicare & Medicaid Services (CMS) of the United States government, the hospital expenditure reached USD 1270.1 billion, in the United States (U.S.) witnessing a growth of 6.4%, in the year 2020, rising from 6.3% in the year 2019.

The global drainage catheter market is segmented and analysed for demand and supply by product type into indwelling catheter, intermittent catheter, and external catheter. Amongst these, the indwelling catheter segment is anticipated to garner the largest revenue by the end of 2031, backed by the prevalence of patient admissions in hospitals, a rise in the number of surgeries, as well as a surge in operating room procedures worldwide. According to the Agency for Healthcare Research and Quality report on the Overview of Operating Room Procedures During Inpatient Stays in U.S. Hospitals, 2018, involved operating room procedures, which accounted for an aggregate of 14.4 million operating room procedures.

According to the statistics by the World Health Organization, the global per capita healthcare expenditure amounted to USD 1,064.741 in the year 2017. The worldwide healthcare expenditure per person grew from USD 864.313 in 2008 to USD 1,110.841 in 2018, where the U.S. is the top country that amounted to healthcare expenditure of USD 10, 623.85 per capita in 2018. As of 2018, the domestic general government healthcare spending in the U.S. was USD 5355.79, which grew from USD 3515.82 in 2008. These are some of the factors responsible for market growth over the past few years. Moreover, as per the projections by the Centres for Medicare & Medicaid Services (CMS), the estimated average annual percent change related to National Health Expenditures (NHE) in the U.S. was 5.2% in 2020 as compared to 2019 (4.5%). Furthermore, the National Health Expenditures are projected to reach USD 6,192.5 Billion in 2028, where the per capita expenditure is estimated to touch USD 17,611 in the same year. These are notable indicators that are anticipated to create lucrative business opportunities in upcoming years.

Region wise, the global drainage catheter market includes following major regions viz. North America followed by Latin America, Europe, Asia Pacific, Middle East & Africa. The market in North America is forecasted to hold the largest market share by the end of 2031, backed by increasing number of hospitals as well as surgeries which attributed to a positive trend for import of medical assistive devices in the region.  According to the data published in the ITC Trade Map, the import values of needles, catheters, cannulae and the like, used in medical, surgical, dental or veterinary sciences (excluding syringes, tubular metals needles and needles for sutures) was USD 5,562,266 Thousand in 2020 which was increased to USD 6,727,084 Thousand in 2021, in the United States. 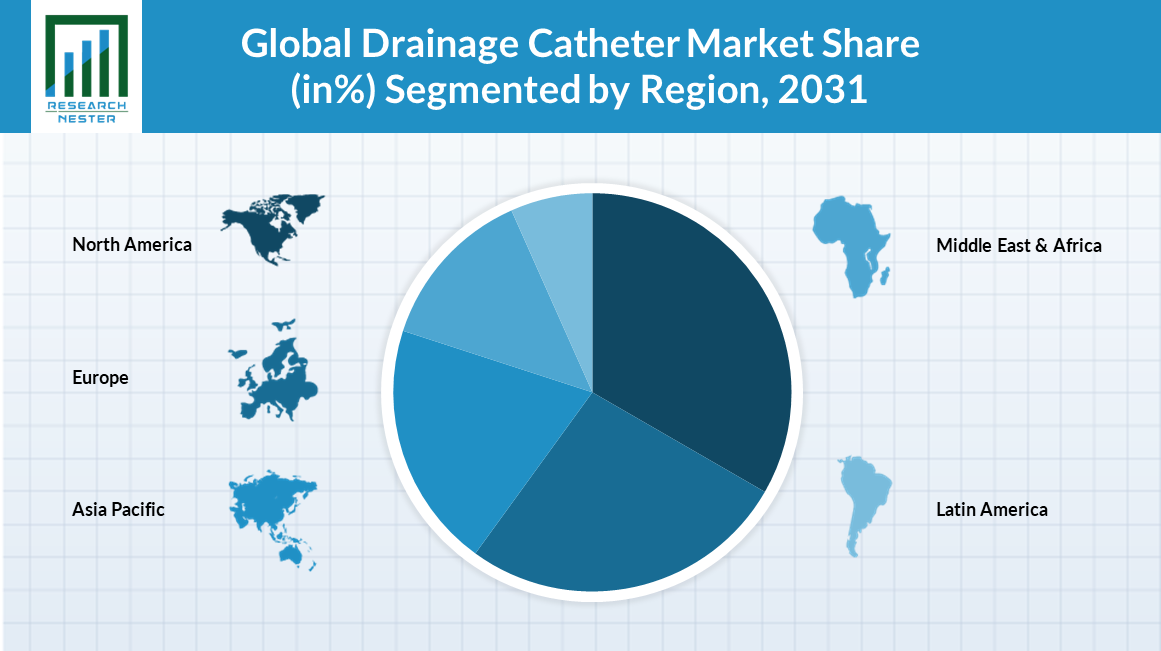 The global drainage catheter market is further classified on the basis of region as follows:

Our in-depth analysis of the global drainage catheter market includes the following segments: 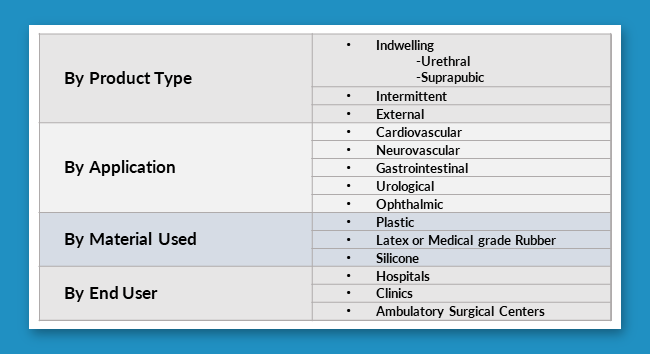 What are the major factors driving the growth of the drainage catheter market?

Upsurge in the number of hospital admissions, increasing number of surgical procedures, increasing demand of assistive devices are some of the major factors anticipated to drive the growth of the market.

What would be the CAGR of drainage catheter market over the forecast period?

What are the challenges affecting the drainage catheter market growth?

Side effects associated with long term use of catheter such as bladder spasms, stomach cramps, risk of getting infections as bacteria enters the bloodstream are estimated to hamper the market growth.

Which region will provide more business opportunities for growth of drainage catheter market in future?

Who are the major players dominating the drainage catheter market?

What are the segments in the drainage catheter market?

The market is segmented by product type, application, material used, end user, and by region.

Which segment captures the largest market size in application segment in the drainage catheter market?

The indwelling catheter segment is anticipated to garner the largest market size by the end of 2031 and display modest growth opportunities.