The digital pregnancy test market is estimated to grow with a significant CAGR during the forecast period, i.e., 2022-2030. The increasing birth rates globally, along with the growing investment in the innovation of technologically improved products are expected to fuel the growth of the market. The growth of the market can also be attributed to factors, such as, the increasing awareness among the population to control the rising birth rates and the rising middle-class population in the emerging economies on a global level. According to the data by the World Health Organization, in January 2020, approximately 0.77 million girls aged below 15 years and 12 million girls aged between 15-19 years give birth each year in the developing countries. It has been estimated that more than 10 million unintended pregnancies are registered each year among 15–19-year-old adolescent girls. Such increasing number of adolescent pregnancies has massively increased the requirement for digital pregnancy test kits and devices. Traditional pregnancy test kits, including cup test kits and strip test kits, results in symbolic results of the test such as lines or colour code format, where, there is a high chance of misinterpretation by the user. On the other hand, digital pregnancy test kits have eliminated such possibilities by providing a digital response. The advanced and improved benefits of digital pregnancy test kits over the traditional test kits have boosted the growth of the market over the forecast period. 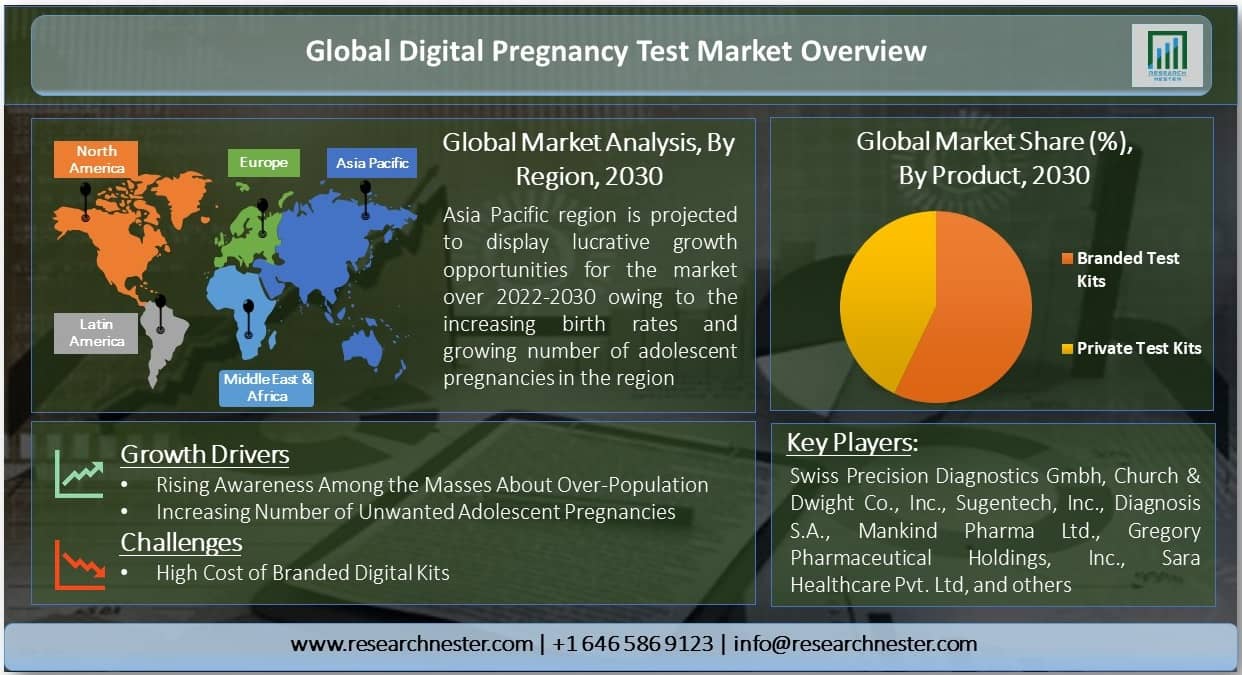 The market is segmented based on product type into branded test kits and private test kits, out of which, the branded test kits segment is anticipated to grab the largest share by the end of 2021, on account of increasing technological advancements and growing investments by the major players. Moreover, increasing government approval for digital devices globally is also projected to contribute to the growth of the segment during the forecast period. Based on sales channel, the offline segment held the largest share in the global digital pregnancy test market during the forecast period on the back of easy availability of digital test kits in medical stores, backed by the growing concerns for adolescent pregnancies in the developing and under-developed countries. CLICK TO DOWNLOAD SAMPLE REPORT

Geographically, the market is segmented into North America, Latin America, Europe, Asia Pacific and the Middle East & Africa region. The market in the Asia Pacific is predicted to grow at the highest CAGR over the forecast period owing to the increasing birth rates and the rising population in the region. Moreover, the increasing number of adolescent pregnancy rate in the region is expected to boost the market growth.  The market in the North America is anticipated to occupy the largest share in terms of revenue throughout the forecast period, owing to the growing healthcare investment, accompanied by the presence of leading digital pregnancy test kit product manufacturers. According to the report published by Centre of Disease Control and Prevention (CDC), in 2017, 0.19 million babies were born to women aged between 15-19 years in the United States. Such increasing birth rate among the young women is further expected to drive the demand for digital pregnancy test products in the region. 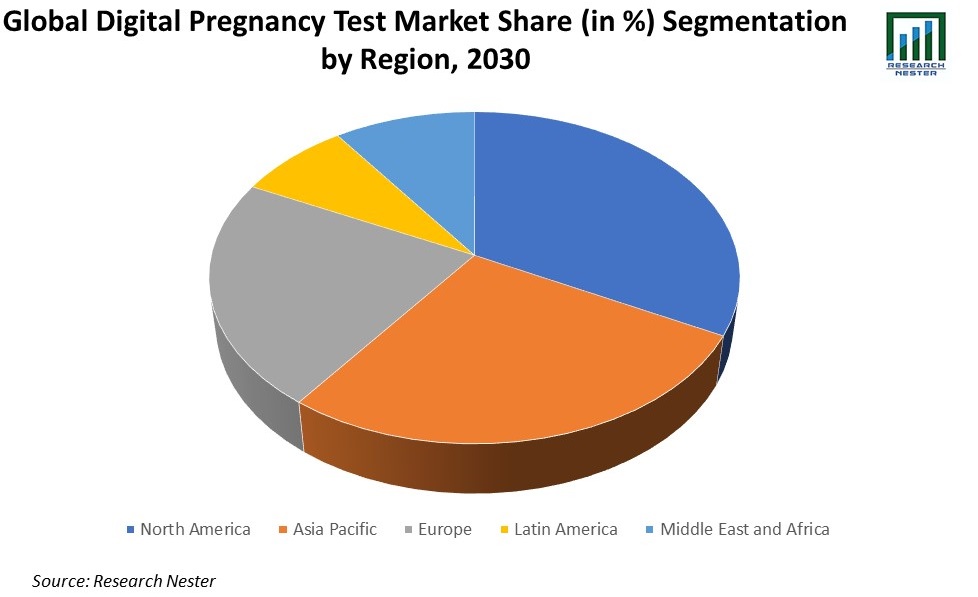 The global digital pregnancy test market is further classified on the basis of region as follows:

1) What are the major factors driving the growth of the digital pregnancy test market?

Ans: Rising awareness among the masses regarding the population explosion and increasing adolescent pregnancies are the key factors driving market growth.

2) What would be the CAGR of digital pregnancy test market over the forecast period?

Ans: The market is anticipated to attain a significant CAGR over the forecast period, i.e., 2022-2030.

3) What are the challenges affecting the digital pregnancy test market growth?

Ans: High cost of branded digital kits is one of the major factors estimated to hamper the market growth.

4) Which region will provide more business opportunities for growth of digital pregnancy test market in future?

Ans: The market in Asia Pacific region will provide ample growth opportunities during the forecast period owing to the increasing birth rates.

5) Who are the major players dominating the digital pregnancy test market?

7) What are the segments in the digital pregnancy test market?

Ans: The market is segmented by product type, usability, sales channel, and region.

8) Which segment under the sales channel segment captures the largest market size in the digital pregnancy test market?

Ans: With respect to sales channel, the offline segment is anticipated to hold the largest market share owing to the easy availability of digital pregnancy test kit products at drug stores, for the detection of pregnancy.