Diesel exhaust fluid (DEF) is referred to an aqueous urea liquid solution used in diesel vehicles which has selective catalytic reduction (SCR) technology, as a measure to reduce air pollution that is created by a diesel engine. The diesel exhaust fluid (DEF) consists of 32.5% urea and 67.5% deionized water. The SCR system intakes the DEF, which is stored in a tank inside the vehicle. A diesel engine burns the diesel to produce NOx, which is a harmful pollutant. The DEF is injected inside the SCR in small quantities and upon catalytic conversion, the NOx is reduced by ammonia present in the DEF to water (H2O) and nitrogen (N2). The chemical reactions that undergoes in the DEF SCR technology is as follows: 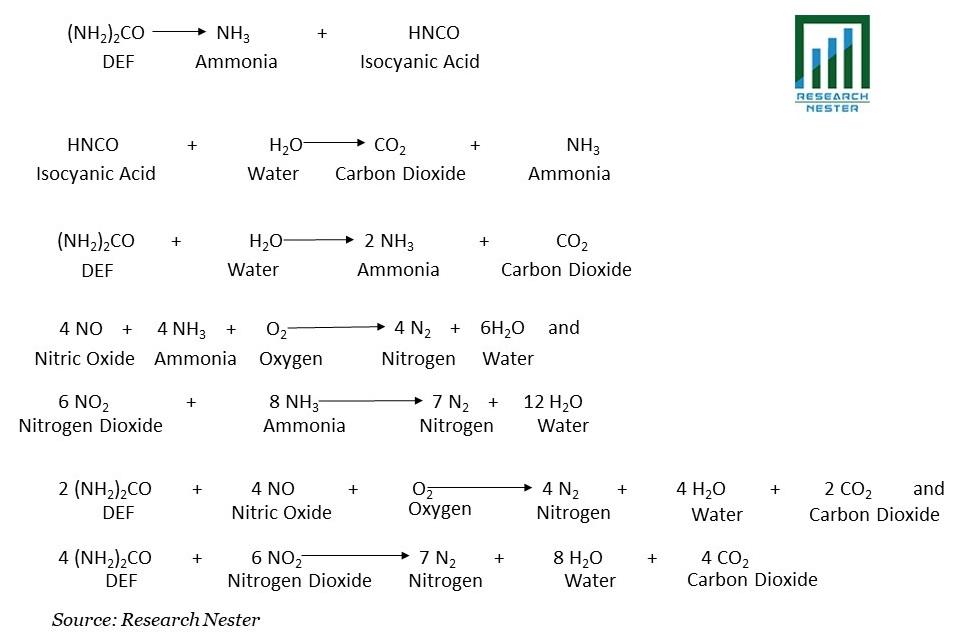 The working mechanism of a selective catalytic reduction (SCR) system is as follows: 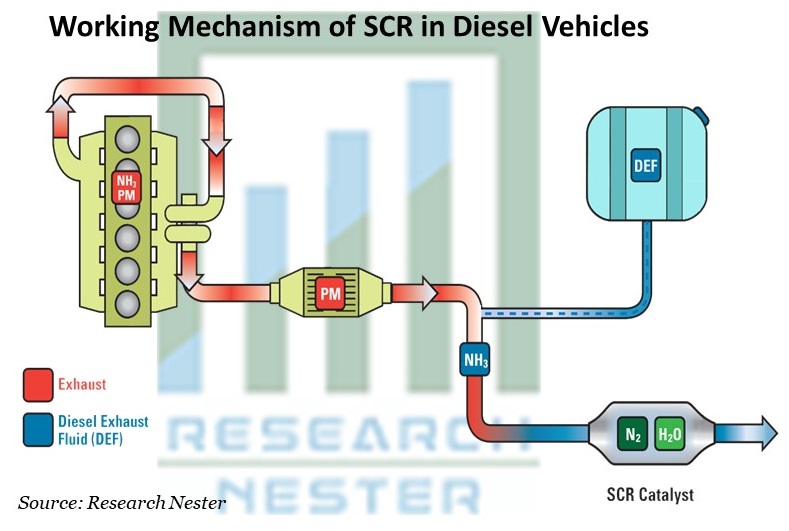 The global diesel exhaust fluid (DEF) market is thriving on the back of increasing sales of passenger and commercial vehicles around the globe, along with advancement in technologies in engine exhaust systems. Over the years, vehicle manufacturers around the globe are increasingly spending on research and development for finding out new technologies that increases the efficiency of a vehicle and emits less pollution to the environment. With the rising demand for vehicles all around the globe, the market of global diesel exhaust fluid (DEF) is thereby anticipated to grow exponentially over the years. According to the International Organization of Motor Vehicle Manufacturers (OICA), sales of vehicles around the globe increased from 65.9 million in the year 2005 to 95.1 million in the year 2018. CLICK TO DOWNLOAD SAMPLE REPORT 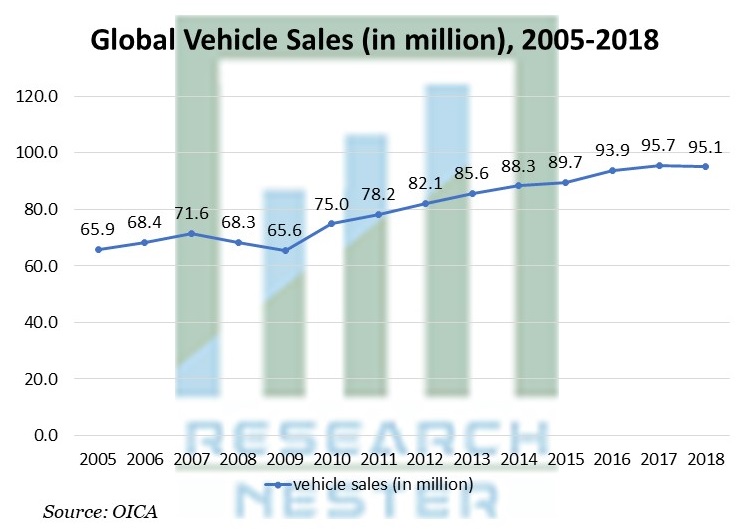 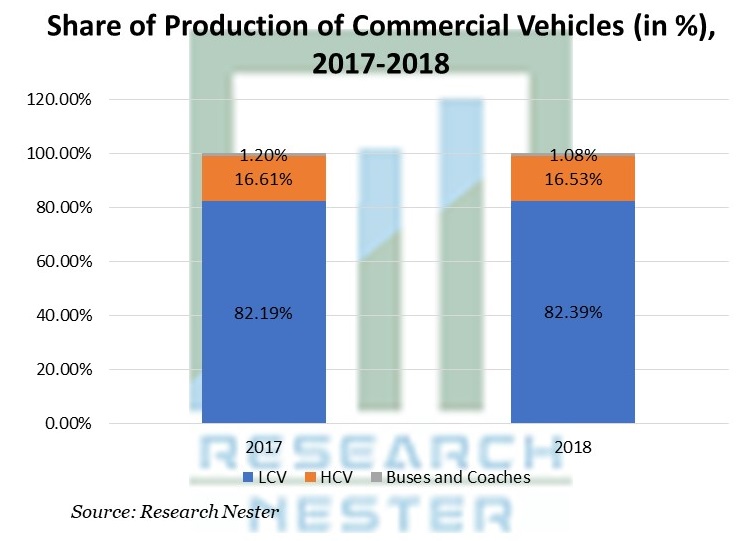 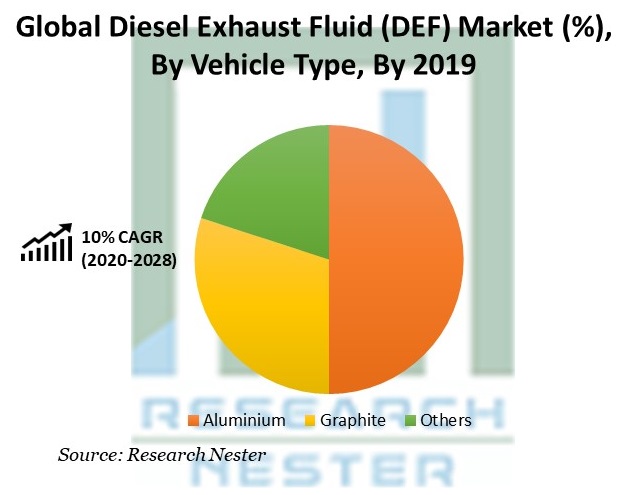 According to the World Health Organization (WHO), road transport, mostly diesel traffic, is considered to be a major contributor towards particulate air pollution. Additionally, it also estimated that in the European cities, road transport contributed to around 30% of particulate emissions, followed by 50% in OECD countries.

With the increasing vehicle fleet around the world, the concern for vehicular emissions is also increasing. As such, government of nations around the world are increasingly taking measures to curb the issue of pollution. For instance, in the European Union, stringent norms were introduced gradually to reduce NOx emissions. The Euro 3 norms which was approved in the year January 2000, had a proposed NOx emission for light commercial diesel vehicle of 0.50 g/km, which further reduced to 0.80 g/km in the proposed Euro 6d norms approve din the year January 2020. Diesel exhaust fluid helps to decrease the emissions of vehicles. Vehicle manufacturers are thereby increasingly deploying the technology to adhere to the stringent emission norms of the governments. Such a factor is anticipated to drive the growth of the global diesel exhaust fluid (DEF) market over the forecast period.

Increasing Deployment of SCR in Vehicles

To meet the emission standards around the world, vehicle manufacturers are increasingly deploying selective catalytic reduction (SCR) technology in diesel vehicles. The technology was first patented in the United States in the year 1957 and was found to be one of the most effective technology to reduce harmful emissions from the exhaust system. The technology involves the conversion of nitrogen oxides with the aid of a catalyst. As deploying the technology allows vehicles to adhere to the requirement of EPA emission regulations, it has been widely accepted amongst vehicle manufacturers till date. Such a factor is thereby anticipated to drive the growth of the global diesel exhaust fluid (DEF) market.

Rising trend of electric vehicles on the back of increasing awareness for the environment amongst the population, along with the concern for fluctuating oil prices, increasing demand for vehicles that run on alternative sources of energy and difficulties observed in processing urea are some of the factors anticipated to act as a key restraint factor towards the growth of the global diesel exhaust fluid (DEF) market.

Europe is anticipated to hold the largest market share on the back of stringent vehicle norms in the region, which will raise the demand amongst vehicle manufacturers to deploy SCR technology in the vehicles. Furthermore, rising awareness amongst individuals for DEF is also anticipated to contribute significantly towards the growth of the market in the region in the upcoming years.

The global diesel exhaust fluid (DEF) market is further classified on the basis of region as follows: