The global dibenzyl toluene (DBT) market is estimated to grow at a CAGR of ~2% over the forecast period, i.e., 2022 – 2030. The growth of the market can be attributed to the increasing application of DBT as heat transfer and dielectric fluids, and rising requirement for the efficient storage and transportation of hydrogen. Along with these, increasing usage of the chemical as an industrial solvent in a wide variety of industrial applications such as thinners, paints, lacquers and correction fluids, is also a major factor expected to drive market growth in the years to come. In 2018, toluene worth more than USD 540 million was used for the manufacture of paints and coatings in 2018, which rose up to almost USD 600 million in the years 2020. Additionally, escalating need for effective heat transfer equipment to store oil is evaluated to raise the demand for dibenzyl toluene, which in turn is projected to expand the market in the near future. 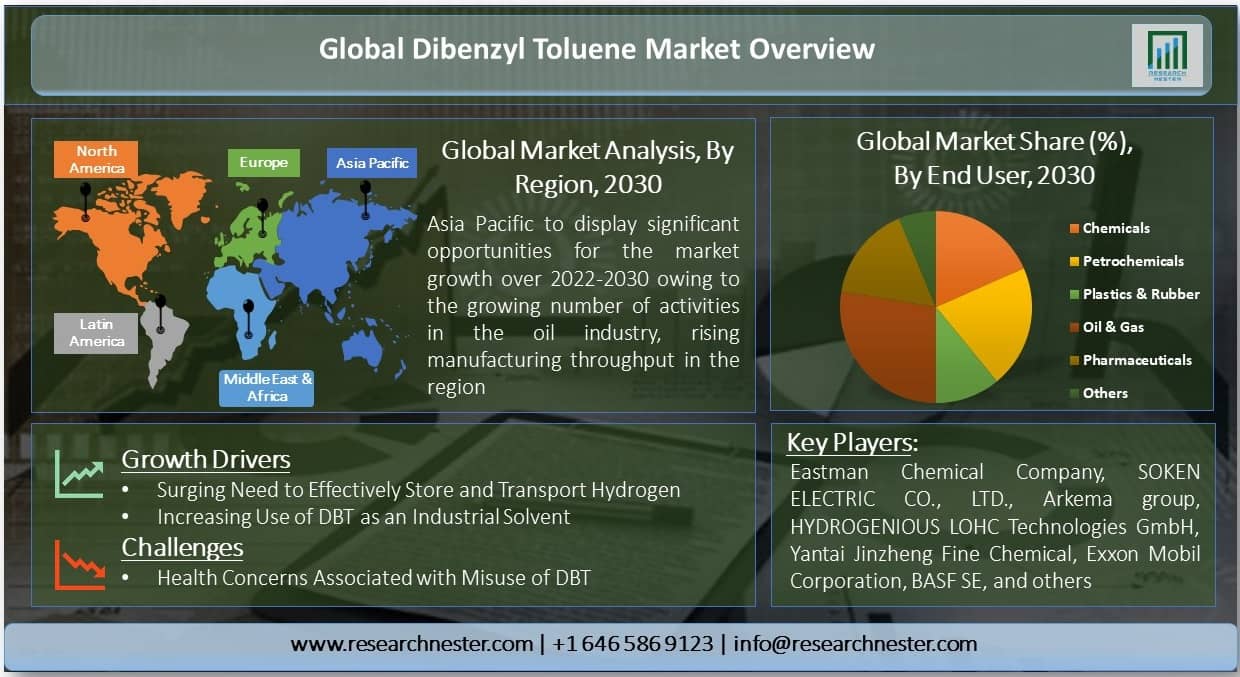 The market is segmented by end user into chemicals, petrochemicals, plastics & rubber, oil & gas, pharmaceuticals, and others, out of which, the oil & gas segment is anticipated to hold the largest share in the global dibenzyl toluene market on account of the large-scale production of dibenzyl toluene while manufacturing gasoline and other fuels from crude oil. In addition, the chemicals segment is also predicted to grab a notable share owing the high use of DBT to maintain temperatures in the chemical manufacturing facilities. Furthermore, on the basis of grade, the less than 98% segment is predicted to occupy the largest share during the forecast period ascribing to the lower price and growing application of this type of toluene in heat transfer equipment.

On the basis of geographical analysis, the global dibenzyl toluene market is segmented into five major regions including North America, Europe, Asia Pacific, Latin America and the Middle East & Africa. The market in the Asia Pacific is estimated to witness noteworthy growth over the forecast period on the back of the rising number of activities in the oil industry, growing investments of prominent market players, and increasing manufacturing output in the region. According to the International Energy Agency, the oil demand in Asia is estimated to grow by 77 percent from 2021 to 2025. Whereas, the region’s dependence on oil imports in calculated to reach 81 percent in 2025. Moreover, the market in Europe is anticipated to acquire the largest share during the forecast period, which can be credited to the rise in the number of research and development activities related to the chemicals sector, and strong presence of major market players in the region. North America is also assessed to acquire a significant share in the market by the end of 2030 owing to the rapid growth of oil and gas industry, and increasing demand for DBT from the petrochemicals industry in the United States. 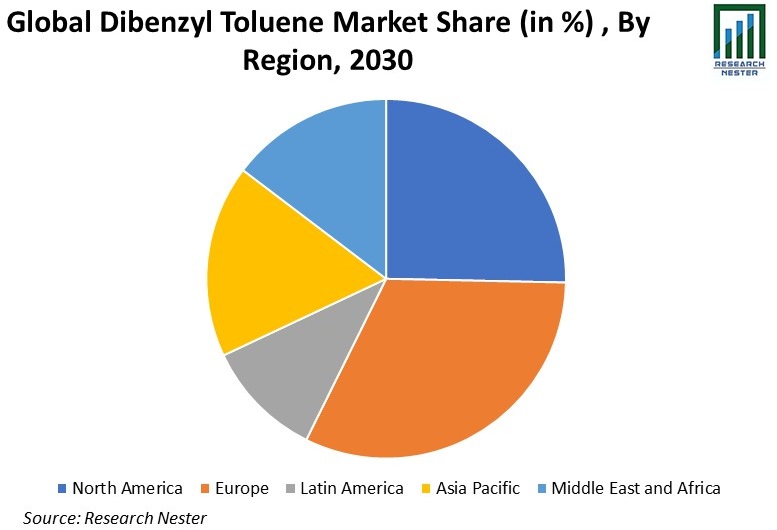 The global dibenzyl toluene market is further classified on the basis of region as follows:

Our in-depth analysis of the global dibenzyl toluene market includes the following segments:

What are the major factors driving the growth of the dibenzyl toluene market?

The major growth drivers for the market are increasing need for effective storage and transportation of hydrogen and growing usage of dibenzyl toluene as industrial solvent.

What would be the CAGR of dibenzyl toluene market over the forecast period?

What are the challenges affecting the dibenzyl toluene market growth?

Health issues associated with improper utilization of DBT is one of the major factors estimated to hamper the market growth.

Which region will provide more business opportunities for growth of dibenzyl toluene market in future?

Asia Pacific will provide more business opportunities to the market over the forecast period owing to the rising number of activities in the oil industry, and growing investments of prominent market players.

Who are the major players dominating the dibenzyl toluene market?

What are the segments in the dibenzyl toluene market?

The market is segmented by grade, application, end user, and by region.

Which segment captures the largest market size in the end user segment in the dibenzyl toluene market?

The oil & gas segment is anticipated to hold largest market size and is estimated to grow at a notable CAGR over the forecast period and display significant growth opportunities.