The global diagnostic tools and workshop equipment market is projected to grow with a CAGR of 3.7% over the forecast period, i.e., 2020-2028. The market registered a revenue of USD 39,540 million in 2019 and is further projected to cross USD 49,000 million by the end of 2028. Growing advancements in automotive technology, along with the growing popularity of electric vehicles and the rising number of product launches w.r.t vehicle diagnostic equipment and professional automotive diagnostic software, are some of the key trends that are anticipated to create opportunities for the growth of the global diagnostic tools and workshop equipment market during the forecast period.

Automotive diagnostic tools and workshop equipment are designed to capture information with the aid of an on-board diagnostic (OBD) scanning system that can diagnose different vehicle subsystems and identify faults in them. The process of diagnosis also includes the utilization of additional hardware and software components that determine the faults by connecting to the vehicle through a data logger, laptop/desktop, and other tools. These vehicle scanning tools further aid the professional vehicle mechanic with live data, which helps them to identify the flaw of the engine, battery, fuel system, transmission, or any other electronic components of the vehicle systems.

The global diagnostic tools and workshop equipment market is further anticipated to grow during the forecast period on account of the numerous opportunities generated by the emergence of next-generation vehicles, along with the growing focus of automobile manufacturers for adopting advanced OBD diagnostic tools and software. Further, the market is projected to touch USD 38059.2 million by the end of 2021.

Growth Highlights based on Region

The global diagnostic tools and workshop equipment market is segmented by regions into North America, Latin America, Europe, Asia, South East Asia, and the Middle East & Africa. Among the market in these regions, the North America diagnostic tools and workshop equipment market is projected to register the largest market share of 32.41% by the end of 2021. The growth of the market in the region can be attributed to the increasing number of on-road vehicles, growth in the sales of new vehicles, along with the implementation of innovative, high-performance, and fuel-efficient technologies. According to the statistics by the International Organization of Motor Vehicle Manufacturers (OICA), total registrations or sales of new passenger cars and commercial vehicles in North America grew from 12.1 million in 2009 to 19.5 million in 2019. Further, the increasing demand for connected vehicles in the region is anticipated to create numerous opportunities for both OEMs and workshop equipment providers. Such factors are anticipated to drive the growth of the market in North America. CLICK TO DOWNLOAD SAMPLE REPORT 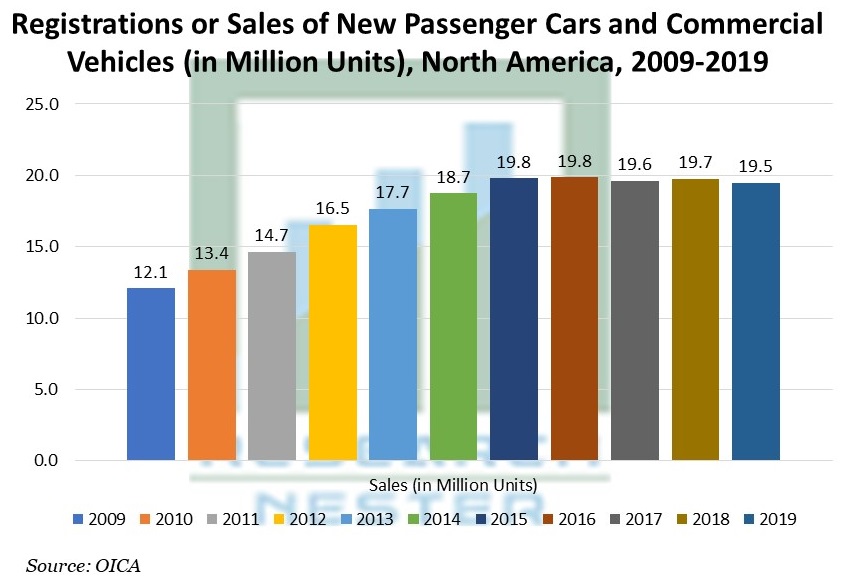 On the other hand, the market in Europe is projected to cross USD 12,000 million by the end of 2028 owing to the increasing motorization rate in the region in several countries in the region, including nations such as Luxembourg, Italy, Poland, Estonia, Slovenia, and Germany among others, along with the continuous up-gradation in emission regulations for combustion engine vehicles by the regulatory bodies. 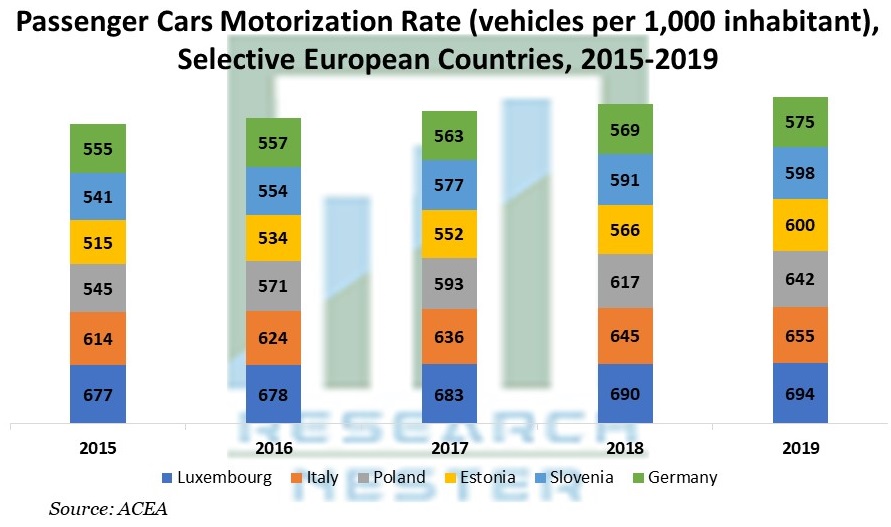 The global diagnostic tools and workshop equipment market is segmented by vehicle type into two-wheeler, three-wheeler, and four-wheeler. Amongst these segments, the four-wheeler segment recorded the largest share of 93.37% in the year 2019 and is anticipated to hold the largest share during the forecast period. The four-wheeler segment is further bifurcated into passenger cars and commercial vehicles. Out of these, the passenger cars segment is projected to hold the largest market share by the end of 2028 owing to the higher sales of passenger cars, along with the increasing advancements and adoption of advanced technologies in passenger cars. Additionally, stringent norms of the government for vehicle testing, which is raising the need amongst individuals to diagnose their vehicles frequently, is also anticipated to drive the growth of the segment in the coming years. 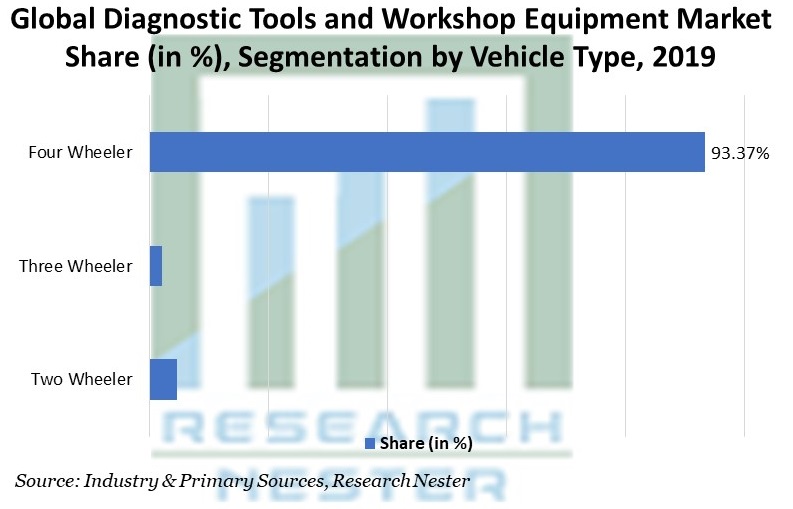 The market is further segmented by category into hand-held and station-mounted. Out of these, the hand-held segment is projected to grow with the highest CAGR of 4.1% during the forecast period. The hand-held automotive diagnostic tools include code readers, professional OBD scanners, tire pressure gauges, multi-meters, circuit testers, and others. Hand-held tools are easy to use and hence they are widely adopted by the end-users. On the other hand, the station-mounted automotive diagnostic tools include a wide range of garage equipment, such as advanced driver assistance system (ADAS) calibration, headlight testing and calibration, brake test, and others. 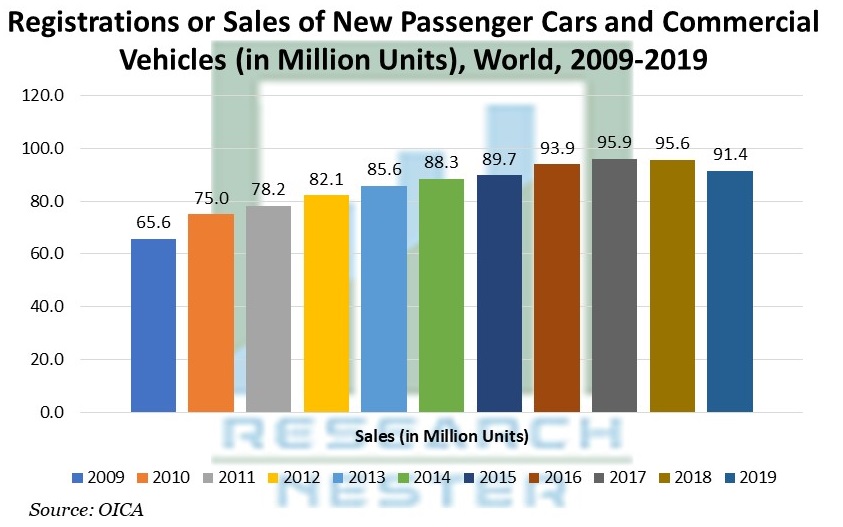 Backed by the growing sales of vehicles worldwide, there is a growing concern for reducing exhaust emissions from vehicles. As a result, there is a rising need amongst vehicle owners to frequently diagnose their vehicles, which in turn is driving the increase in the adoption of advanced diagnostic tools and workshop equipment. On the other hand, vehicle manufacturers are increasingly adopting advanced automotive technologies for better vehicle performance, which is raising the need amongst the vehicle diagnostic workshop owners to upgrade their existing diagnostic equipment. Automobile workshop equipment suppliers are also focusing on delivering modern diagnostic tools to the workshop owners, which is also anticipated to drive the market growth in the coming years. Moreover, varying emission standard norms across countries worldwide, along with the need amongst automotive manufacturers to comply with the emission regulations and standards are some of the additional factors anticipated to drive the market growth in the coming years.

The cost of equipment used for the diagnostics of automobiles has increased significantly over the years, backed by the growing use of electronic systems and model-based development in the automotive industry. Diagnostic software and tools, such as OBD2 (OBD-II) software, antilock braking system (ABS) calibration systems, electronic brake-force distribution (EBD) testing, and calibration systems, and others, along with automotive diagnostic scan tools, such as automotive paint inspection equipment, vehicle emission testing systems, and others, often cost very high and also require high assistance cost, which is further anticipated to hamper the market growth in the coming years.

The COVID-19 outbreak has had a rapid and severe impact on the global automotive industry. As governments of nations worldwide had imposed lockdowns to curb the spread of the virus, people were forced to stay indoors, and hence, the vehicles had less wear and tear as they were not in use during that period. Businesses reported huge losses throughout the year as visits to garages decreases, and for the unavailability of professional vehicle repair workers. As the economy is likely to return to normal, manufacturers in the automotive industry are expected to adapt to new strategies to enhance their business profits in the coming years and repair the loss suffered during the coronavirus outbreak.

1) What are the major factors driving the growth of the diagnostic tools and workshop equipment market?

Ans: Stringent government norms for curbing vehicular emission, along with the increasing motorization rate in several nations worldwide, are some of the major factors driving the market growth.

2) What would be the CAGR of diagnostic tools and workshop equipment market over the forecast period?

4) Which region will provide more business opportunities for growth of diagnostic tools and workshop equipment market in future?

Ans: The market in Europe is projected to display significant business opportunities in the future and cross USD 12,000 million by the end of 2028 owing to the increasing motorization rate in nations such as Luxembourg, Italy, Poland, and others.

5) Who are the major players dominating the diagnostic tools and workshop equipment market?

7) What are the segments in the diagnostic tools and workshop equipment market?

8) Which segment under vehicle type segment is projected to hold the dominating share in the diagnostic tools and workshop equipment market?

Ans: The four-wheeler segment, which is a sub-segment of the vehicle type segment, recorded the largest share of 93.37% in the year 2019, and is anticipated to hold the dominating share during the forecast period.

Ans: High cost of advanced technological equipment that are designed for automotive application is one of the major factors estimated to act as barriers to the growth of the market.