The global device-as-a-service (DaaS) market is estimated to garner a large amount of revenue and grow at a CAGR of ~37% over the forecast period, i.e., 2022 – 2030. The growth of the market can be attributed to the rising adoption of subscription-based services model, and increasing number of channel partner offering device-as-a-service. Along with these, growing need to reduce the capital expense (CAPEX) and operating expense (OPEX) among enterprises, and escalating adoption of contract-based solutions among small and medium sized-businesses are also expected to boost the drive market growth in the forthcoming years. Furthermore, rapid surge in the usage of cloud services in developing nations, and growth in the penetration of smart devices are projected to offer lucrative opportunities to the market in the near future. As of 2020, there are more than 3 billion people globally who use smartphones. By the end of 2021, this userbase is calculated to reach a value of approximately 4 billion. 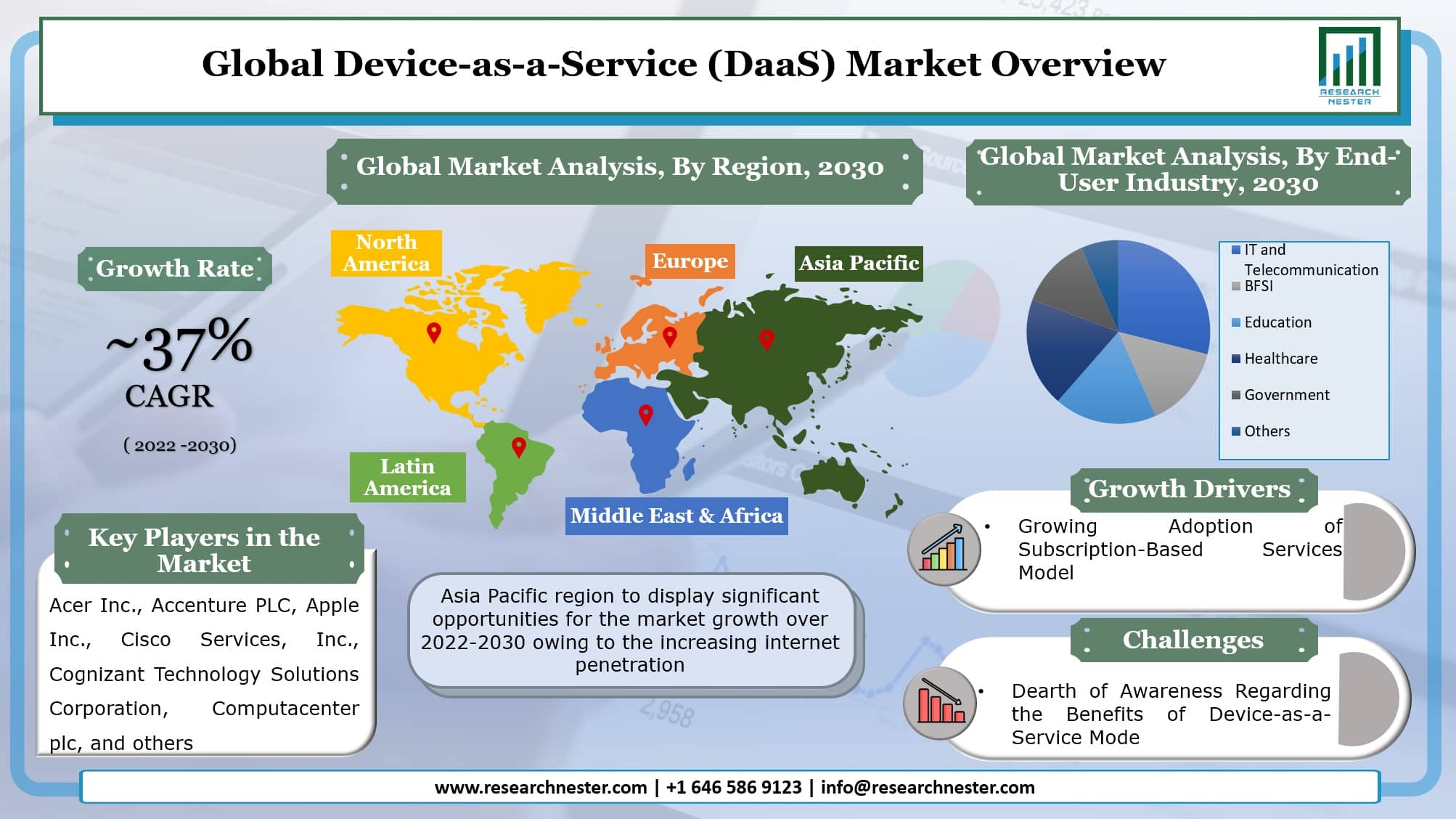 The market is segmented by end user into IT & telecommunication, BFSI, education, healthcare, government, and others, out of which, the IT & telecommunication segment is anticipated to hold the largest share in the global device-as-a-service (DaaS) market. The IT & telecommunication sector consists of cable companies, internet service providers and telecommunication companies, as a result this segment generates the highest demand for portable devices. Thus, there is a mounting requirement for software updates and related services, which in turn is predicted to drive the market segment growth in the coming years. Additionally, on the basis of device type, the desktop segment is anticipated to grab the largest share during the forecast period, which can be credited to the rising trend for IT centralization, and increase in the demand for cloud-based virtual services.

The never-ending growth in internet accessibility around the world along with numerous technological advancements comprising 5G, blockchain, cloud services, Internet of Things (IoT), and Artificial Intelligence (AI) among others have significantly boosted the economic growth in the last two decades. As of April 2021, there were more than 4.5 billion users that were actively using the internet globally. Moreover, the growth in ICT sector has significantly contributed towards GDP growth, labor productivity, and R&D spending among other transformations of economies in different nations of the globe. Furthermore, the production of goods and services in the ICT sector is also contributing to the economic growth and development. As per the statistics in the United Nations Conference on Trade and Development’s database, the ICT good exports (% of total good exports) globally grew from 10.816 in 2015 to 11.536 in 2019. In 2019, these exports in Hong Kong SAR, China amounted to 56.65%, 25.23% in East Asia & Pacific, 26.50% in China, 25.77% in Korea, Rep., 8.74% in the United States, and 35.01% in Vietnam. These are some of the important factors that are boosting the growth of the market.CLICK TO DOWNLOAD SAMPLE REPORT

On the basis of geographical analysis, the global device-as-a-service (DaaS) market is segmented into five major regions including North America, Europe, Asia Pacific, Latin America and the Middle East & Africa region. The market in the Asia Pacific is estimated to witness noteworthy growth over the forecast period on the back of the presence of large workforce involved in the IT and telecommunication industry, and large number of enterprises in the region. Along with these, increasing rate of internet penetration is also projected to bolster the region’s market growth in the future. According to the World Bank, 35.331 percent of the total population of South Asia used the internet in 2019, a massive increase up from 18.785 percent in 2018. 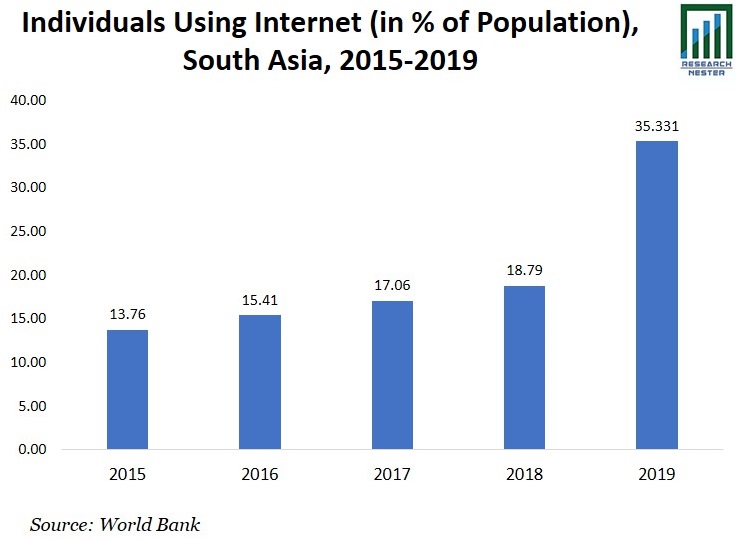 Moreover, the market in North America is assessed to acquire the largest share during the forecast period owing to the early adoption of technologies, such as IoT and cloud computing, and growing demand for mobile devices in several industry verticals in the region. 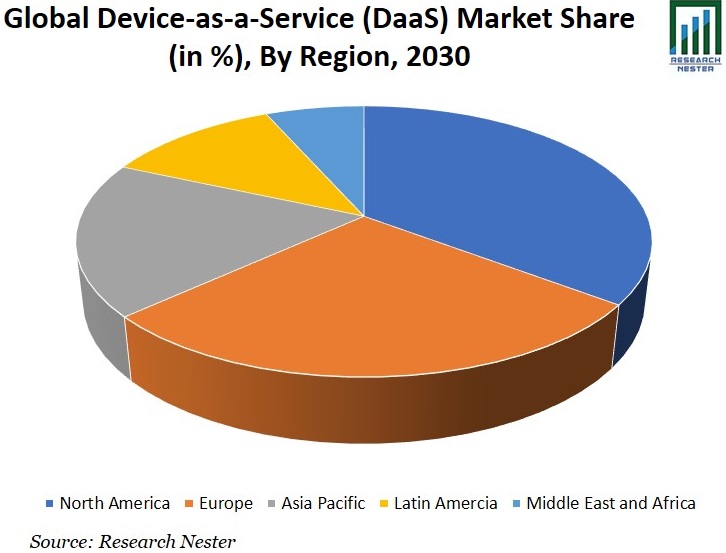 The global device-as-a-service (DaaS) market is further classified on the basis of region as follows:

Our in-depth analysis of the global device-as-a-service (DaaS) market includes the following segments:

What are the major factors driving the growth of the device-as-a-service (DaaS) market?

What would be the CAGR of device-as-a-service (DaaS) market over the forecast period?

Which region will provide more business opportunities for growth of device-as-a-service (DaaS) market in future?

Asia Pacific will provide more business opportunities for market growth ascribing to the presence of large workforce involved in the IT and telecommunication industry, and large number of enterprises in the region.

Who are the major players dominating the device-as-a-service (DaaS) market?

What are the segments in the device-as-a-service (DaaS) market?

The market is segmented by device type, offering, end user, and by region.

Which segment captures the largest market size in the device type segment in the device-as-a-service (DaaS) market?

The desktop segment is anticipated to hold largest market size and is estimated to grow at a notable CAGR over the forecast period and display significant growth opportunities.

What are the challenges affecting the device-as-a-service (DaaS) market growth?

Lack of awareness regarding the benefits of device-as-a-service mode is estimated to hamper the market growth.