The term "desktop music" describes music that has been created using a computer. From recording vocals and instruments to sequencing synths and percussion and even mixing to optimize the volume of a composition. A computer could be used to finish the entire song-creation process. Further the music which has been created could be exported to the smartphones and could also been shared with large number of audience.

Computers are now a crucial component of the creative process for musicians. It is a highly useful tool for invention, exploration, production, and publication since all genres and styles are combined. While it has drawbacks of its own and cannot replace the experience of real life, it allows artists to work in a variety of settings and has given opportunities to amateur musicians without access to professional equipment.

Further, desktop music could be also created across different operating systems, such as MS Windows, MacOS, and Linux among others. However, one doesn’t require huge budget to create desktop music. Various cheap laptops and desktop computers could also be used to carry out various musical projects.

The global desktop music market is estimated to garner a revenue of USD 16,002.8 Million by the end of 2031 by growing at a CAGR of 9.0% over the forecast period, i.e., 2022 - 2031. Further, the market generated a revenue of USD 6,845.1 Million in the year 2021. The growth of the market can be attributed to growing number of people who listen to podcast for the purpose of entertainment, knowledge, and for inspiration or motivation. There are currently approximately, 400 million podcast listeners worldwide. By the end of 2024, it is anticipated that there would be about 500 million listeners globally. Hence owing to the number of podcast listener, the consumption of audio media is growing rapidly. Additionally, podcasters are focusing more on serving the best quality audio to the listener. As a result, podcasters are extensively using digital audio workstations (DAW) to edit their digital audio recordings to remove any unpleasant gaps and create the ideal podcast, which is also expected to boost the demand for the product. 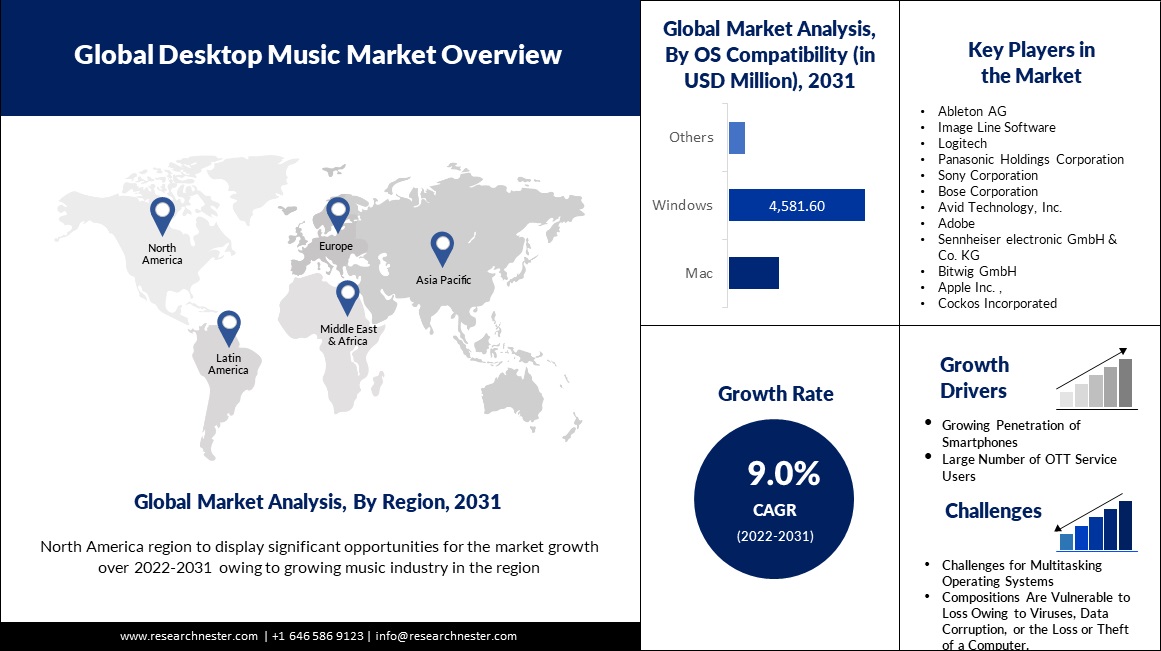 Further, there has been growing investment made by various audio streaming industry which is also estimated to boost the growth of the market. Additionally, owing to increase public interest in electronic music genres and widespread use of electronically produced songs by music producers around the world, the production of electronic music is also expanding rapidly, which is further estimated to boost the market growth. DAW has made it simple to create electronic music on desktop Along with features such as editing, it also offers virtual instruments to the musician. Hence DJs, and music composers all around the world are extensively using DAW for producing music.

Owing to the growing penetration of smartphones, there has been growth in number of people streaming music and podcast. In 2021, a poll of South Korean music consumers revealed that about 85 percent of participants listened to music most frequently on their smartphones. Furthermore, in Mexico in 2021, about 89% of those who streamed music, used a smartphone to perform the action. Additionally, approximately 80% of Americans use their smartphones to listen to podcasts. Since smartphones allow viewers to access services from anywhere, their preference for listening to music and podcasts is expanding. As a result, it is predicted that more people would consume audio media, which would drive market expansion.

About 1 billion individuals used sub-OTT services such as Netflix, Disney+, and Amazon Prime Video in 2022.

Electronic artists produced an approximate 75 percent of about USD 50 million in music NFTs that were sold in the year 2020.

Panasonic and Klipsch, a tech-driven audio company, recently announced an exclusive agreement to bring the famed "Klipsch Sound" and audiophile-quality performances to the in-vehicle experience at the CES trade show in Las Vegas.

There were about 1,500 independent musicians working full-time in the United States as of May 2019, an increase from the approximate 1,300 recorded the year before.

The global desktop music market is segmented and analyzed for demand and supply by software deployment into on-premises, and cloud. Out of which, the cloud segment is estimated to grow at the highest CAGR 11.9% over the forecast period. The growth of this segment can be attributed to rising number of cloud-based music subscriptions. It was observed that, there were about 520 million paid streaming subscribers globally at the end of 2021, up from about 440 million at the end of 2020. This also applies to family plan members who are not paying their own bills. Additionally, in order to give recordists access to large libraries of audio samples, synthesizer presets, VSTs (which, in some cases, include both synthesizers and mixing tools), partially finished works, or finished works for remixing, cloud-based music production (CBMP) services use cloud computing technologies. Hence this factor is also estimated to boost the segment growth.

The global desktop music market is also segmented and analyzed for demand and supply by OS compatibility into Mac, Windows, and others, amongst which the Windows segment is anticipated to garner the highest revenue of USD 4,581.6 Million by the end of 2031, up from a revenue of USD 1,857.6 Million in the year 2021. This growth can be attributed to the growing number of window users especially in Asia Pacific region. Microsoft is known for having amazing functionality and features, as well as a sleek and simple user interface. Further, with all popular DAWs, MS Windows offers a great user experience, and it gives user more freedom to select the gear one requires. Additionally, the growth of the segment can be attributed to growing adoption of iPhone, laptops, and smart computers. However, the Mac segment is anticipated to grow at the highest CAGR of 10.0% over the forecast period.

The North American desktop music market, amongst the market in all the other regions, is projected to hold the largest market revenue of USD 6,521.1 Million by the end of 2031, growing at a CAGR of 10.0% over the forecast period. In 2021, the market in this region generated revenue of USD 2,540.2 Million. The growth of the market in this region can be attributed to growing music industry in this region, along with growing demand for desktop recording tools. Also, it has been observed that, on a scale of 1 to 10, 93% of respondents place the music industry's reliance on live performances above seven in United States. Further, there has been growing subscription for streaming services which is also estimated to boost the growth of the market in this region. According to the most recent data, Apple Music had about 48 million monthly customers as of September 2022, making it the most popular music streaming service in the United States. Following closely behind was Spotify, which had an approximately 46 million monthly users.  This increase in demand may also be attributed to the increasing use of the internet.

1) What are the major factors driving the growth of the desktop music market?

Ans: The major factors driving the growth of the market are growing penetration of smartphones, large number of OTT service users, growing sales of electric music, and others.

2) What would be the CAGR of desktop music market over the forecast period?

3) What are the challenges affecting the desktop music market growth?

Ans: Challenges for multitasking operating systems, compositions are vulnerable to loss owing to virus, data corruption, or loss or theft of a computer, and disadvantages older composers in comparison to younger, more technologically advanced musicians are estimated to be the growth hindering factors for the market expansion.

4) Which region will provide more business opportunities for growth of desktop music market in future?

Ans: The market in the North America region is projected to hold the largest market share by the end of 2031 and provide more business opportunities in the future.

5) Who are the major players dominating the desktop music market?

7) What are the segments in the desktop music market?

Ans: The market is segmented by component, software deployment, OS compatibility, and by region.

8) Which segment captures the largest market size in the software deployment segment in the desktop music market?

Ans: The cloud segment is anticipated to garner the largest market size by the end of 2031 and display significant growth opportunities.