Military force of any country always need the advance technology to survive in any particular situation and when it comes to their operation, tactics and exercises, the necessity of mobile goods such as their food, shelter, equipment and other military application demand increases. Moreover, they need equipment which can set up easily and are suitable for military applications. Deployable Military Shelter System is an application used by the military as their temporary living, medical support center, arms and ammunition center and many others. Deployable Military Shelter is made up of technical textile and deployed in remote areas for certain period of time. These are commonly used by rescue team, medical support team, research and development team, infantry and many others. North American and European companies have the dominated market of deployable military shelter system as hangers of aircraft.

The global Deployable Military Shelter Systems market will grow significantly in 2018 and will expand at a CAGR 23.65% 2018-2027. This significant growth of the deployable military shelter market can be attributed to rising militants, medical facility, aircrafts and others. Further, development and manufacturing of advance military shelter system is expected to strengthen the growth of armor materials market. 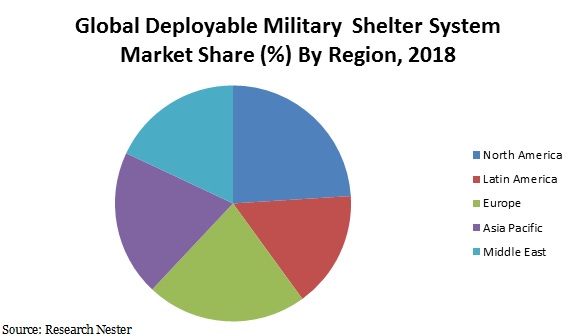 Our in-depth analysis of the market includes the following segments:

Global deployable military shelter market is further classified on the basis of region as follows:

Military shelter systems demand is directly proportional to the increase in military expenditure across the globe. Annual increase in defense budget allocation has been observed in across countries, whereas the year on year increase is very high in countries with stronger economy. Global military expenditure in 2017 was estimated at over USD 2.3 Trillion; and with growing political and military tensions in different geographies, it is projected to increase at 1.9% annually through 2027. Furthermore, a considerable share of military spending is channelized for buying various tools, equipment and systems for on the arena military support. Since, deployable shelter systems are used in field exercises, it is expected to increased military expenditure across countries will bolster the demand for deployable shelter systems.

In contrast, high cost of production is expected to limit the growth of global deployable military shelter system market during the forecast period. Further, fluctuations in the material price are likely to hamper the growth of the military shelter markets globally. Apart from this, stringent government regulations limiting the clients of manufacturers are expected to negatively impact the expansion of the armor materials market