The global dengue testing market is estimated to grow with a moderate CAGR during the forecast period, i.e., 2022-2030. The growing incidences of dengue-related infections, along with the development of low-cost and reliable testing kits, are expected to fuel the progress of this market. Along with these, there has been substantial growth in the number of researches related to the development of low-cost and reliable testing methods for dengue, which in turn is anticipated to bring a surge in the demand for these tests in the upcoming years. The growth of the market can also be attributed to factors such as the growing deployment of awareness programs for controlling the spread of dengue and the increase in extreme weather events attributed to climate change. Moreover, the climate change phenomenon and associated abnormal weather events have exacerbated the spread of dengue on a global level, owing to which it has started affecting the developed regions as well. According to the data collected from the World Health Organization, the reported number of infections caused due to dengue increased from 505,430 in 2000 to more than 2.4 million in 2010 and 5.2 million in 2019. The high burden of the disease leads to the increased need for dengue diagnostic tests, which is projected to contribute to market growth in the near future. CLICK TO DOWNLOAD SAMPLE REPORT 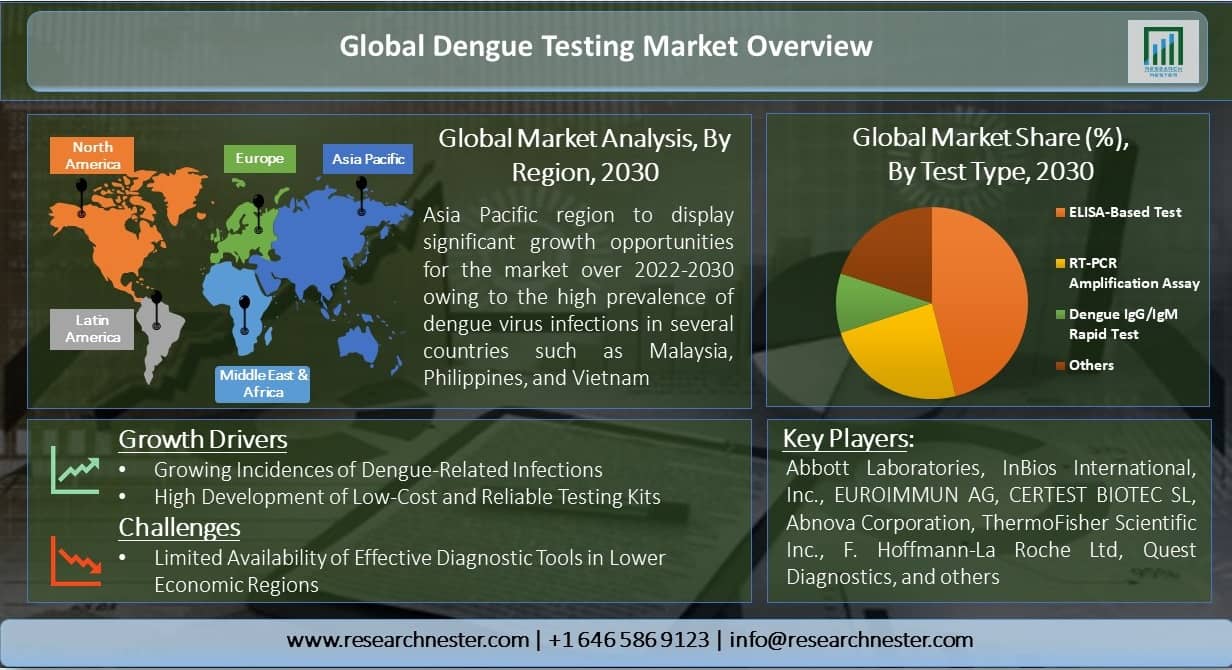 The market is segmented on the basis of test type into ELISA-based test, RT-PCR amplification assay, dengue IgG/IgM rapid test, and others, out of which the ELISA-based test segment is anticipated to grab the largest share by the end of 2030 on account of its increasing adoption by end-users for diagnosing dengue. In addition, ELISA-based tests are used for the qualitative detection of dengue virus IgM antibodies and are considered to possess greater sensitivity in detecting dengue, which is also projected to contribute to the growth of the segment during the forecast period. Furthermore, based on end-user, the diagnostic centers segment in the global dengue testing market is projected to grow with a significant CAGR over the forecast period. The growth of the segment can be attributed to the fact that most of the dengue treatments are home-based ascribing to the development of an only mild form of illness. Thus, individuals prefer diagnostic centers for dengue testing.

Geographically, the global dengue testing market is segmented into North America, Latin America, Europe, Asia Pacific, and the Middle East & Africa region. The market in the Asia Pacific is predicted to grab the largest share over the forecast period owing to the high prevalence of dengue virus infections in several countries of the region such as Malaysia, Philippines and Vietnam, and the increase in government expenditure on improving healthcare infrastructure along with growing emphasis on carrying out dengue awareness campaigns in the region. Furthermore, the market in North America is evaluated to grow significantly during the forecast period, accounting to the presence of leading market players and well-developed healthcare infrastructure in the region. Alternatively, the market in Europe is also anticipated to occupy a significant share in the market on account of growing healthcare advancements and the rising risk factors of dengue virus infections in future induced by climate change. As per the factsheet of the World Health Organization published in 2021, Europe is a potential region for the possible outbreak of dengue. A secondary dengue vector belonging to the Asian region with the name Aedes albopictus had spread to more than 25 countries in the European region as a result of international trade in used tires and other products, which are a breeding ground for the dengue mosquito. 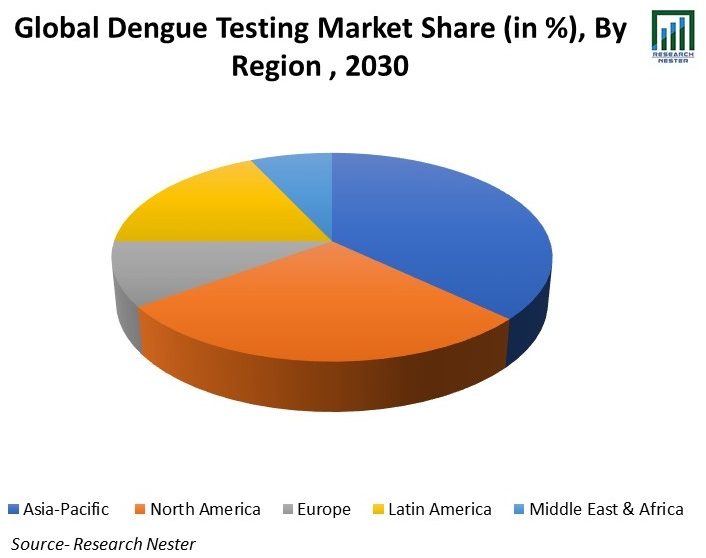 The global dengue testing market is further classified on the basis of region as follows:

Our in-depth analysis of the global dengue testing market includes the following segments:

What are the major factors driving the growth of the dengue testing market?

The growing incidences of dengue-related infections and the development of low-cost and reliable testing kits are the key factors driving market growth.

What would be the CAGR of dengue testing market over the forecast period?

The growing incidences of dengue-related infections and the development of low-cost and reliable testing kits are the key factors driving market growth.

What are the challenges affecting the dengue testing market growth?

The limited availability of effective diagnostic tools in lower economic regions and the low per capita income of population in less-developed countries are estimated to hamper market growth.

Which region will provide more business opportunities for growth of dengue testing market in future?

The market in Asia Pacific will provide ample growth opportunities owing to the high prevalence of dengue virus infections in several countries of the region.

Who are the major players dominating the dengue testing market?

What are the segments in the dengue testing market?

The market is segmented by test type, end-user, and by region.

Which segment under the end-user segment captures the largest market size in the dengue testing market?