The global delivery robot market is anticipated to exhibit a moderate CAGR during the forecast period, i.e., 2021-2029. The growth of the market can be attributed to the growing demand for autonomous robot delivery services, along with the increasing need among business organizations to lower their last-mile delivery costs. Further, growing technological advancements in robotic technologies, increasing partnerships between autonomous delivery companies and e-tailers, along with the increasing trends for grocery and food delivery robots for last-mile delivery, are some of the significant factors anticipated to drive the market growth.

Delivery robots are computer-programmed machines that are designed to carry and deliver goods. These unmanned ground vehicles (UGVs) are equipped with advanced technologies, such as LIDAR sensors, camera modules, and other artificial intelligence & machine learning aided tools, which help the delivery vehicles to work autonomously or through a human operator present at a distant location. The advanced sensors installed in these robots further provide pedestrian safety features, allowing them to traverse through sidewalks and crosswalks, thereby avoiding traffic congestions.

The global delivery robot market is thriving on account of the growing need amongst business organizations to deliver their goods faster to the end customers, especially organizations belonging to the e-commerce, retail, logistics, or restaurant & foodservice industries. These robots are designed to be smart enough to traverse through low-traffic routes avoiding traffic congestions. Further, the robots are battery-powered or are powered by hybrid energy using a mix of solar and battery-powered energy, ultimately contributing to the reduction in carbon emissions.

The market is segmented by number of wheels into three, four, six wheels, and others. Among these segments, the six wheels segment is projected to hold the largest market share by the end of 2021. The growth of the segment can be attributed to the enhanced stability features achieved by the utilization of a six-wheeled robot chassis, which otherwise is not achievable with other wheel types. Moreover, the six-wheeled robots, owing to the multi-degree-of-freedom (MDOF) wheel configuration, allows the robot to travel through bumpy roads or even un-even surfaces at high speeds. 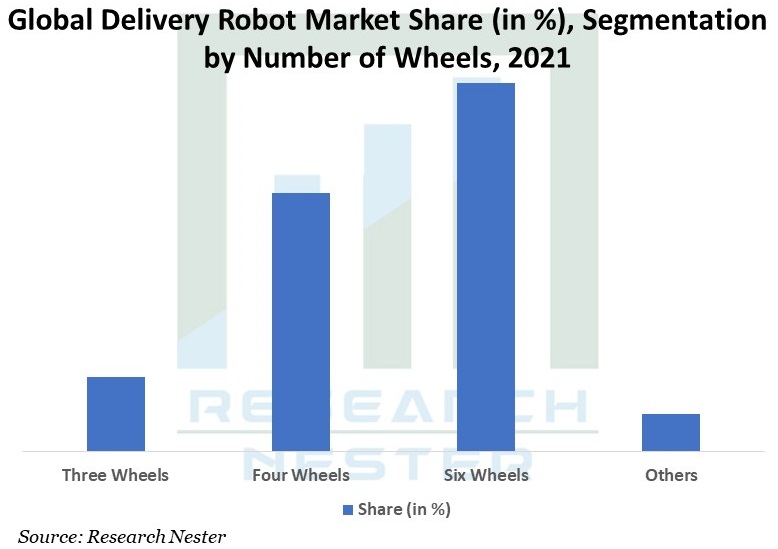 Businesses nowadays have realized the important role of customer satisfaction when it comes to the process of service delivery. Over the years, with increased customer expectations for doorstep delivery, customized window delivery slots, same-day, next-day, or instant delivery, there is a rising need amongst business organizations to focus more on their last-mile delivery processes. Further, the increasing need among businesses to lower their last-mile delivery operation costs, and the challenges observed by businesses for last-mile delivery, are raising the need for the deployment of AI-enabled last-mile delivery robots to further enrich their existing service delivery models. Additionally, with customers shifting towards the online mode of shopping, rather than visiting the conventional brick and mortar stores, along with the growing need for faster delivery of perishable goods, are further raising the need amongst businesses to deploy these robots, which is anticipated to drive the market growth in the coming years. 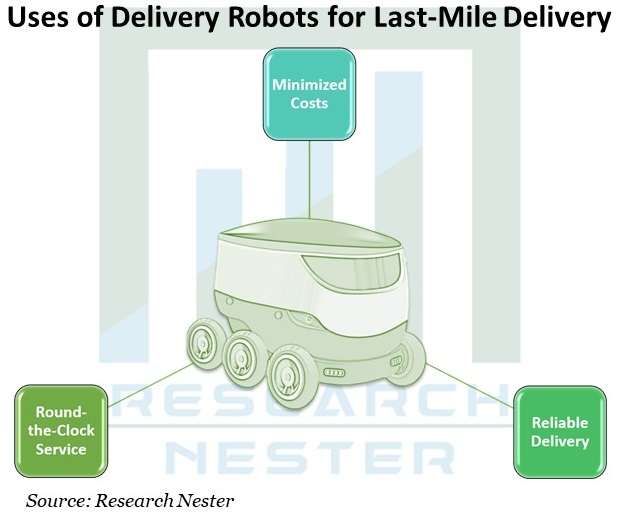 Even though the delivery robots are designed to travel through uneven roads, yet due to the lack of proper infrastructure in several developing nations around the globe, the operation of these robots becomes very challenging, which is anticipated to hamper the market growth. Moreover, the high price of these automated robots and the high initial investment costs for setting up the whole automated process are some of the additional factors anticipated to lower the market growth in the coming years.

Impact of COVID-19 on the Global Delivery Robot Market

The coronavirus pandemic has significantly raised the need among businesses as well as customers for contact-less delivery of essential goods. Restaurant & foodservice industries increasingly deployed food delivery robots to promote contact-less deliveries to their customers in several developed nations where the virus was spreading at an increasing rate. Moreover, large retail grocery chains partnered with robot manufacturers and automated delivery service providers to deliver goods to their customers as a measure to reduce the spread of the virus.

Our in-depth analysis of the global delivery robot market includes the following segments:

By Number of Wheels

On the basis of regional analysis, the global delivery robot market is segmented into five major regions including North America, Europe, Asia Pacific, Latin America, and the Middle East & Africa regions. Among the market in these regions, the market in North America is poised to hold the largest market share by the end of 2029. The growth of the market in the region can be attributed to the increasing favorable initiatives of the government for permitting the use of these robots on sidewalks and in crosswalks, along with the increasing need among business organizations to optimize their service delivery model for greater consumer satisfaction. Further, increasing deployment of these robots in Ohio, Florida, Wisconsin, Idaho, Virginia, and other states of the United States, is also anticipated to drive the market growth.

Alternatively, the market in Europe is projected to gain a significant market share by the end of 2029 on account of the growing adoption of these robots by several end-users, such as the Dominos delivery robot (DOM) for their last-mile delivery process in several cities and towns in the region, such as Milton Keynes, Dusseldorf, London, and others. Further, the presence of several key players in the region, and the increasing partnerships between autonomous delivery robot manufacturers and retail organizations to ensure effectiveness in their service delivery, such as the partnership of Co-operative Group Limited (Co-op) and Tesco plc with Starship Technologies, are some of the factors anticipated to drive the market growth in the region.

Moreover, the market in the Asia Pacific is anticipated to grow with the highest CAGR during the forecast period owing to the presence of nations, such as China, Japan, India, and others, who are leading producers of hardware components and software programs for these robots.

The global delivery robot market is further classified on the basis of region as follows:

1) What are the major factors driving the growth of the delivery robot market?

Ans: Growing need for contact-less deliveries among businesses, and the increasing deployment of food delivery robots, are some of the major factors driving the market growth.

2) What would be the CAGR of delivery robot market over the forecast period?

3) What are the challenges affecting the delivery robot market growth?

Ans: The high cost of the product and the unavailability of proper infrastructure in several nations for operating these robots, are some of the major factors estimated to act as barriers to the growth of the market.

5) Who are the major players dominating the delivery robot market?

7) Which region is anticipated to hold the dominating share in the delivery robot market?

Ans: The market in North America is anticipated to hold the largest dominating share by the end of 2029 owing to the growing adoption by businesses in the region of such robots and the supportive initiatives by the government for deploying these robots on road.

8) What are the segments in the delivery robot market?

Ans: The delivery robot market is segmented by component, load carrying capacity, number of wheels, end-user, and by region.

8) Which segment under the number of wheels segment is projected to hold the dominating share in the delivery robot market?

Ans: The six wheels segment is projected to hold the dominating share by the end of 2021 owing to the multi-degree-of-freedom (MDOF) configuration of the wheels, which allows the robot to move through un-even surfaces at higher speeds.