Database-as-a-Service (DaaS) Market Segmentation by Deployment Type (On-Premise, and Cloud-Based); by Organization Size (SMEs, Large Enterprises, and Others); and by End-User (BFSI, Healthcare, and Others) – Global Demand Analysis & Opportunity Outlook 2030

The global database-as-a-service (DaaS) market is estimated to grow at CAGR of ~18% over the forecast period, i.e., 2022 – 2030. The growth of the market can be attributed to presence of large volumes of numbers and data in almost every industry, along with the increasing demand for security for the data. Deployment of DBaas of database as a service can reduce risk of data theft and privacy breach, induce better consumer relations, and offers updates time to time. This is estimated to raise the demand for DBaas in the upcoming years. Moreover, growing technological research and innovation, and upgrades in software and services are estimated to further boost the market growth. Growing penetration of internet, installation of cloud servers, and usage of smartphones are crucial factors estimated to act as growth drivers for the market. According to the World Bank Statistics, 48.997% of the global population used internet in 2018, which is estimated to cross 58% by the end of 2021. 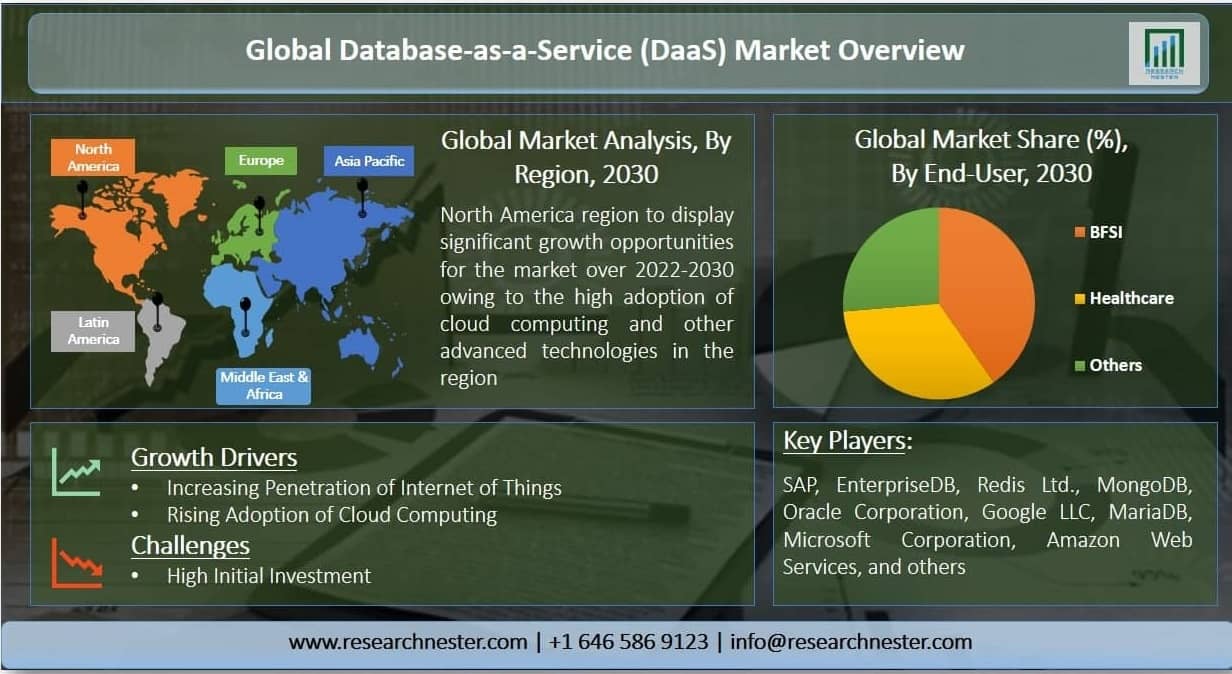 The market is divided by deployment type into on-premise, and cloud-based out of which, the cloud-based segment is anticipated to hold the largest share in the global database as a service market over the forecast period on account of increasing penetration of cloud computing and dependance on cloud-based database. Various major companies rely on cloud computing technology to access the large volumes of data, which is estimated to boost the market growth. On the basis of end-user, the market is segmented into BFSI, healthcare and others. Among these the BFSI (Banking, financial services and insurance) segment is estimated to gain notable growth over the forecast period, owing to the big numbers involved in the BFSI sector, along with increasing demand to ensure safe access of the data. CLICK TO DOWNLOAD SAMPLE REPORT

On the basis of geographical analysis, the global database-as-a-service (DaaS) market is segmented into five major regions including North America, Europe, Asia Pacific, Latin America and Middle East & Africa region. The market in North America region is estimated to witness noteworthy growth over the forecast period on the back of high adoption of cloud computing amongst the tech-savvy population of Canada and the U.S., along with presence of major market players in the region. Moreover, adoption of Artificial Intelligence (AI), Machine Learning, and IoT are estimated to boost the regional market growth.

The market in the Asia Pacific region is estimated to hold significant share and grow at the highest CAGR during the forecast period, owing to the increasing penetration of technology, such as, cloud computing and IoT, backed by technological advancement in the developing countries. 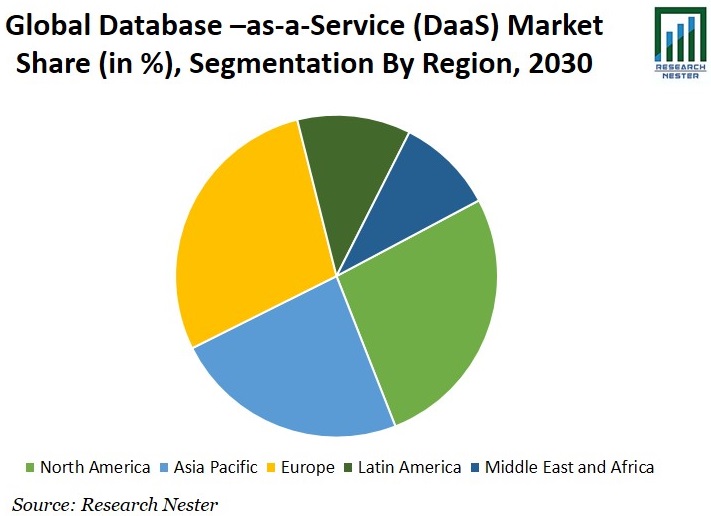 The global database-as-a-service (DaaS) market is further classified on the basis of region as follows:

Our in-depth analysis of the global database-as-a-service (DaaS) market includes the following segments:

What are the major factors driving the growth of the database-as-a-service (DaaS) market?

The presence of large volume of data in various sectors is estimated to boost the market growth.

What would be the CAGR of database-as-a-service (DaaS) market over the forecast period?

What are the challenges affecting the database-as-a-service (DaaS) market growth?

Threat with data theft and leaks, and high capital investment are estimated to hamper the market growth.

Which region will provide more business opportunities for growth of database-as-a-service (DaaS) market in future?

The market in the North America region is estimated to gain largest market share owing to the high adoption of cloud computing and other advanced technologies.

Who are the major players dominating the database-as-a-service (DaaS) market?

What are the segments in the database-as-a-service (DaaS) market?

The market is segmented by deployment type, organization size, end-user, and by region.

Which sub-segment captures the largest market size in end-user segment in the database-as-a-service (DaaS) market?

The BFSI segment is anticipated to hold largest market size over the forecast period and display significant growth opportunities owing to the involvement of big data in this sector.