Dart Charger is a charging device which is used for charging laptop and smart phones. Dart chargers are said to be the smallest and lightest charging device for laptops. Further, dart chargers contain an inline 2.1A USB port and a removable & reversible 6 feet cable. Dart chargers are also equipped with overvoltage, overheating and overcurrent protections which is making it more acceptable among consumers. However, such chargers are currently available for almost every laptop brand users. It has more than 90% conversion efficiency. Dart chargers are a perfect solution for all the problems associated with convention pc laptop chargers which are generally oversized and heavy weight. 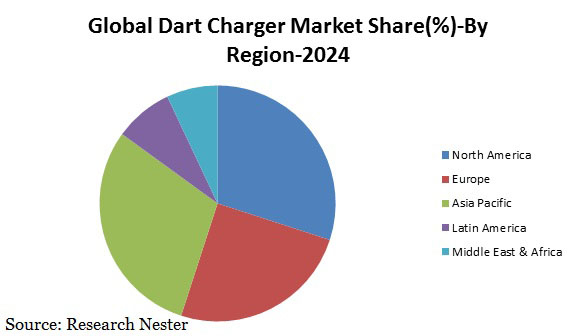 In terms of region, global dart charger market is segmented into five major regions including North America, Asia Pacific, Europe, Latin America and Middle East & Africa region. North America region is expected to be the leading market of dart chargers due to presence of FinSix Corp. in California which is the leading manufacturers of dart chargers. Moreover, High adoption rate of new technology and high disposable income of the consumers are also some major factors which are likely to fuel the growth of dart charger market in this region.CLICK TO DOWNLOAD FREE SAMPLE

Apart from this, Asia Pacific region is expected to experience huge demand for dart chargers in near future. Factors such as increasing disposable income of consumers, high population and increasing penetration of laptops, smart phones and their accessories are expected to be the key factors which are likely to propel the demand for dart chargers in this region. Furthermore, India, China and Japan are expected to be the dominating countries of Asia Pacific during the forecast period.

Additionally, Europe region is also projected to face remarkable demand for dart chargers during the forecast period due to presence of large number of pc laptops users coupled with increasing awareness towards new & advanced technology in this region.

The global dart charger market is further classified on the basis of region as follows:

Global dart charger market is further classified on the basis of region as follows:

Increasing penetration of laptops, smart phones and other technologies coupled with growing demand for their accessories are some major factors which are expected to be driving the growth of global dart charger market in near future. Dart charger is the world smallest and lightest charger of laptop and smartphones. Moreover, it is available with a number of interchangeable charging tips which are further used according to the different laptop brands. Such compatibility of dart chargers with laptops, phones and tablets is a major factor which is likely to fuel the growth of global dart charger market.

Further, increasing disposable income of the consumers growing affordability and their inclination towards advanced technology are some dynamic factors which are expected to be driving the growth of global dart charger market in near future. Additionally, dart chargers are available in different colors and their stylish look which is likely to make it more popular among consumers in near future.

The major players for dart charger market are as follows:

Key potential companies that may enter into manufacturing of dart charger are mentioned below:

The global dart charger market is segmented as follows: