The global creamed coconut market is anticipated to garner a sizeable revenue by recording a CAGR of ~7% throughout the forecast period, i.e., 2022 – 2030. The growth of the market can be attributed to factors such as the rising trend of veganism across the world, increasing number of innovations associated with creamed coconut-based products and growing product requirement in the cosmetics industry. For instance, it is evaluated that in 2018, more than 15% of the total food product lines were vegan. Approximately 2 million people in Britain alone identify themselves as vegan. In addition, escalating usage of creamed coconut for curing several diseases, including diabetes, arthritis and Alzheimer’s disease, is also expected to boost market growth in the forthcoming years. Furthermore, the demand for creamed coconut is rising as the people’s preference is shifting towards this product owing to many health benefits associated with it. The market for creamed coconut has seen a significant growth in the recent years as it is commonly used in the breakfast as a high-energy source food. 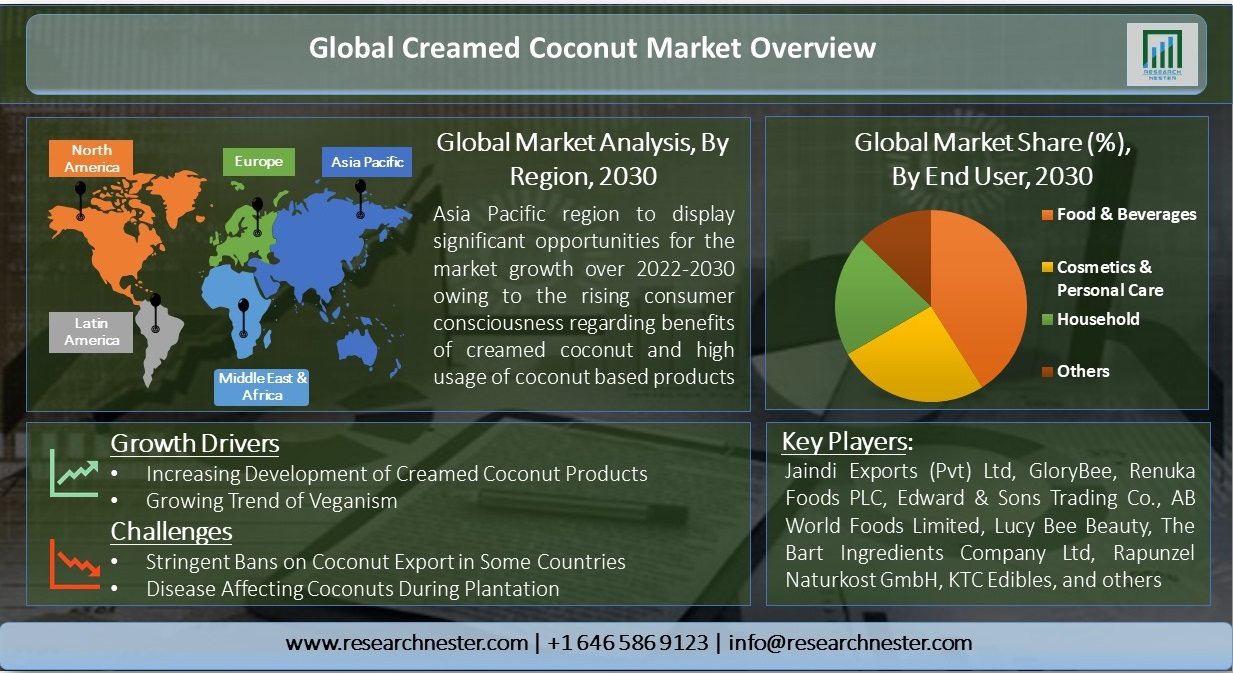 The market is segmented by end user into food & beverages, cosmetics & personal care, household, and others, out of which, the cosmetics & personal care segment is anticipated to witness huge growth owing to the rising usage of coconut-related products in the industry. Additionally, creamed coconut is considered to be an essential ingredient for the preparation of deodorant agents, hair conditioners and body lotions, which in turn is projected to increase its demand in the cosmetics industry. Furthermore, creamed coconut is biodegradable and can be used as a substitute for the chemicals as a natural agent in the personal care products. This is another factor assessed to drive growth to the market segment during the forecast period.

On the basis of regional analysis, the global creamed coconut market is segmented into five major regions including North America, Europe, Asia Pacific, Latin America and the Middle East & Africa. Asia Pacific is anticipated to witness maximum market growth over the forecast period on the back of rising awareness regarding the benefits of creamed coconut as well as the increasing use of coconut products in the region. Apart from these, the consumers in Asia Pacific are expected to prefer the use of creamed coconut more readily, which in turn is estimated to drive the growth of the market in this region. In 2019, the largest volumes of coconuts were produced in Indonesia, Philippines and India. The production in each country was valued to be 17.12, 14.75 and 14.7 million tons respectively. Similarly, the Middle East & Africa region is also expected to witness notable market growth during the forecast period owing to the high dependence of the region on agriculture and related products for the growth of its economy. 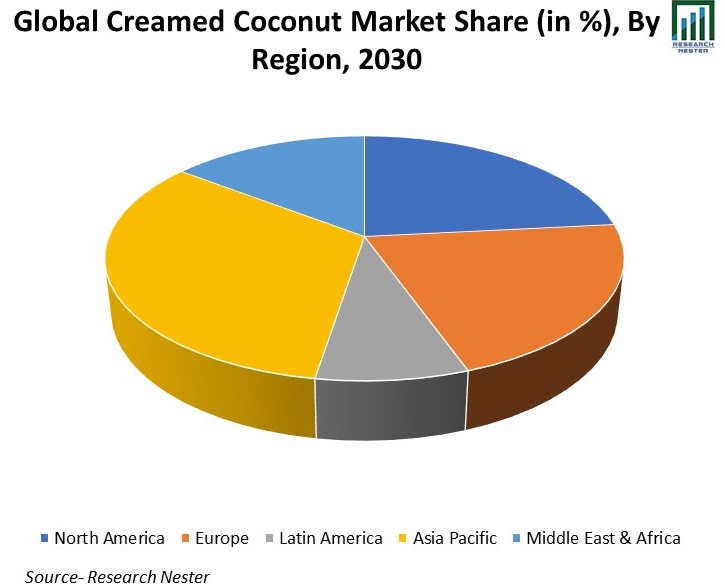 The global creamed coconut market is further classified on the basis of region as follows:

Our in-depth analysis of the creamed coconut market includes the following segments:

1) What are the major factors driving the growth of the creamed coconut market?

2) What would be the CAGR of creamed coconut market over the forecast period?

3) What are the challenges affecting the creamed coconut market growth?

Ans: Imposition of strict bans on the export of coconut in several countries and disease associated with coconut plantation are estimated to hamper the market growth.

4) Which region will provide more business opportunities for growth of creamed coconut market in future?

Ans: Asia Pacific will provide more business growth opportunities on the back of increasing awareness regarding the benefits of creamed coconut in the region.

5) Who are the major players dominating the creamed coconut market?

7) What are the segments in the creamed coconut market?

Ans: The market is segmented by distribution channel, source, end user, and by region.

8) Which segment captures the largest market size in the end user segment in the creamed coconut market?

Ans: The cosmetics & personal care segment is anticipated to hold largest market size and is estimated to grow at a notable CAGR over the forecast period and display significant growth opportunities.