The global counter IED market is anticipated to garner a large revenue by recording a CAGR of ~2.5% throughout the forecast period, i.e., 2022-2030. The key drivers behind the growth of the market are internal and external security threats, technological innovations, modernization initiatives and territorial innovations for detection of improvised explosive devices (IEDs). Some other major forces which are expected to boost the market growth in the coming years are allocation of military expenditure for the equipment which help to combat the threat from IEDs and increasing attacks of improvised explosive devices. According to a report by the United Nations, in the recent years more than 4300 improvised explosive devices events have resulted to an evaluated 65,400 casualties. In the last decade, more than 360 humanitarian workers have been injured by IEDs. Moreover, IEDs are relatively cheaper as they are made of the materials which are commonly available. These devices are predicted to be heavily used in future encounters, which in turn is expected to raise the government expenditure on counter IED systems. This in turn is estimated to expand the market in the upcoming years. 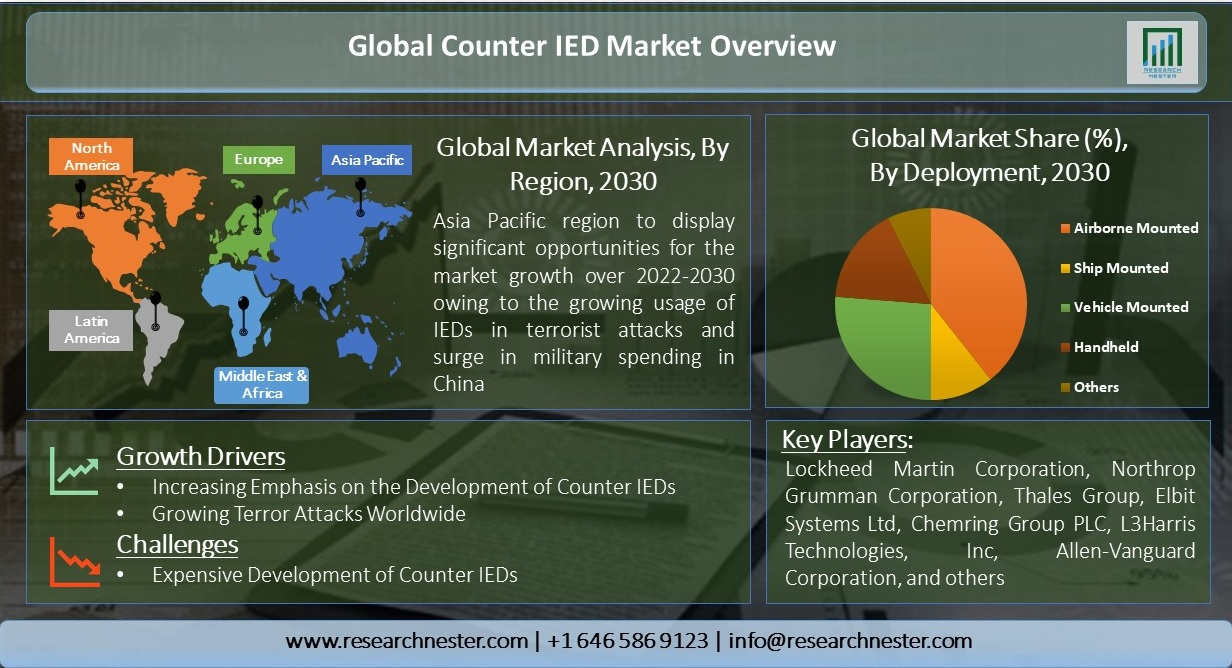 The market is segmented by deployment into airborne mounted, ship mounted, vehicle mounted, handheld and others, out of which, the airborne mounted segment is anticipated to grow at the highest CAGR on the back of rising use of airborne platforms by militaries of different countries in order to detect improvised explosive devices which are planted underground. Furthermore, the growth of this segment is also assessed to increase over the forecast period as these platforms are added with several types of payload and sensors to detect IEDs at different ranges. Additionally, on the basis of end users, the military segment is projected to occupy the largest market share during the forecast period owing to the increasing usage of counter IED equipment by military to tackle with the threats posed to public and private properties.

On the basis of regional analysis, the global counter IED market is segmented into five major regions including North America, Europe, Asia Pacific, Latin America and the Middle East & Africa. North America is anticipated to hold the largest market share on the back of presence of nations such as the United States where the threats from IEDs has been continuously increasing. This is also expected to lead to the country invest millions of dollars in order to combat these threats. Moreover, Asia Pacific is anticipated to lead the market in terms of share in the future owing to the rising usage of improvised explosive devices in terror attacks and increasing defense spending in the region. For instance, China’s military spending increased from 2018 to 2019 by almost USD 8 billion. The calculated value amounted to be more than USD 260 billion in 2019.  In addition, the growing emphasis of China to become a major trade hub in the world is also evaluated to drive market growth in APAC by the end of 2030. 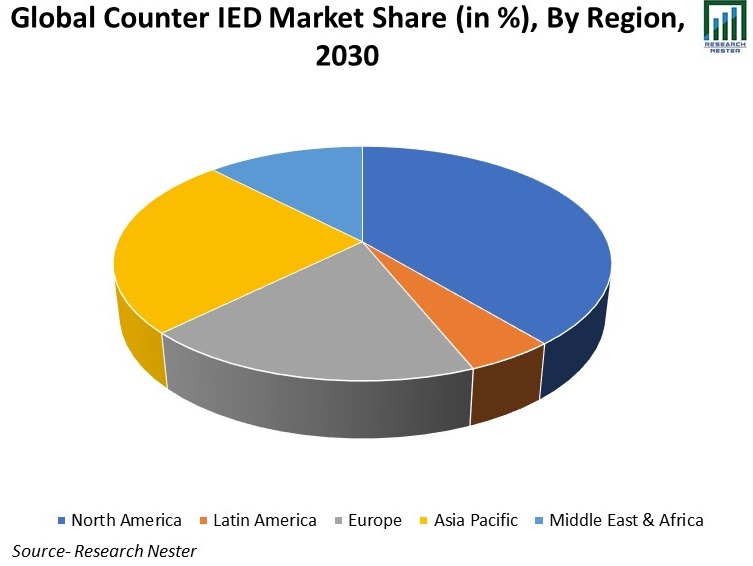 The counter IED market is further classified on the basis of region as follows:

Our in-depth analysis of the counter IED market includes the following segments:

What are the major factors driving the growth of the counter IED market?

The major growth drivers for the market are rising focus on the developments of counter-IEDS and increasing incidences of terror attacks all across the world.

What would be the CAGR of counter IED market over the forecast period?

What are the challenges affecting the counter IED market growth?

Limited access to counter-IED technologies and high cost associated with product development are estimated to hamper the market growth.

Which region will provide more business opportunities for growth of counter IED market in future?

Asia Pacific will provide more business opportunities to the market owing to the rising usage of improvised explosive devices in terror attacks and increasing defense spending.

Who are the major players dominating the counter IED market?

What are the segments in the counter IED market?

The market is segmented by deployment, capability, end users, and by region.

Which segment captures the largest market size in the end users segment in the counter IED market?

The military segment is anticipated to hold largest market size and is estimated to grow at a notable CAGR over the forecast period and display significant growth opportunities.