The sensors fitted to the CGM machine are placed into the body of a diabetic patient which measure the glucose concentrations in the interstitial fluid. It is a minimally invasive technique for measuring blood glucose concentration where a reusable transmitter is connected to the sense wire which transmits real time readings wirelessly to a receiver. The continuous glucose monitoring along with a compatible smart device can be used as a display unit. An alert system can be activated in the compatible smart devices which can be used to alert user when a particular threshold of glucose level is reached.

The CGM market is observing robust growth on account of increasing cases of diabetes and high adoption rate of advanced diabetic care devices. Increase in obese population around the world is one of the major factor that is expected to boost the market growth. Rising technological innovations coupled with higher investments in research and developments with high rate of adoption of minimally invasive techniques are some of the factors that are driving the market. Worldwide increase in the geriatric population is also an important factor that is estimated to boost the global continuous glucose monitoring market.

Continuous glucose monitoring market is anticipated to record a CAGR of 15.2% over the forecast period i.e. 2019-2027. The market is segmented into integrated insulin pumps, transmitters & receivers and sensors, out of which sensors are estimated to have the highest market share in the overall market of continuous glucose monitoring during the forecast period. Apart from that, rising diabetic population is the most important factor which is driving the growth of the market.CLICK TO DOWNLOAD FREE SAMPLE 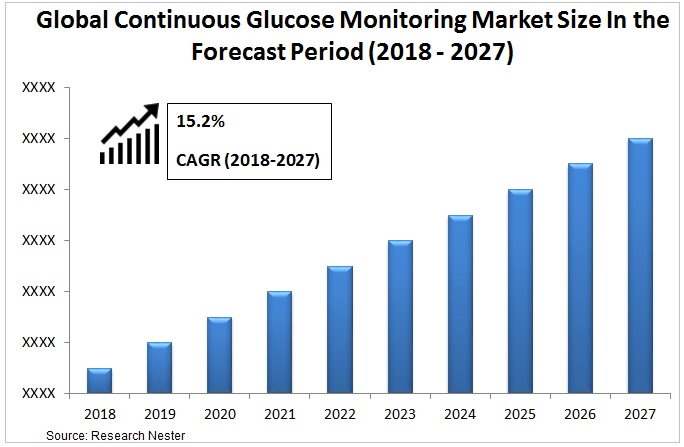 The rise in the diabetic population across the globe has led to the increased use of advanced glucose monitoring methods such as CGM. For a diabetic patient, it is mandatory to monitor and track the blood glucose concentration on continuous basis so as to reduce the chance of any health related negative complications. According to the World Health Organization (WHO), the prevalence of diabetes worldwide among adults who are above 18 years of age has increased from about 4.7 percent in the year 1980 to 8.5 percent in the year 2014. In the year 2016, approximately 1.6 million deaths were directly related to diabetes. About 2.2 million deaths were directly related to high blood glucose. This increased prevalence of diabetes and deaths associated with it across the globe has led to the adoption of continuous glucose monitoring which is further anticipated to enhance the growth of the market over the forecast period.

Increase in the Geriatric Population

The worldwide increase in the geriatric population is directly associated with the increase in the diabetic population. It is majorly contributed to the hormonal changes and impaired glucose regulation that takes place as a person gets old over the years. Aged population that is suffering from diabetes requires CGM to track their sugar levels and to maintain their health.  According to the National Institute of Health (NIH), older population around the world is anticipated to increase in an unprecedented manner. Globally, 8.5% of the total world population (617 million) are aged 65 and above. According to the latest report, this percentage is anticipated to rise with approximately 17% of the total worldwide population by the year 2050 (1.6 billion) which is further estimated to escalate the prevalence of diabetes. These factors are anticipated to augment the growth of the global continuous glucose monitoring market over the forecast period.

Results of continuous glucose monitoring are sometimes inaccurate which might result in medical health complications. This drawback is expected to restrain the growth of the market over the forecast period.

North America is anticipated to have the largest share in the market on account of growing technological advancements, rising geriatric population, rising awareness and increased prevalence of diabetes in that region. Increased funding by the government for research and development and growth in the healthcare sector is anticipated to propel the growth of the market over the forecast period.

Europe region is expected to hold the second position in terms of market share on the back of rising geriatric and diabetic population along with increase in investment in the healthcare sector. These are some of the important factors which are anticipated to augment the growth of the Europe market in upcoming years.

Global continuous glucose monitoring market is further classified on the basis of region as follows: