Aircraft wing is referred to a type of wing that produce lifts. Wings have streamlined cross sections that are subjected to aerodynamic forces. Wings are the basic component of an aircraft to fly. The shape and design of aircraft wings play an important role in defining aircraft operations. The shape and design is required to generate the proper lift and streamline flow while reducing the drag and weight acting on the aircraft.

On the basis of aircraft type, the global commercial aircraft wing market is segmented into narrow body, wide body and regional jet. Further, narrow body dominates the overall market in 2016 and is believed to continue its dominance over the forecast period. Moreover, narrow body segment is projected to post the CAGR of 7.1% by the end of 2024. 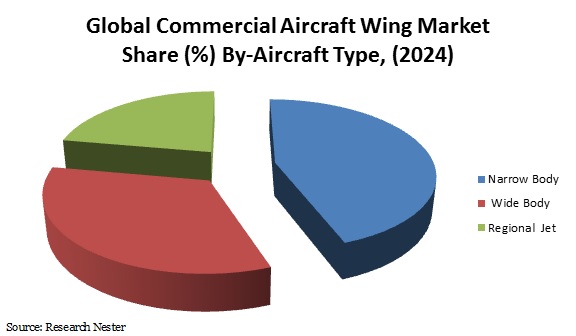 Global commercial aircraft wing market is further classified on the basis of region as follows:

However, volatility in the price of raw material is expected to hinder the growth of commercial aircraft wing market over the forecast period.

The major key players for commercial aircraft wing are as follows

The global commercial aircraft wing market is segmented as follows: