The global CMOS image sensor market is estimated to garner a revenue of USD 39,544.3 Million by the end of 2031 by growing at a CAGR of 6.32% over the forecast period, i.e., 2022 - 2031. Further, the market generated a revenue of USD 15,752.4 Million in the year 2018. The growth of the market can be attributed to the rising demand for high-definition image-capturing devices worldwide. For instance, in June 2019, Sony Corporation revealed the IMX415 type 1/2.8 4K CMOS image sensor and the IMX485 type 1/1.2 4K-resolution back-illuminated CMOS image sensor. In order to meet the constantly expanding need for security cameras in a variety of monitoring applications, such as anti-theft, disaster warning, and traffic monitoring systems or commercial complexes, Sony developed these two security camera sensors. 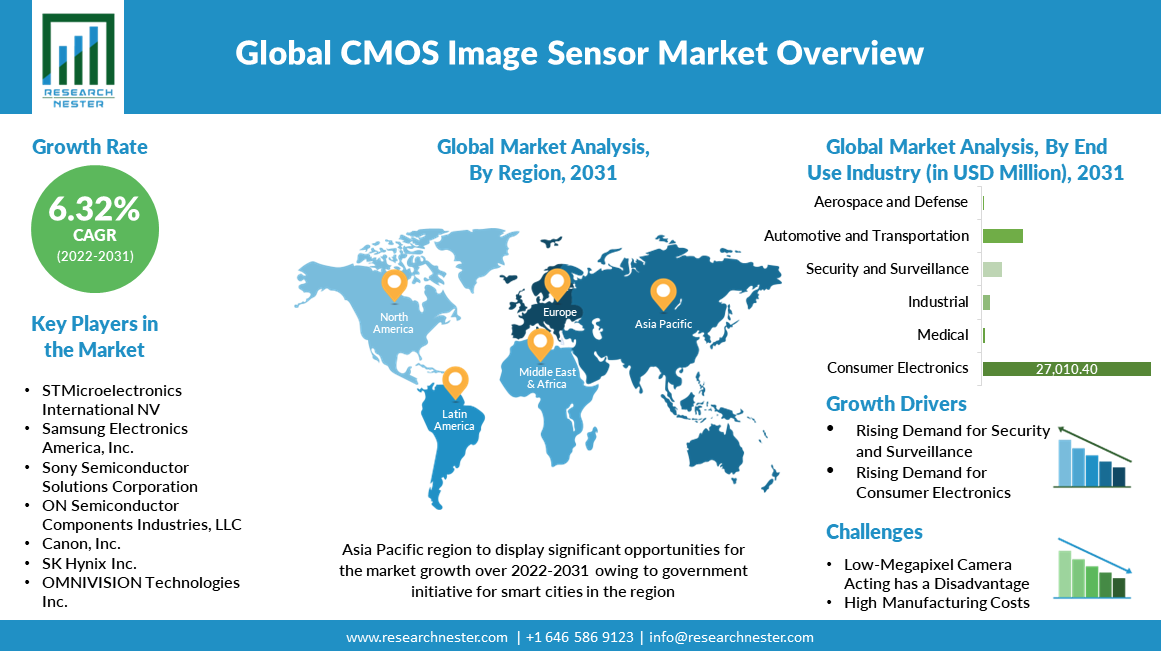 There is growing adoption of CMOS technology owing to its faster shutter speed beside maintaining good quality of image. Healthcare care industry has shown greater adoption of CMOS technology. This technology is extensively used for surgical procedure. Such factorsare therefore anticipated to drive the growth of the market over the forecast period. According to the data collected by National Library of Medicine from 192 WHO member approximately 234.2 million major surgery procedures are performed annually in the world.

Security is a major concern for people owing to the increasing thefts and attacks. This is expected to drive the market growth. However, owing to the privacy concern they can’t be installed everywhere. Hence many organizations are coming up with an upgraded solution. For Instance, Canon unveiled a new outdoor 4K camera in December 2021 that can be used as both a regular camera and a security camera. It can also merge every 4K UHD pixel the 4K UHD CMOS image sensor has ever recorded.

Spending on home electronics and appliances in China has increased significantly and is expected to keep rising. In 2021, it was estimated to be around 230 million dollars.

Middle East, Africa, and South Asia accounted for 95% of global death owing to terrorist attacks in 2019.

It is estimated that an approximately 14 million people in America undergo some sort of surgery every year.

The global CMOS image sensor market is segmented and analysed for demand and supply by end use industry into consumer electronics, medical, industrial, security & surveillance, automotive & transportation, and aerospace & defence. Amongst these segments, the automotive & transportation segment is anticipated to hold the revenue of USD 6,646.7 Million by the end of 2031, by growing at the highest CAGR of 8.34% during the forecast period. Further, in the year 2018 the segment garnereda revenue of USD 2,053.5 Million. Rising application in emerging vehicles is expected to attributed to the growth of the market. Sony has unveiled a CMOS image sensor for automotive cameras that has 5.4 effective megapixels, the highest number in the industry, and one that allows for simultaneous HDR shooting and LED flicker reduction.On the other hand, the consumer electronics segment is projected to garner the largest revenue of USD 27010.4 Million by the end of 2031.

Regionally, the global CMOS image sensor market is studied into five major regions including North America, Europe, Asia Pacific, Latin America and Middle East & Africa region. Amongst these markets, the market in Asia Pacific is projected to hold the largest market revenue of USD 17,759.3 Million by the end of 2031, up from a revenue of USD 6,501.0 Million in the year 2018. The market is expected to grow at a CAGR of 7.01% during the forecast period. Growing preference for facial recognition systems is anticipated to boost the market growth. Also government initiatives for smart cities is expected to drive the growth over the forecast period. As part of the Internet of Things (IoT) Management Framework for Smart Cities, the Ministry of Electronics and Information Technology in India has tasked ERNET India and IISc with creating the LoRa gateway (pole gateway), a low-cost compute device that can connect to cameras, temperature, humidity, air quality, and other sensors.

What are the major factors driving the growth of the cmos image sensor market?

What would be the CAGR of cmos image sensor market over the forecast period?

What are the challenges affecting the cmos image sensor market growth?

Low-megapixel camera acting as a disadvantage, high manufacturing costs, and CMOS image sensor (CIS) proves to be challenging are some of the major factors expected to hinder the growth of the market.

Which region will provide more business opportunities for growth of cmos image sensor market in future?

The market in Asia pacific is projected to hold the largest market share by the end of 2031 and provide more business opportunities in the future.

Who are the major players dominating the cmos image sensor market?

What are the segments in the CMOS image sensor market?

The market is segmented by technology, end use industry, and by region.

Which segment captures the largest market size in end use industry in the CMOS image sensor market?

The automotive & transportation segment is anticipated to garner the largest market size by the end of 2031 and display significant growth opportunities.