The global cloud seeding equipment market is estimated to garner a significant revenue by the end of 2033 by growing at a CAGR of ~14% over the forecast period, i.e., 2023 – 2033. Further, the market generated a notable revenue in the year 2022. The growth of the market is primarily attributed to the worldwide increasing risk of water scarcity. For instance, for at least a month, nearly two-thirds of the world's population confronts severe scarcity of water. Furthermore, by 2030, nearly 710 million people are estimated to be relocated caused by severe water scarcity. 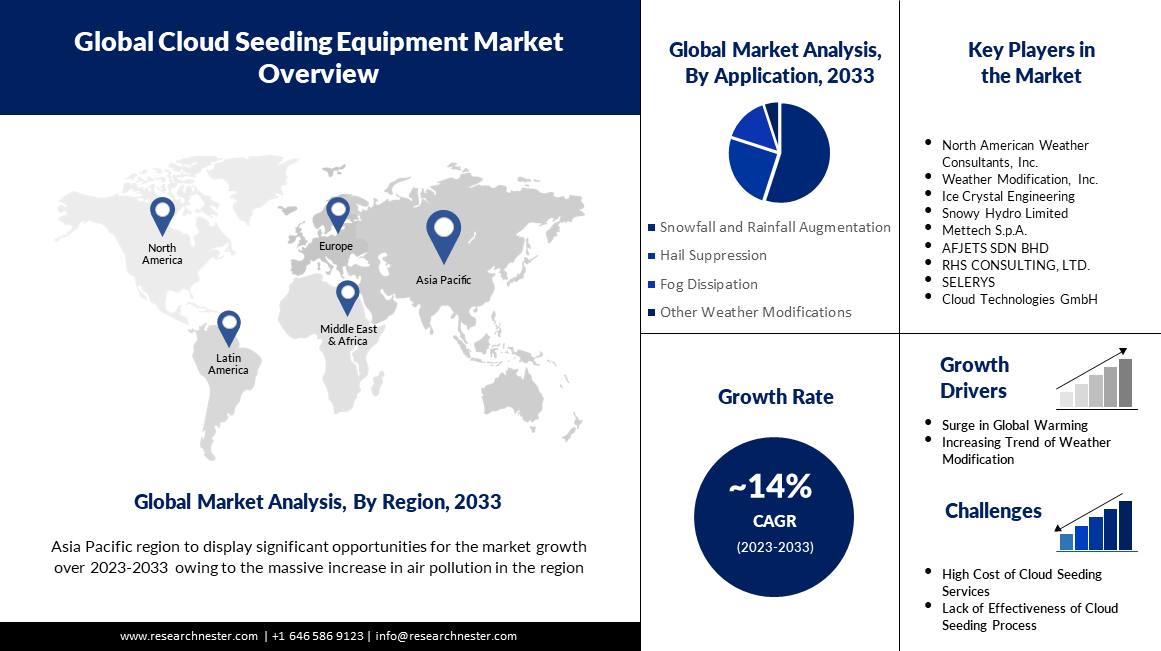 Cloud seeding is a weather modification process which involves dropping of chemical agents into clouds to cause rain. Cloud seeding equipment is utilized to distribute a substance into the atmosphere in order to boost the chances of precipitation. Silver iodide, dry ice and even common table salt are key chemical agents that are seeded into upper part of clouds.  This process stimulates the precipitation process and form rain. Governments’ increasing initiatives for promoting cloud seeding in those area which have been facing water scarcity is a major factor to drive the growth of the global cloud seeding equipment market. For instance, Saudi Arabia has initiated a cloud seeding program, with the first batch of flights over Riyadh, Qassim, and Hail. This cloud-seeding program targets to increase rainfall in the country, which is currently average nearly less than 100 millimeters per year.

The global cloud seeding equipment market is segmented and analyzed for demand and supply by application into hail suppression, fog dissipation, snowfall & rainfall augmentation, and other weather modifications. Out of these, the snowfall and rainfall augmentation segment is projected to significantly grow over the forecast period on the back of rising construction activities, escalating population, and surge in urbanization. For instance, as of May 2022, India has the most infrastructure construction projects in development or execution worth more than USD 24 million.

Regionally, the global cloud seeding equipment market is studied into five major regions including North America, Europe, Asia Pacific, Latin America and Middle East & Africa region. Amongst these markets, the market in Asia Pacific is projected to hold the largest market share by the end of 2033 backed by the decline in rainfall, growing scarcity of water, and massive increase in air pollution in the region. For instance, air pollution poses a major threat to the health of around 4 billion people (93%) in the Asia and Pacific region. Four Asian countries including China and India were among the top ten with the highest population-weighted average exposure to PM 2.5 in 2019. 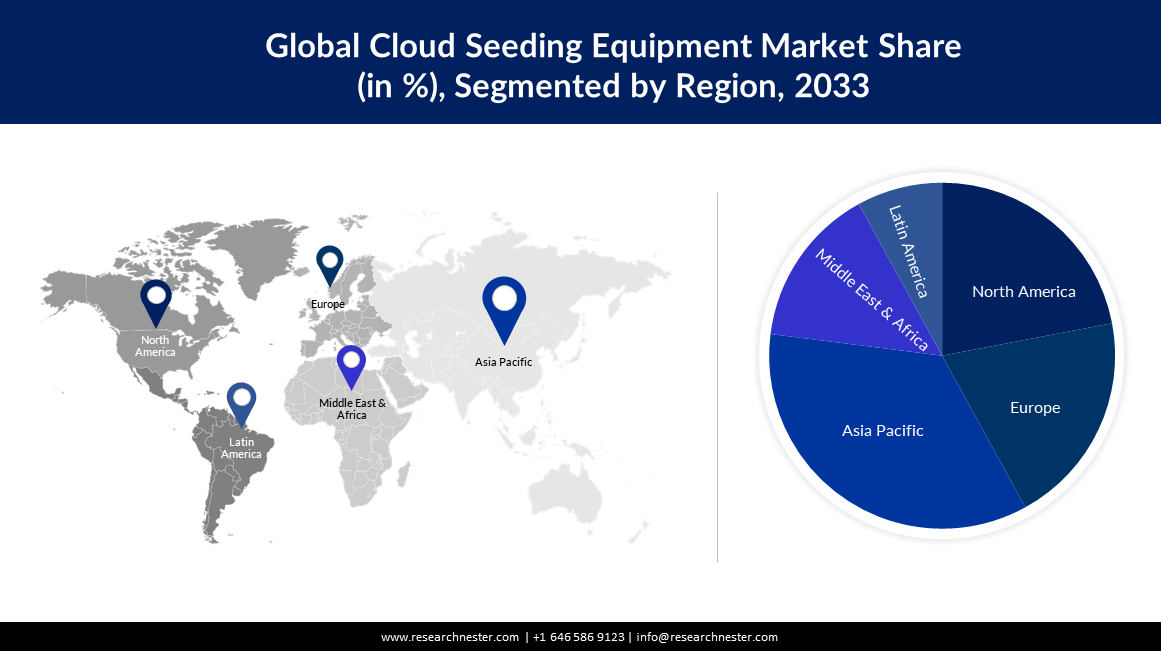 The global cloud seeding equipment market is further classified on the basis of region as follows:

What are the major factors driving the growth of the cloud seeding equipment market?

Surge in Global Warming, Worldwide Escalation in Air Pollution, Increasing Trend of Weather Modification, and Upsurge in Global Population are some major factors driving the growth of the market.

What would be the CAGR of cloud seeding equipment market over the forecast period?

What are the challenges affecting the cloud seeding equipment market growth?

High cost of cloud seeding services, lack of effectiveness of cloud seeding process, and risks of adverse effects associated with chemicals used in the process are estimated to hamper the market growth.

Which region will provide more business opportunities for growth of cloud seeding equipment market in future?

Who are the major players dominating the cloud seeding equipment market?

What are the segments in the cloud seeding equipment market?

The market is segmented by mode of seeding, application, and by region.

Which segment captures the largest market size in application segment in the cloud seeding equipment market?

The snowfall & rainfall augmentation segment is anticipated to garner the largest market size by the end of 2033 and display significant growth opportunities.