The global cling film market is estimated to grow by a significant CAGR during the forecast period, i.e., 2021-2029 owing to the diverse application of cling film such as food packaging, medical uses and others. Cling film are extensively used in the healthcare sector and pharmaceutical industries as first aid bandages owing to its impermeable surface which avoids any infection or moisture absorption which is estimated to boost the demand for cling film throughout the forecast period. Application of cling film in the food and hospitality industry owing to the ease of packaging food products is also estimated to boost the growth of the market. 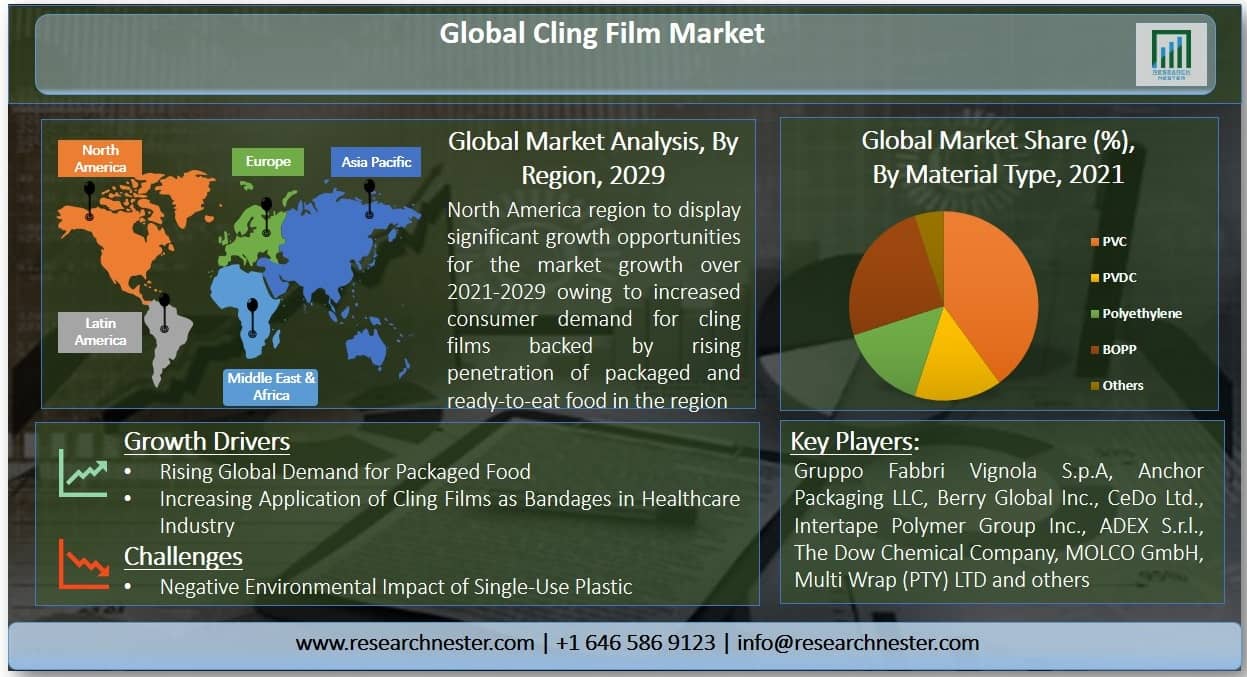 The global cling film market is divided on the basis of material type into PVC, PVDC, polyethylene, biaxially oriented polypropylene (BOPP), and others, out of which, the PVC segment is estimated to hold a substantial share in the market by the end of 2021, owing to the favorable properties of PVC cling film, such as, being microwave safe, easy to handle and are eco-friendly. Despite being thin, PVC film are firm and long-lasting, which is estimated to contribute to the growth of the segment. The market is further bifurcated by form into cast cling film and blown cling film, out of which, the cast cling film segment is projected to hold a generous share in the market throughout the forecast period. Cast cling film are manufactured using the cast extrusion process and offers two-sided cling properties. These are less expensive than blown cling film owing to its reduced manufacturing cost. These film have excellent clarity and allows users to see the wrapped products.CLICK TO DOWNLOAD SAMPLE REPORT

However, severe environmental impact of plastic owing to the growing use of single-use plastics is expected to hamper the growth of the global cling film market. Research from secondary sources states that, annually, over 13 million tons of plastic is dumped into the oceans, which causes depletion of the aquatic ecosystem.

The market in North America is estimated to garner highest revenue by the end of 2029, owing to the rising consumer demand for cling film for packaging and various other end-use purposes. Moreover, increasing penetration of packaged foods in nations such as the United States, is raising the need for food packaging materials, which in turn is anticipated to contribute to the market growth in the region.  Our analysis from secondary research sources concluded that online packaged food sales in the U.S. valued over USD 14 billion in the year 2020.

Asia-Pacific market is projected to witness significant CAGR throughout the forecast period owing to the presence of various healthcare companies using cling film for pharmaceutical purposes. Furthermore, increasing investments in the healthcare sector in the region is likely to boost the global cling film market in the region, for instance, according to the data by the World Health Organization, per capita healthcare expenditure in the East Asia and Pacific in 2018 accounted to USD 721.8 (in current US dollars). Moreover, growing adoption of packaged ready-to-eat food is foreseen to raise the demand for cling film in the region.

The global cling film market is further classified on the basis of region as follows:

Our in-depth analysis of the global cling film market includes the following segments:

What are the major factors driving the growth of the cling film market?

Growing adoption of packaged food worldwide is one of the major factors driving the market growth.

What would be the CAGR of cling film market over the forecast period?

What are the challenges affecting the cling film market growth?

Environmental concerns regarding the side effects of single-use plastic is the major factors estimated to hamper the market growth.

Which region will provide more business opportunities for growth of cling film market in future?

Asia Pacific will provide the highest growth opportunities for the market owing to the growing packaged food industry and increasing use of cling films in healthcare sector in the region.

Who are the major players dominating the cling film market?

What are the segments in the global cling film market?

The market is segmented by material type, form, thickness, end-user and region.

Which sub-segment under form segment captures the largest market share in the cling film market?

The cast cling film segment is anticipated to hold the largest market share during the forecast period on the back of its low manufacturing costs.