Chronic kidney disease (CKD) is a renal disorder characterized by gradual deterioration of the kidneys. In this condition, the functioning of kidney weakens and it is unable to filter the blood properly. This disorder results from various other health conditions, including heart diseases and diabetes that directly affect the kidneys. Since chronic kidney disease is a permanent condition, the damaged parts of kidney cannot be restored and lose their performing ability completely. In order to manage the symptoms up to a certain stage, medications are given to the patients. However, the later stages of the disorder might require dialysis or kidney transplantation.

The chronic kidney disease drugs market is anticipated to record a CAGR of around 4.5% over the forecast period, i.e., 2019-2027. The market is segmented by drug and by region, out of which, the drug segment is further segmented into antihypertensive agents, erythropoiesis-stimulating agents (EPAs), diuretics and others. On the basis of this, the antihypertensive agents segment is anticipated to hold the largest share in the chronic kidney disease drugs market on account of a greater demand for these drugs. Antihypertensive agents include the drugs which are used for lowering the blood pressure. As high blood pressure is a symptom of chronic kidney disease, these drugs help to control these symptoms and treat the condition. Erythropoietin-stimulating agents are taken in cases where the chronic kidney disorder is associated with anemia. These agents aid in the production of blood cells, which help treat the symptoms such as fatigue. CLICK TO DOWNLOAD SAMPLE REPORT 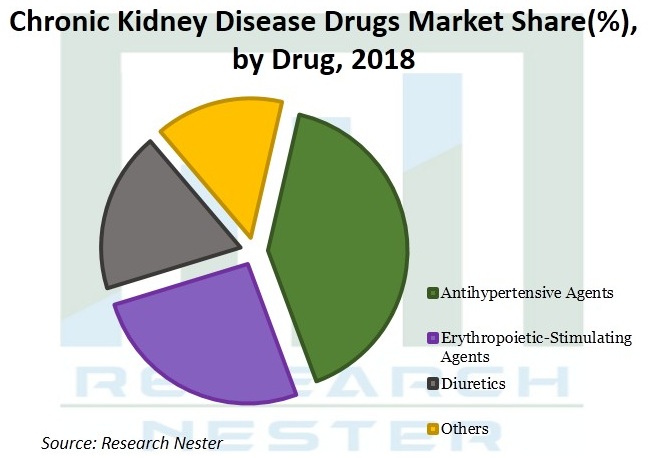 The market is estimated to observe a steady growth on account of growing incidences of renal diseases, which eventually lead to the development of chronic kidney disorder. According to a report published by the Centers for Disease Control and Prevention in 2019, , around 15% of adults living in the United States, which means about 37 million people, are estimated to have chronic kidney disease (CKD). Out of these, the current estimates suggest that the disease is not diagnosed in 9 in every 10 people living with CKD. Moreover, according to the current estimates, the prevalence of CKD is higher among the older population, i.e., people who are aged 65 years or more with 38% prevalence. For adults aged between 45 to 64 years, the incidence of this disorder is anticipated to be 13% while for adults aged between 18 and 44 years, it is 7%. Furthermore, the report states that chronic kidney disease is more common in women than men with 15% and 12% prevalence respectively. Further, the initiatives taken by government for the promotion of research activities as well as for increasing awareness among people about the disorder are predicted to result in the growing supply of improved drugs in the market.

As the geriatric population increases globally, the number of kidney related disorders among them is anticipated to grow substantially over the forecast period. These disorders such as diabetes, cardiovascular disease, obesity and high blood pressure directly impact the kidney and thereby result in the development of chronic kidney disorder. The requirement for effective treatment methods and drugs accompanying them is predicted to result in the growth of chronic kidney disease drugs market.

The increasing competition among various chronic kidney disease drugs available in the market is anticipated to become a growth restricting factor for the market. Moreover, people prefer generic drugs over branded ones owing to their cheaper costs, which is predicted to be another factor limiting the market growth in the upcoming years.

On the basis of regional analysis, the chronic kidney disease drugs market is segmented into five major regions including North America, Europe, Asia Pacific, Latin America and Middle East & Africa region. As a result of growing research and development activities and the presence of a large number of manufacturers, the chronic kidney disease drugs market in the North America region is projected to hold the largest market share during the forecast period. However, the highest rate of market growth is anticipated to be observed in the Asia Pacific region. This can be attributed to the large patient population with kidney disorders in the region and rising awareness about these renal disorders among them.

The chronic kidney disease drugs market is further classified on the basis of region as follows: