The global cervical retractors market is estimated to grow at a CAGR of ~9% over the forecast period, i.e., 2022 – 2031. Cervix is the connective tissue between vagina and the uterus, and cervical retractors are used to hold back the cervical tissues during a discectomy or surgical procedure. The growth of the market can be attributed to the increasing need for performing cervical or uterine surgeries, backed by the growing prevalence of cervical cancer. Cervical cancer, cervicitis, and cervical polyps are some of the most common disorders of the cervix. According to the data by the World Health Organization (WHO), in 2018, around 570,000 women were diagnosed with cervical cancer worldwide, and about 311,000 women died from the disease. Moreover, more and more women are opting hysterectomy, or the surgery to remove a part of the uterus, due to the rising incidences of polyps or tumors in the uterus. The growing adoption of invasive surgeries related to the reproductive system in women, is estimated to boost the market growth. 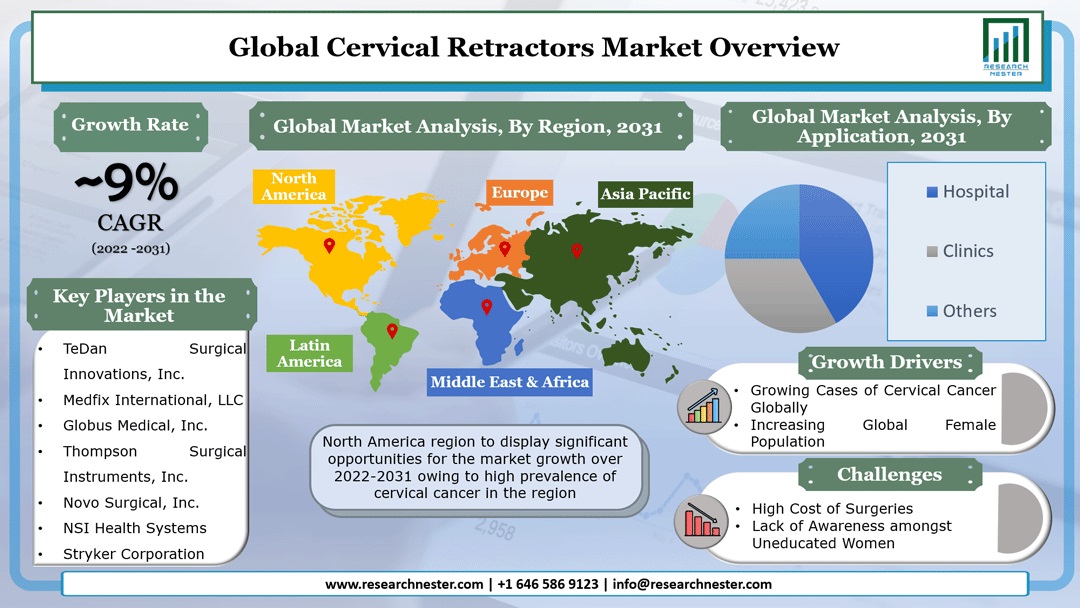 The market is segmented by end-user into hospital, clinic, and others, out of which, the hospital segment is anticipated to hold a substantial share in the global cervical retractors market over the forecast period on account of the increasing patient pool in the hospitals, along with the higher popularity of hospitals amongst people. CLICK TO DOWNLOAD SAMPLE REPORT

On the basis of geographical analysis, the global cervical retractors market is segmented into five major regions including North America, Europe, Asia Pacific, Latin America and Middle East & Africa region. The market in Asia Pacific region is estimated to witness noteworthy growth over the forecast period on the back of increasing population of women in the region, along with the improving healthcare infrastructure.

The market in the North America region is anticipated to gain the largest market share throughout the forecast period owing to the growing prevalence of cervical and vaginal cancers in the region. According to the data by the American Cancer Society (ACS), an estimated 14,100 women in the United States were diagnosed with invasive cervical cancer in 2021. Besides, higher healthcare expenditure in the region, and presence of patient-friendly reimbursement policies are anticipated to fuel the market growth. 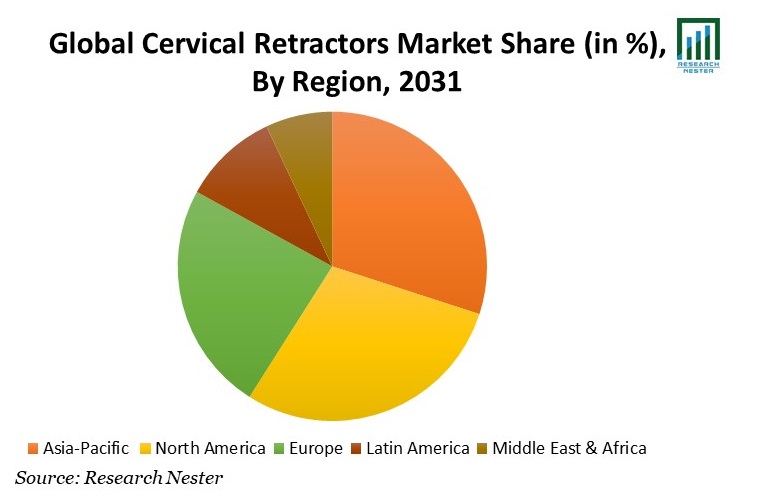 The global cervical retractors market is further classified on the basis of region as follows:

Our in-depth analysis of the global cervical retractors market includes the following segments:

What are the major factors driving the growth of the cervical retractors market?

Increasing prevalence of cervical cancer and other cervical disorders is estimated to boost the market growth.

What would be the CAGR of cervical retractors market over the forecast period?

Who are the major players dominating the cervical retractors market?

What are the segments in the cervical retractors market?

Which segment captures the largest market size in application segment in the cervical retractors market?

The hospital segment is anticipated to hold largest market size over the forecast period and display significant growth opportunities.

Lack of awareness amongst uneducated women is estimated to hamper the market growth.

Which region will provide more business opportunities for growth of the cervical retractors market in future?

The North America region is anticipated to provide more business opportunities over the forecast period owing to the high prevalence of cervical cancer in the region.