The immune system of the body is primarily made up of lymphocytes which consist of three kinds of cells: B lymphocytes or B cells, T lymphocytes or T cells and natural killer cells. Chimeric Antigen Receptor T-cell therapy, commonly known as the CAR T-cell therapy, is a form of immunotherapy being developed for use in the treatment of cancer at a genetic as well as cellular level. In recent years, the number of cases of cancer has risen significantly, which is resulting in the need for effective and targeted therapies for its treatment.

The CAR T-cell therapy involves extraction of the patient’s white blood cells, mainly T-cells, which are then modified to contain the gene for chimeric antigen receptor. These cells are then delivered back to the patient’s blood. The chimeric antigen receptor is a protein that specifically binds to the cancerous cells and therefore treats the condition.

The CAR T-cell therapy market is anticipated to record a CAGR of around 35% over the forecast period, i.e., 2020-2028. The market is segmented by indication, by target antigen and by region. On the basis of indication, the market is further segmented into acute lymphoblastic leukemia (ALL), chronic lymphoblastic leukemia (CLL), multiple myeloma (MM), diffuse large B cell lymphoma (DLBCL) and others, out of which, the DLBCL segment is anticipated to hold the largest share in the CAR T-cell therapy market on account of growing cases of the condition which raise the demand for CAR T-cell therapy. The segment for multiple myeloma is another segment anticipated to observe significant growth in the market as a result of rising research and development in that area. Based on target antigen, the CAR T-cell therapy market is segmented into CD19, CD20, CD22, CD30, GD2 and others. Out of these, the segments for CD19 and CD20 target antigens are anticipated to hold the largest shares in the market. This can be attributed to the high approval rate of therapies containing these antigens. CLICK TO DOWNLOAD SAMPLE REPORT 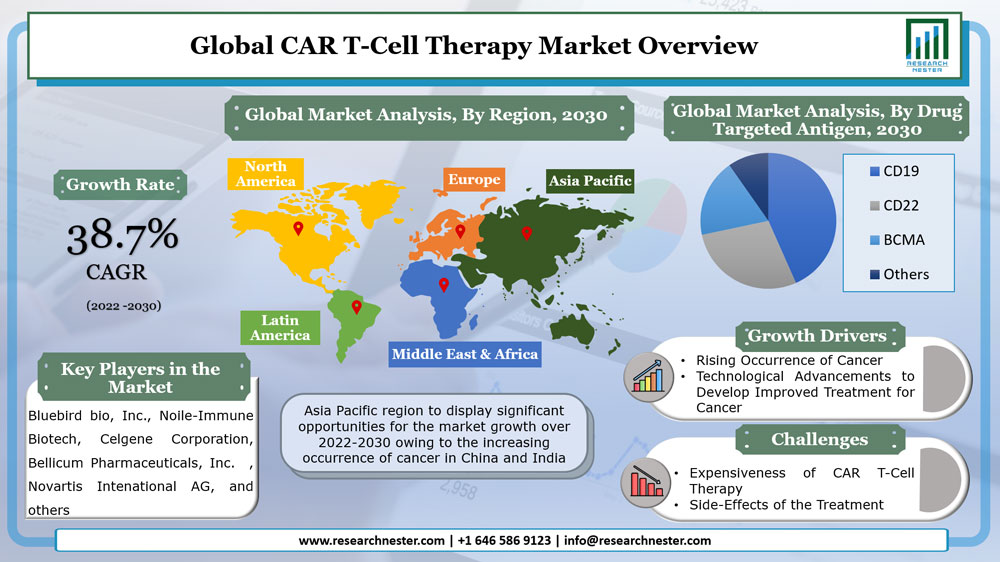 Rising Cases of Cancer Globally to Drive the Market Growth

According to the Leukemia & Lymphoma Society, approximately one person in the United States is diagnosed with a form of blood cancer every 3 minutes. Moreover, it was estimated that a total of 176,200 people in the U.S. would be diagnosed with leukemia, myeloma or lymphoma in 2019. Further, leukemia, myeloma and lymphoma were predicted to account for 10% of the total new cancer cases in 2019. The growing cases of various types of cancer all across the globe are estimated to become the major factor responsible for the growth of CAR T cell therapy market. As a result of this, the demand for effective treatment methods for cancer, which are targeted, increases significantly.

The various side effects associated with the CAR T cell therapy, such as cytokine release syndrome (CRS), pyrexia, reduced appetite, hypotension, headache, encephalopathy, nausea, bleeding and edema among several others are estimated to restrict the market growth. In addition to the harmful side effects, the high cost of obtaining this therapy is predicted to be another important factor hampering the market growth over the forecast period.

Our in-depth analysis of the CAR T-cell therapy market includes the following segments:

The market for CAR T cell therapy is predicted to hold the leading share in the North America region. This can be mainly attributed to the large share held by the market in the United States. The growing research and developments taking place in the field of CAR T cell therapy and cancer treatments in the region along with increasing number of treatments receiving approval by the U.S. Food and Drug Administration (FDA) are estimated to further boost the market growth. For instance, Kymriah is a CAR T cell therapy manufactured by Novartis and approved by the FDA in 2017. The therapy is for the treatment of acute lymphoblastic leukemia. The market in Europe is anticipated to hold the second largest share in the market as a result of growing approvals of CAR T cell therapies such as Kymriah and Yescarta by the European Medicines Agencies (EMA), which is further predicted to increase the market size over the coming years.

The CAR T-cell therapy market is further classified on the basis of region as follows:

What are the major factors driving the growth of the CAR T-Cell Therapy market?

The increasing research resulting in development of effective targeted therapies such as CAR T-cell therapy and growing cases of cancer are factors driving the market growth.

What would be the CAGR of CAR T-Cell Therapy market over the forecast period?

Which region will provide more business opportunities for growth of CAR T-Cell Therapy market in future?

North America is anticipated to provide more business opportunities for growth on account of growing FDA approvals of therapies in the United States.

Who are the major players dominating the CAR T-Cell Therapy market?