Candidiasis Drugs Market Segmentation by Disease Type (Oral, Vaginal, Cutaneous, Invasive, and Others); by Drug Type {Butoconazole, Clotrimazole, Miconazole (Monistat, Vagistat, and Others), Nystatin, Tioconazole, and Others}; and by End-User (Hospitals, Retail Pharmacies, and Others) – Global Demand Analysis & Opportunity Outlook 2030

The global candidiasis drugs market is estimated to grow at a CAGR of ~6% over the forecast period, i.e., 2022 – 2030. Candida is a yeast, that causes infection in the mucosal layer. The growth of the market can be attributed to the growing cases of yeast infection across the world, backed by poor immunity, sanitation practices, and others. The increasing health awareness, availability of anti-fungal drugs, and growing investment in development of new drugs, is estimated to boost the market growth. Candida is usually present inside the skin, in parts lined with mucous, such as the mouth, throat, gut, and vagina, without causing any problems. Infections are caused when the yeast grows out of control, due to high amount of sugar in blood, high humidity, or poor hygiene. Diabetes is a major factor for candidiasis infection, as raised blood sugar promotes yeast activation. The growing incidences of diabetes is estimated to boost the market growth over the forecast period. According to the report by the World Health Organization (WHO), 422 million people worldwide suffer from diabetes, in countries of all income levels, and around 1.6 million deaths are directly attributed to it each year. 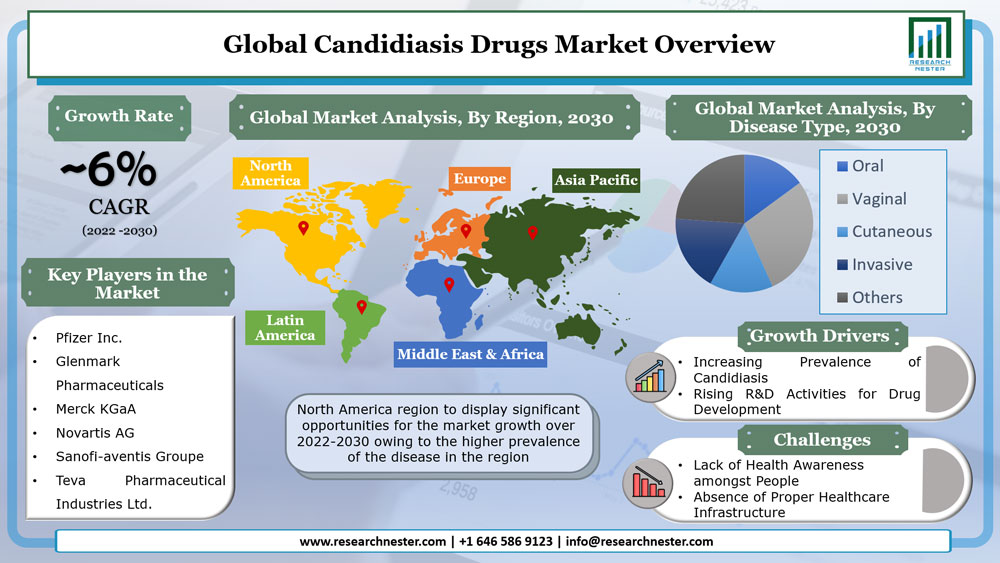 The market is segmented by disease type into oral, vaginal, cutaneous, invasive, and others, out of which, the vaginal segment is anticipated to hold the notable share in the global candidiasis drugs market over the forecast period on the back of the increasing cases of vaginal candidiasis, backed by lack of sexual health awareness and hygiene amongst individuals, especially in the middle and low-income countries. According to the data by the Center for Disease Control and Prevention (CDC), about 20% women who have candida in the vagina, do not notice any symptoms.

Vaginal candidiasis is not a sexually transmitted disease. It is caused due to poor hygiene, hot and humid environment around the vulva, sharing toilets, and even due to drinking less amount of water. Mild infections are often overlooked, due to the embarrassment and taboo associated with diseases in the private parts, resulting in severe infection and even hospitalization. This is a major factor expected to drive the segment growth. Pregnancy and hormonal contraceptives are also a major cause of candidiasis in the vagina.

On the basis of geographical analysis, the global candidiasis drugs market is segmented into five major regions including North America, Europe, Asia Pacific, Latin America and Middle East & Africa region. The market in the Asia Pacific region is estimated to witness noteworthy growth over the forecast period on the back of increasing prevalence of candidiasis, backed by the climatic conditions that promote yeast infection. Moreover, lack of proper sanitation in the region, and lower rate of health awareness, especially in rural parts of the developing countries, is estimated to boost the regional market growth. The market in the Middle East and Africa region is also estimated to witness significant growth owing to the lack of hygiene and sanitation, and hot & humid climate of the region.

The market in the North America region is anticipated to gain the largest market share throughout the forecast period owing to the constantly rising cases of candidiasis, especially invasive candidiasis in the region. As per a report by the CDC, approximately 25,000 cases of candidemia are recorded in the United States each year. The high prevalence of diabetes is one of the primary factors for the increasing candidiasis cases in the region. 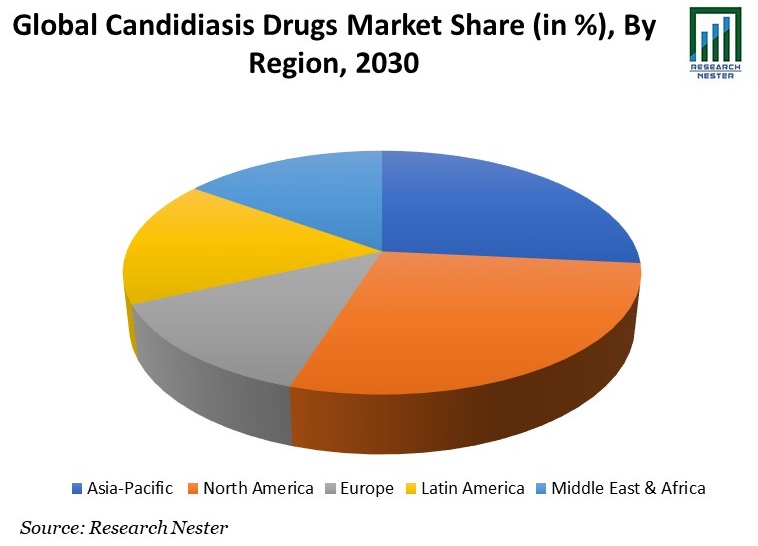 The global candidiasis drugs market is further classified on the basis of region as follows:

Our in-depth analysis of the global candidiasis drug market includes the following segments:

What are the major factors driving the growth of the candidiasis drugs market?

The increasing cases of candidiasis is estimated to boost the market growth.

What would be the CAGR of candidiasis drugs market over the forecast period?

What are the challenges affecting the candidiasis drugs market growth?

Which region will provide more business opportunities for growth of candidiasis drugs market in future?

Who are the major players dominating the candidiasis drugs market?

What are the segments in the candidiasis drugs market?

The market is segmented by disease type, drug type, end-user, and by region.

Which segment captures the largest market size in end-user segment in the candidiasis drugs market?

The hospital segment is anticipated to hold largest market size over the forecast period and display significant growth opportunities.