The global boron doped diamond electrode market is estimated to garner a revenue of USD 10.88 Million by the end of 2031, by growing at a CAGR of 7.11% over the forecast period, i.e., 2022 – 2031. Moreover, the market generated a revenue of USD 5.58 Million in the year 2021. The growth of the market can be attributed to the growing need for potable water and the increasing concern for water pollution, which is driving the need for chemical free water treatment solutions, and in turn, the demand for boron doped diamond electrodes. According to the statistics by the World Health Organization (WHO), more than 2 Billion people are known to live in water-stressed countries. Besides this, the statistics also stated that about 2 Billion people used a drinking water source which is contaminated with faeces. Diamond electrodes are particularly appealing for eliminating organic contaminants in water owing to their high overvoltage feature for the evolution of oxygen and for the ability to create hydroxyl radicals with high current efficiency anodically. Furthermore, the electrochemical techniques using diamond electrodes can be used to remediate water that has been contaminated with inorganic contaminants, such as nitrite or cyanide. 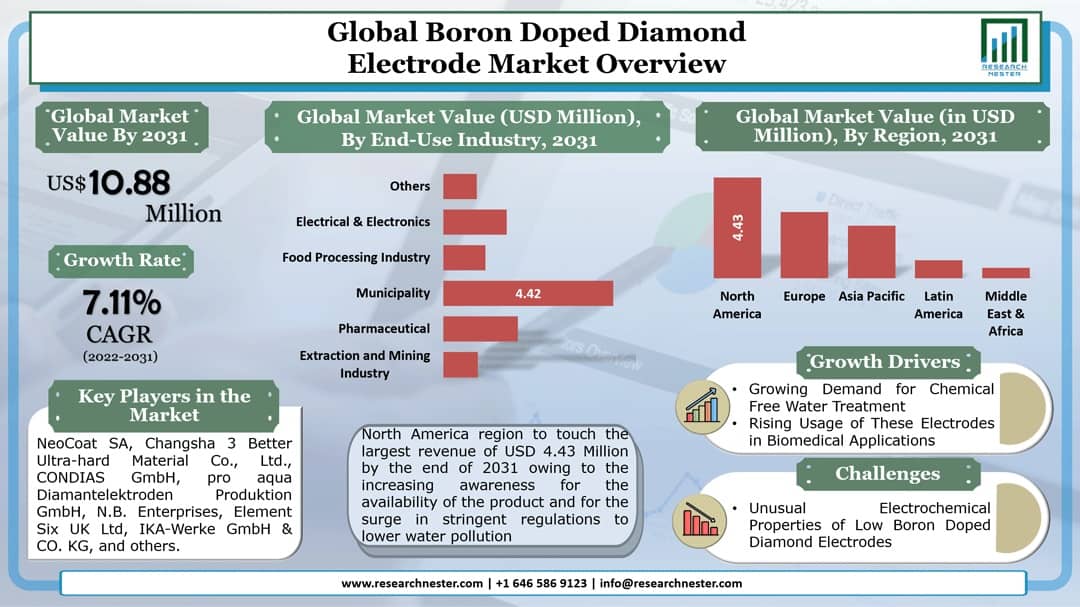 Regionally, the global boron doped diamond electrode market is segmented into five major regions including North America, Europe, Asia Pacific, Latin America and Middle East & Africa region. The market in North America is projected to garner the largest revenue of USD 4.43 Million by the end of 2031, up from a revenue of USD 2.22 Million in the year 2021. The growth of the market in the region can primarily be attributed to the increasing awareness for the availability of the product and for the surge in stringent regulations of the government of the nations that focus on adopting measures to lower water pollution. For instance, the United States Centers for Disease Control and Prevention (CDC), has et up the National Environmental Public Health Tracking tool that monitors the levels of several contaminants that can be found in drinking water. Besides this, the United States Environmental Protection Agency (EPA), had set up the Watershed Assessment, Tracking and Environmental Results System (WATERS) to improve communication and efficiency between the EPA databases, such as The Water Quality Portal, Total Maximum Daily Load (TMDL), and the Safe Drinking Water Information System (SDWIS). Similarly, the National Oceanic and Atmospheric Administration (NOAA) and the United States Geological Survey (USGS) had formed different governing bodies that focuses on forming strategies so as to lower water pollution. Such active measures by these regulatory bodies is therefore expected to drive the demand for boron doped diamond electrodes, and in turn, contribute to the growth of the market in the region.

1) What are the major factors driving the growth of the boron doped diamond electrode market?

Ans: The growing demand for chemical free water treatment, along with the rising usage of these electrodes in biomedical and analytical applications are some of the major factors anticipated to drive the market growth.

2) What would be the CAGR of boron doped diamond electrode market over the forecast period?

3) What are the challenges affecting the boron doped diamond electrode market growth?

Ans: The unusual electrochemical properties of low boron doped diamond electrodes is one of the major factors estimated to hamper the market growth.

Ans: The market in North America is projected to garner the largest revenue of USD 4.43 Million by the end of 2031 and provide more business opportunities.

5) Who are the major players dominating the boron doped diamond electrode market?

7) What are the segments in the boron doped diamond electrode market?

Ans: The market is segmented by product type, application, end-use industry, and by region.

Ans: The polycrystalline segment is anticipated to garner the largest revenue of USD 5.72 Million by the end of 2031 and display significant growth opportunities.