The global bio-solvents market is estimated to grow at a CAGR of ~4.5% over the forecast period, i.e., 2022 – 2030. The growth of the market can be attributed to the increasing adoption of bio-fuels as alternative to petrochemicals amongst the various end-users, backed by rising environment awareness, depleting fossil fuels, and fluctuating costs of crude oil. Bio-solvents have various applications, including bio-plastics and bio-diesel, which is estimated to boost the market growth. The growing environmental concerns amongst the government as well as the public, is one of the primary growth drivers for the market, as petroleum-based solvents release Volatile organic compounds, which cause air pollution and ozone depletion. Use of bio-solvents is not just climate-friendly, but also economically feasible, which is also estimated to boost the market growth. According to recent study by the U.S. Environmental Protection Agency (EPA), the use of biodiesel reduces greenhouse gas emissions by 57% to 86%, as of 2019. Moreover, in 2019, the global consumption of bio-fuels was 2.8 billion gallons. 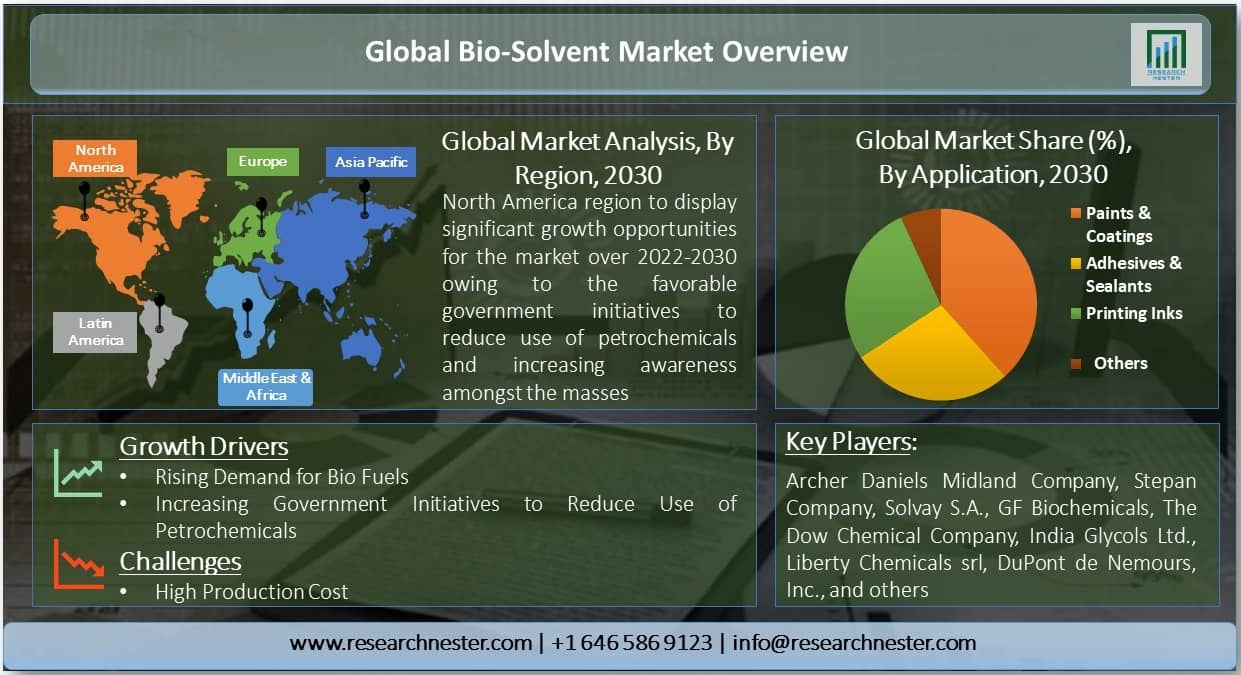 The bio-solvents market is segmented by type into bio-alcohols, glycols, esters, and others, out of which, the bio-alcohols segment is anticipated to hold the notable share in the market as it is replacing industrial solvent for many end-uses. Bio-alcohols are also prominently used as cleaners and disinfectants, which is estimated to boost the segment growth. On the basis of application, the market is segmented into paints & coatings, adhesive & sealants, printing ink, and others. Out of these, the paints & coatings segment is projected to gain notable market share over the forecast period, owing to the increasing demand for paints in the construction and automotive industry. CLICK TO DOWNLOAD SAMPLE REPORT

On the basis of geographical analysis, the global bio-solvents market is segmented into five major regions including North America, Europe, Asia Pacific, Latin America and Middle East & Africa region. The market in North America region is estimated to witness noteworthy growth over the forecast period on the back of increasing environment awareness amongst the masses, along with adoption of bio-fuels and bio-solvents amongst the manufacturers of chemical, paints, inks, and others. According to the data by the U.S. EIA, the United States consumed 44.38 million barrels of biodiesel in 2020. Moreover, rising adoption of bio-solvents in the pharmaceutical industry, is also estimated to boost the market growth in the region.

The market in the Asia Pacific region is projected to grow at the highest CAGR over the forecast period, on the back of growing chemical industry and high acceptance for lighter bio-fuels over petroleum-based naphtha, along with fluctuating process of crude oil. 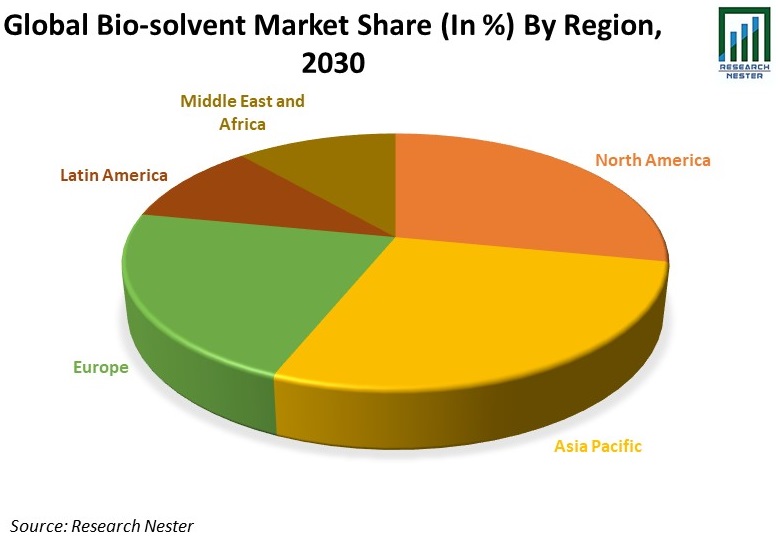 The global bio-solvents market is further classified on the basis of region as follows:

Our in-depth analysis of the global bio-solvents market includes the following segments:

What are the major factors driving the growth of the bio-solvents market?

Growing adoption of bio-fuels over petrochemicals, and increasing environmental awareness amongst people are the major growth drivers for the market.

What would be the CAGR of bio-solvents market over the forecast period?

What are the challenges affecting the bio-solvents market growth?

High production costs and lower performance are estimated to hamper the market growth.

Which region will provide more business opportunities for growth of bio-solvents market in future?

The market in the North America region is estimated to gain the largest share over the forecast period owing to increasing awareness among the major companies and the masses in the region.

Who are the major players dominating the bio-solvents market?

What are the segments in the bio-solvents market?

Which sub-segment captures the largest market size in application segment in the bio-solvents market?

The paints & coatings segment is anticipated to hold largest market size in value over the forecast period on the back of increasing demand for paints n construction industry.