Biaxially oriented polypropylene (BOPP) films market is estimated to grow at a significant CAGR during the forecast period, i.e., 2021-2029, owing to its wide application in food packaging backed by its inherent moisture barrier properties, sealing ability, and durability. These films also increases the shelf life and enhances the on-shelf appeal of the packaged product, which tends to be a limitation with the cling films. The rising trend of flexible plastic packaging combined with the need for contamination resistant food packaging, especially due to the growing concern for the COVID 19 pandemic, is estimated to drive the market growth. Moreover, BOPP films can be recycled multiple times, are biodegradable and non-toxic. Increasing use of BOPP is estimated to reduce plastic waste, which in turn, is anticipated to boost the market growth throughout the forecast period. It is estimated that over 100 million tons of plastic is consumed worldwide each year. 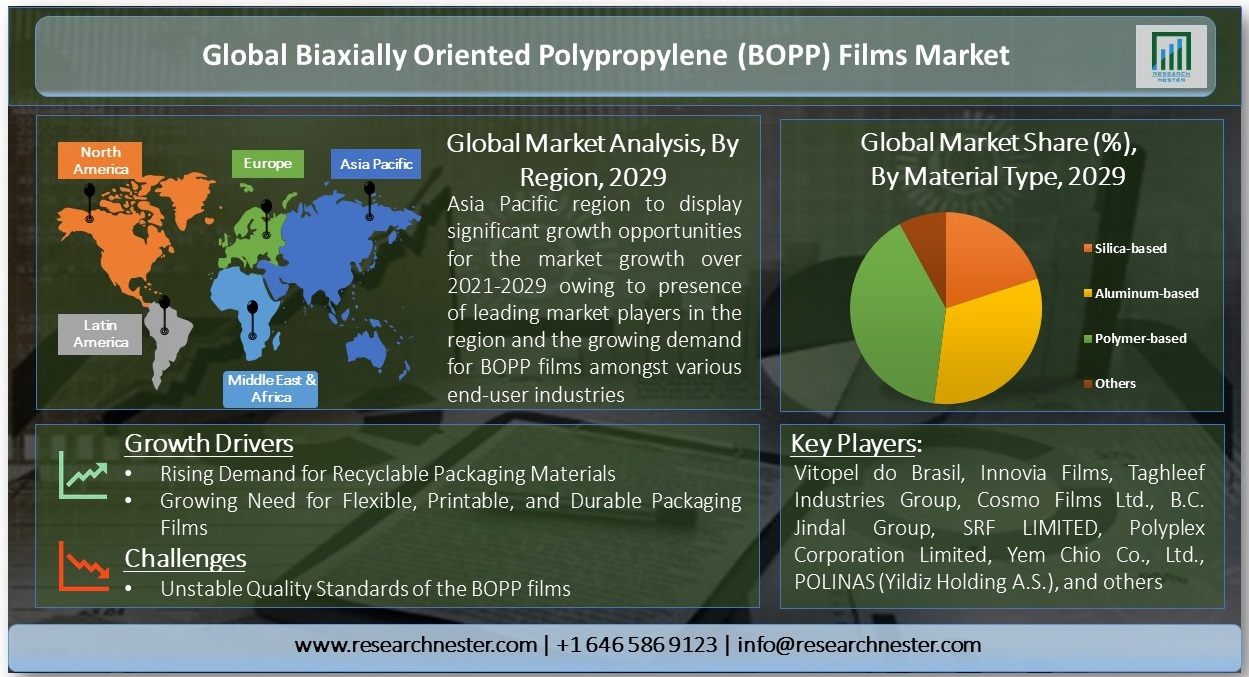 The global BOPP film market is segmented by material type into silica-based, aluminum-based, polymer-based, and others, out of which, the polymer based segment is estimated to hold the largest share during the forecast period owing to its highly inert chemical properties, moisture barrier properties and sealing ability. Ethylene vinyl alcohol (EVOH) is a copolymer, commonly used as an oxygen barrier in food packaging. Owing to its moldable, flexible, printable and protective properties, EVOH is the most prominently used polymer for manufacturing BOPP films.

On the basis of end-users, the fast-moving consumer goods segment is estimated to garner the largest share by the end of 2029 on account of increasing demand for packaged consumer goods. The modern fast paced lifestyle has resulted in an elevated consumption of ready-to-eat food and pre-packaged drinks over freshly cooked food. This, as a result, is raising the need amongst the food manufacturers to increasingly use BOPP films for the packaging of such food products, which is anticipated to contribute to the growth of the segment. CLICK TO DOWNLOAD SAMPLE REPORT

The market in Asia Pacific is anticipated to hold the largest market share throughout the forecast period on account of growing demand for BOPP films amongst various end-user industries such as food & beverages, medicine and personal care goods among others, for packaging their manufactured products. Moreover, presence of leading market players in countries, such as India and China, owing to the low manufacturing costs of the product and availability of cheap labor in the region is estimated to drive the growth of the market.

North America is anticipated to hold a significant market share by the end of 2029, on the back of growing demand for packaging materials in the pharmaceutical industry. Furthermore, the increasing government initiatives to curb the issues of solid wastes generated from single-use plastics, is estimated to encourage the demand for BOPP films among the end-users in the region. According to the data by the U.S. Environment Protection Agency (EPA), 292.4 million tons of solid municipal waste was generated in 2018. Moreover, plastic wastes accounted for more than 18% of the landfills in the U.S., in 2018. 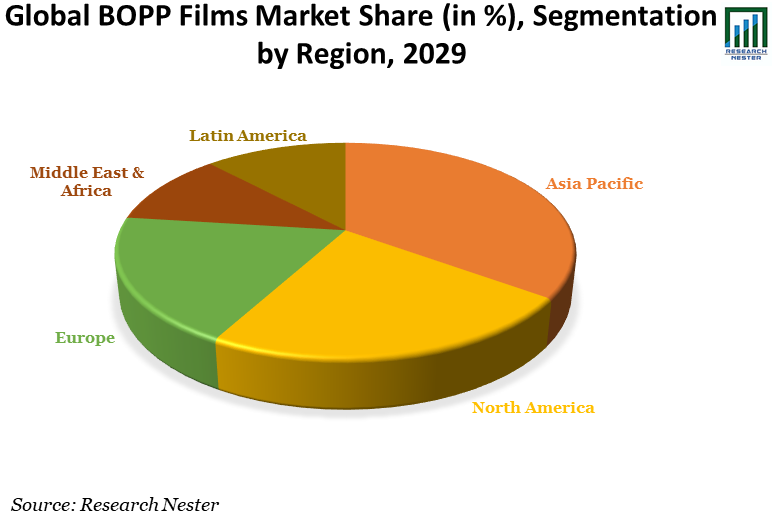 The global BOPP films market is further classified on the basis of regions as follows:

Our in-depth analysis of the global BOPP films market includes the following segments:

What are the major factors driving the growth of the Biaxially Oriented Polypropylene Films market?

Worldwide adoption of packaged food is one of the major factors driving the market growth.

What would be the CAGR of Biaxially Oriented Polypropylene Films market over the forecast period?

What are the challenges affecting the Biaxially Oriented Polypropylene Films market growth?

Fluctuating quality standard of plastic is one of the major factors estimated to hamper the market growth.

The market in the Asia Pacific region will provide the highest growth opportunities on the back of presence of major key players in the region along with large consumer base for BOPP films.

Who are the major players dominating the Biaxially Oriented Polypropylene Films market?

What are the segments in the BOPP films market?

The market is segmented by material type, product type, application, end-user industry, and by region.

Which sub-segment under end-user segment captures the largest market size in the global BOPP films market?

The FMCG segment is anticipated to hold largest market size by the end of 2029, on the back of high demand for packaged consumer goods as a result of fast paced lifestyle of the people.