The global Bell’s palsy treatment market is estimated to grow at a CAGR of ~9% over the forecast period, i.e., 2022 – 2030. The growth of the market can be attributed to the rising prevalence of viral infections, such as, chickenpox, rubella, herpes, and others, which are the primary cause of Bell’s palsy. According to the data by the U.S. National Library of Medicine, around 23 out of every 100,000 people are affected by Bell’s palsy per year across the globe. In this disease, inflammation occurs in the nerve that controls facial muscles, causing partial or even complete face paralysis. In most cases, control of either side of the face is lost, due to which one side droops down. Though, in most cases, the inflammation reduces in a few days or weeks, in some rare cases, it can be permanent or recurring. According to the report by the National Organization for Rare Disorders (NORD), approximately 80% of all cases are cured within three months. Targeting the viral infection is the most common treatment method adopted by doctors. The increasing cases of diabetes, AIDS, and other diseases which reduce or compromise the immunity of the patients, are estimated to boost the market growth, along with the unhealthy lifestyle of the population. 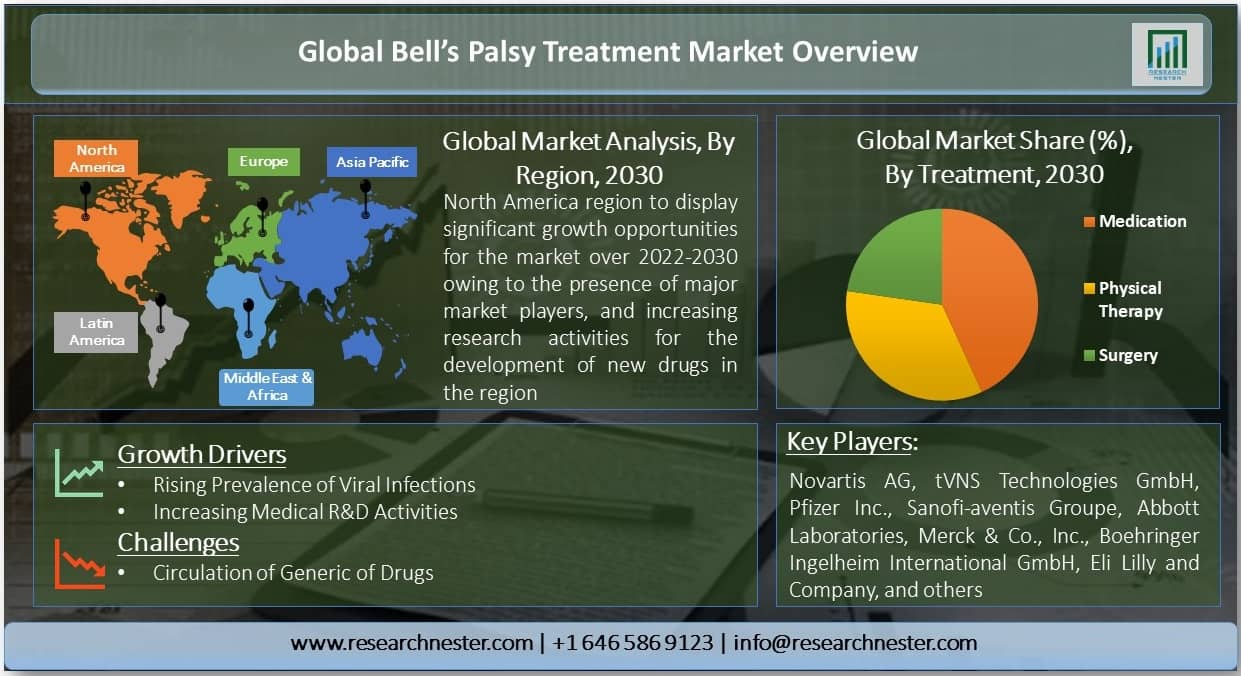 The market is segmented by treatment into medication, physical therapy, and surgery, out of which, the medication segment is anticipated to hold the largest revenue share in the global Bell’s palsy treatment market over the forecast period on the back of increasing prevalence of this disease, as most doctors opt drugs and medications for treating the neurological condition, and the viral infection. Surgery is required only in most critical cases.

On the basis of geographical analysis, the global Bell’s palsy treatment market is segmented into five major regions including North America, Europe, Asia Pacific, Latin America and Middle East & Africa region. The market in Asia Pacific region is estimated to witness substantial growth over the forecast period on the back of emergent healthcare infrastructure and improved medical facilities available in developing nations, such as, India, Bangladesh, and Indonesia. Moreover, lack of sanitation and health awareness is a major issue in developing countries, which can be a cause for viral infection. This is estimated to boost the market growth.

The market in the North America region is anticipated to gain the largest market share throughout the forecast period on account of high healthcare expenditure, presence of major pharmaceutical companies, and increasing research activities for the development of new drugs. According to the statistics by the World Bank, in 2018, North America spent USD 10,050.516 for the healthcare of every individual. The total healthcare expenditure accounted for 16.415% of the total GDP of North America. 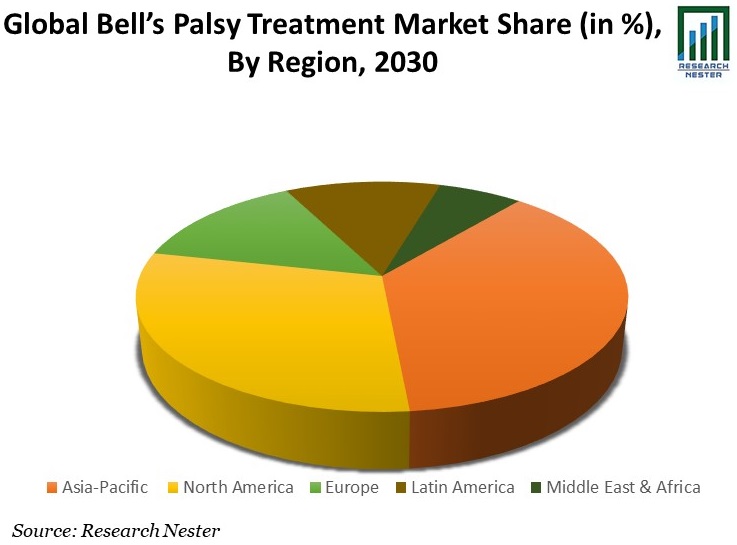 The global Bell’s palsy treatment market is further classified on the basis of region as follows:

What are the major factors driving the growth of the Bell's palsy treatment market?

The increasing prevalence of viral infection due to poor immunity and unhealthy lifestyle is estimated to boost the market growth.

What would be the CAGR of Bell's palsy treatment market over the forecast period?

What are the challenges affecting the Bell's palsy treatment market growth?

The increasing circulation of generic drugs is estimated to hamper the market growth.

Which region will provide more business opportunities for growth of Bell's palsy treatment market in future?

The market in the North America is estimated to witness growth with highest CAGR over the forecast period, owing to the high health awareness and advanced healthcare facilities in the region.

Who are the major players dominating the Bell's palsy treatment market?

What are the segments in the Bell’s palsy treatment market?

The market is segmented by diagnosis, treatment, end-user, and by region.

Which segment captures the largest market size in treatment segment in the Bell’s palsy treatment market?

The medication segment is anticipated to hold largest market size in value over the forecast period and display significant growth opportunities.