An automobile transmission is a key element of an automobile. It helps to control the power generated by the engine and transfer it to the wheels. The main purpose of the transmission is to provide smooth functioning of the engine at various speeds. That is why a lower gear is used from the transmission when moving slowly, and a higher gear is used when driving more swiftly. Transmissions come in many forms and are built to fit the primary purpose of any vehicle type. For instance, in most modern passenger cars, an automatic transmission is used, which utilizes sensors, computers, and actuators to regulate the clutch at the ideal moment based on the current speed, the amount of accelerator pressure applied, and other parameters rather than relying on human control. Another very common form of automotive transmission is a manual transmission. With manual gearboxes, the driver must use the clutch and gearshift lever to manually change gears.  Semi-automatic transmissions are also an option when buying an automobile, and they employ an automatic gearbox with the option of manual shifting. CVT or continuously variable transmission uses a belt and pulley system in place of gears to provide smooth gear ratio changes.

Apart from that, various other forms of gearboxes and transmissions, involving anywhere between 3 to 8 gears are available with various other specifications such as the single or double-clutch options to choose from.

The global automotive transmission market is estimated to garner a revenue of ~USD 98 billion by the end of 2033 by growing at a CAGR of ~6% over the forecast period, i.e., 2023 – 2033. Further, the market generated a revenue of ~USD 60 billion in the year 2022. The growth of the market can primarily be attributed to the growing demand for vehicles worldwide. Furthermore, the global demand for cars is rising as a result of factors including population expansion, urbanization, and economic expansion. As populations and economies continue to grow, more people can afford and desire personal vehicles. Urbanization also drives demand for automobiles as people living in cities often rely on cars for transportation owing to limited public transportation options. In addition, factors such as increasing disposable income and a growing middle class in many countries are also contributing to the growing demand for automobiles. Particularly in emerging nations, these demographics are more inclined to own vehicles. The growing demand for automobiles also creates opportunities for the manufacturing and sales of cars, as well as the development of related industries such as parts suppliers, and maintenance and repair services. For instance, more than 82.5 million vehicles were sold worldwide in 2021.

Automotive transmission is what moves the power from the engine to the wheels. Transmissions are necessary for any motor vehicle to prevent the engine from destroying itself. Most car engines would shake themselves to pieces or overheat without a gearbox system. Furthermore, any car without a transmission would be unable to harness the engine’s speed, capping its maximum velocity. With rising sales of vehicles as well as cars, the demand for automotive transmission is on the rise amongst car users, which in turn, is expected to create massive revenue generation opportunities for the key players operating in the global automotive transmission market during the forecast period. For instance, nearly 2 million total cars sold were in China in 2020.

The global automotive transmission market is segmented and analyzed for demand and supply by engine type segment into internal combustion engines (ICE) and electric engines. Amongst these segments, the electric engines segment is anticipated to garner the largest revenue by the end of 2033. Transmission systems in electric cars (EVs) are frequently significantly simpler than those in conventional internal combustion engine vehicles. There is no need for gears to boost torque at low speeds since, unlike internal combustion engines, electric motors can create their full torque from a complete stop. Owing to this, the majority of EVs only have a single-speed gearbox. An electric vehicle employs a gear reduction system, sometimes known as a gearbox, in place of a conventional transmission to convert the high-speed rotation of the electric motor to the slower revolution of the driving wheels. This gear reduction system can either be a direct drive system—integrated directly into the electric motor—or a separate component. Therefore, backed by the growing fleet of electric vehicles along with the surge in the sales of electric cars worldwide, the segment will boom. For instance, the electric car fleet is expected to become more than 300 million in 2030 with electric cars accounting for 60% of new car sales globally.

The global automotive transmission market is also segmented and analyzed for demand and supply by vehicle type into passenger vehicles, light commercial vehicles, and heavy commercial vehicles. Out of these segments, the light motor vehicle segment is projected to produce the most revenue by 2033 and garner the largest market share. Vehicles that are generally lighter and smaller in size and weight and are intended for personal transportation are referred to as light motor vehicles. Typically, this market sector consists of passenger automobiles and light trucks such as pickups, SUVs, and vans.  Light motor vehicles are preferred for urban use and personal transportation since they are typically thought to be more efficient and simpler to operate than bigger vehicles. Many people worldwide are buying cars with rising disposable incomes and choosing the safety and security that a car provides. Hence, it is projected that there will be over 255 million light motor vehicles in the U.S.  alone by 2030.

Our in-depth analysis of the global automotive transmission market includes the following segments: 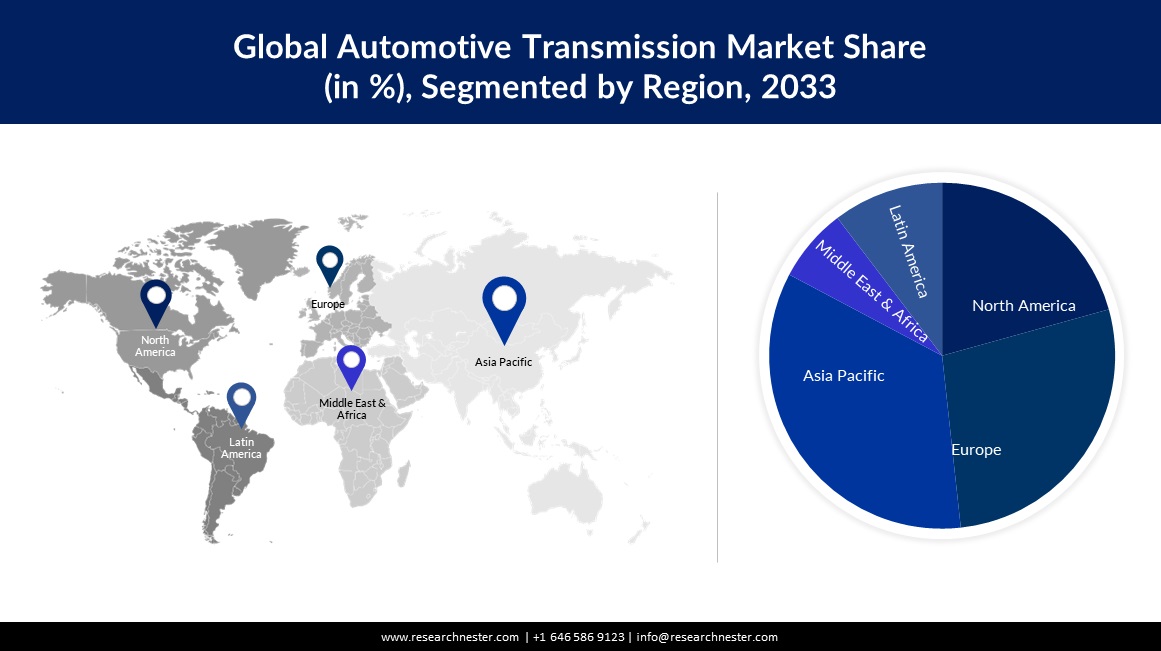 1) What are the major factors driving the growth of the automotive transmission market?

Ans: Upsurge in the sales of vehicles as well as rising number of wheels along with surge in the demand for autonomous vehicles are some of the major factors anticipated to drive the growth of the market.

2) What would be the CAGR of automotive transmission market over the forecast period?

3) What are the challenges affecting the automotive transmission market growth?

Ans: Requires huge investment as the cost of various components required in a transmission system is high are some of the factors estimated to hamper the market growth.

4) Which region will provide more business opportunities for growth of automotive transmission market in future?

5) Who are the major players dominating the automotive transmission market?

7) What are the segments in the automotive transmission market?

Ans: The market is segmented by type, engine type, vehicle type, and by region.

8) Which segment captures the largest market size in the engine type segment in the automotive transmission market?

Ans: The electric engines segment is anticipated to garner the largest market size by the end of 2033 and display significant growth opportunities.