The global automotive tinting film market is estimated to garner a revenue of ~USD 5 Billion by the end of 2033 by growing at a CAGR of ~5% over the forecast period, i.e., 2023 – 2033. Further, the market generated a revenue of ~USD 3 Billion in the year 2022. The primary factor that is attributed to the market growth in the assessment period is the rapid expansion of the automotive industry. As per the estimations, the revenue generation by the global automotive industry is anticipated to stand at almost USD 9 trillion by 2030. 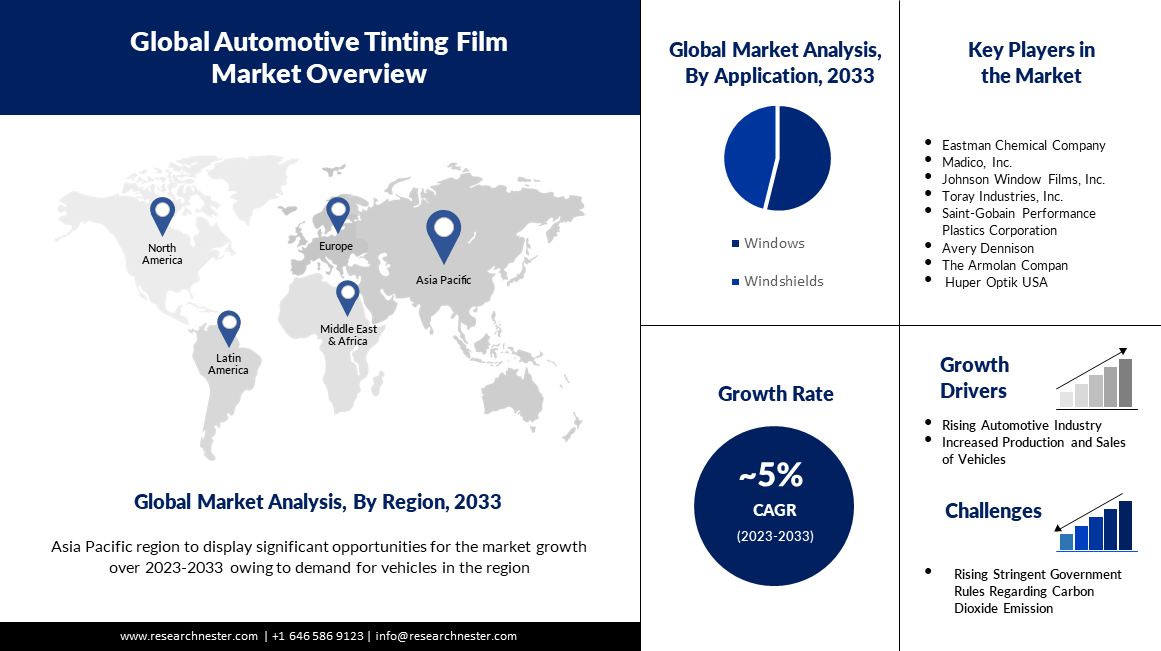 Heat and glare reduction functions are expected to drive the demand for automotive tinting film owing to their advantages, which include a desired level of comfort by stopping the maximum percentage of sun rays by reflecting them back at the sky or dispersing them around. Furthermore, these films not only protect against the sun's and UV rays, but also any physical object that comes through the window in the event of a car crash or accident. This trend is expected to raise the adoption rate considerably in the automotive industry. A recent report stated that in 2018, the Indian automotive industry employed approximately 2 million people.

Regionally, the global automotive tinting film market is studied into five major regions including North America, Europe, Asia Pacific, Latin America and Middle East & Africa region. Amongst these markets, the market in Asia Pacific is projected to hold the largest market share by the end of 2033. The rising the population along with their income levels have increased the demand of vehicles which, in turn, is expected to bring lucrative growth opportunities for automotive tinting film market. The total production of vehicles in the region was 46 million in 2021, whereas, the total sales in the region was 42 million in 2021 as per statistics released by International Organization of Motor Vehicles (OICA). Also, the presence of leading key players and exporters in the region is an another factor that is expected to affect the market positively.  China, a country of Asia Pacific is estimated to have exported around 400,000 commercial vehicles and around 2 million passenger vehicles in the year 2021. 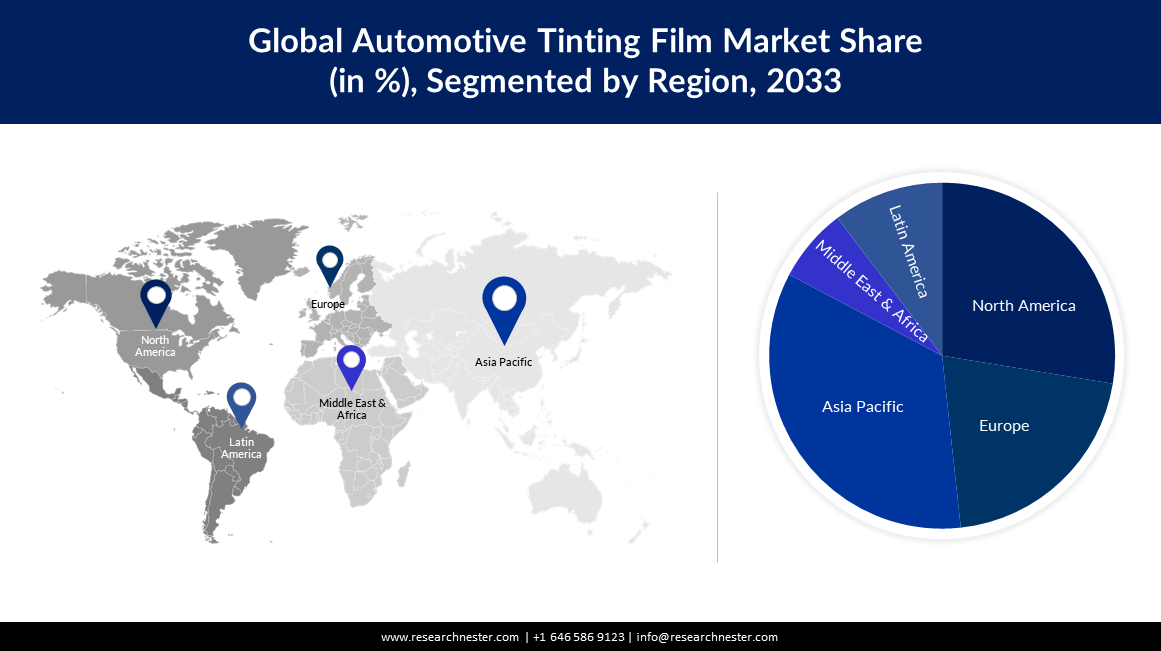 The global automotive tinting film market is further classified on the basis of region as follows:

What are the major factors driving the growth of the automotive tinting film market?

The expansion in automotive industry and the increased demand for vehicles is expected to fuel the market growth in the future.

What would be the CAGR of automotive tinting film market over the forecast period?

What are the challenges affecting the automotive tinting film market growth?

The extra expenses incurred in production cycles along with low adoption rate in developing countries and rising governmental policies regarding pollutants emission by vehicles are some of the factors that are expected to hamper the market growth.

Which region will provide more business opportunities for growth of automotive tinting film market in future?

Who are the major players dominating the automotive tinting film market?

What are the segments in the automotive tinting film market?

The market is segmented by application, vehicle type, and by region.

Which segment captures the largest market size in vehicle type in the automotive tinting film market?

The passenger car segment is anticipated to garner the largest market size by the end of 2033 and display significant growth opportunities.