Automotive brakes are mechanical devices used to slow down or stop moving vehicles. The brake system has become an integral part of any vehicle to ensure safety as the demand for speed increases continuously. Usually, friction is used to achieve these results. The brake system consists of a number of parts, including brake liners, brake shoes, tandem master cylinders, brake calipers, brake pads, drums, brake boosters, pistons, rotors, connecting tubes, and ports. Automotive brakes are increasingly being used as the sale of vehicles have increased.

The global automotive brake system market is estimated to garner a revenue of USD 38 Billion by the end of 2033 by growing at a CAGR of ~5% over the forecast period, i.e., 2023 – 2033. Further, the market generated a revenue of USD 23 Billion in the year 2023. The growth of the market can be attributed primarily to the increasing production and sales of commercial vehicles worldwide, the increasing inclusion of advanced brake systems such as electronic brakeforce distribution and anti-lock brake systems (ABS), and rising domestic population demand. For instance, the number of commercial vehicles sold increased by 8.21% from 54,000 units sold in August 2021 to 67,100 units in August 2022. 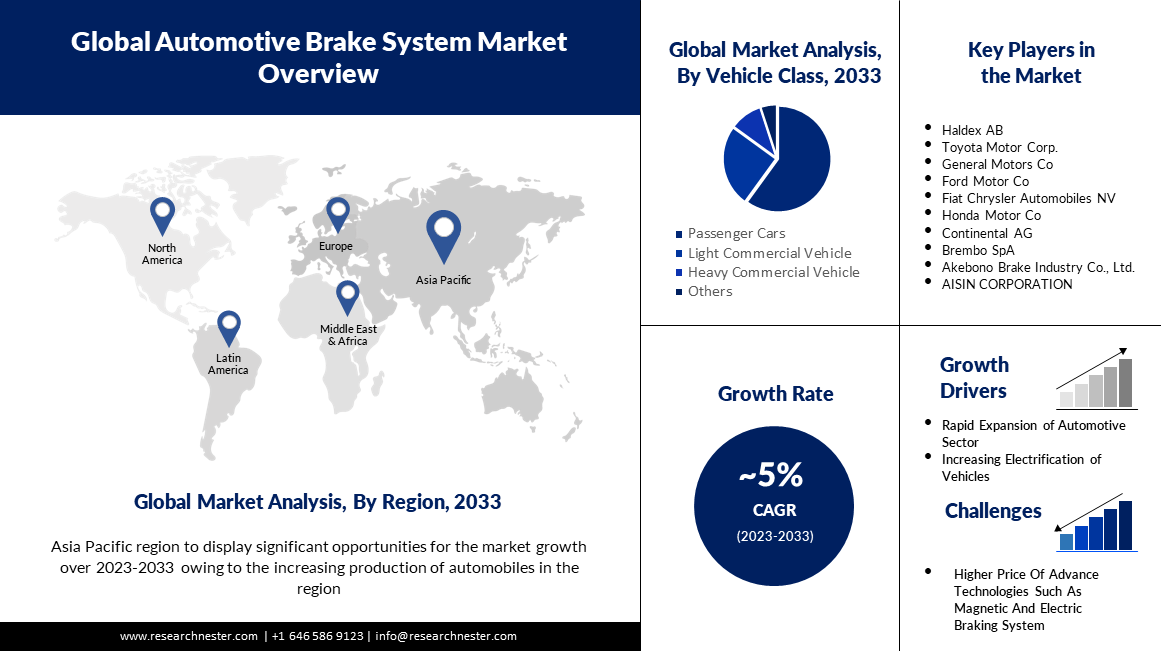 Moreover, technological advancement in vehicles, the emergence of improved braking systems, increasing R&D activities, rising demand for autonomous vehicles, and the growing popularity of disc brakes in commercial cars coupled with increasing per capita income are all contributing factors expected to fuel global automotive brake system market growth over the forecast period. For instance, a 9% increase in disposable income was recorded by China citizens in 2021, reaching USD 5,200 per head.

The implementation and development of the smart barking system for automobiles resulted in a reduced number of accidents. As a result of the latest advancements, the vehicle is prevented from skidding, thereby reducing the risk of accidents. The increasing number of road traffic fatalities has prompted the major players to adopt robust safety features. Thus, the rapid rise in the production of automobiles coupled with the rising number of traffic accidents is anticipated to drive automotive brake system growth over the forecast period.

The global automotive brake system market is segmented and analyzed for demand and supply by vehicle class into passenger cars, light commercial vehicles, heavy commercial vehicles, and others. Among these segments, the passenger cars segment is anticipated to capture the largest market size in the global automotive brake system market backed by the increasing trade and sales of passenger cars around the globe. For instance, in 2021, a total of 55 million passenger cars were sold worldwide, which was an increase from 52 million cars sold in 2020. In addition, the adoption of advanced technologies in the manufacturing of passenger vehicles, the growing demand for automated vehicles with high safety features, and economic growth are expected to augment segment growth in the coming years.

The Asia Pacific region automotive brake system market, amongst the market in all the other regions, is projected to hold the largest market share by the end of 2033. The increasing automobile production and rising demand for vehicles in the region. It was observed that over the past decade, the number of cars on the road in China has increased by an astounding 180% - from about 103 million in 2011 to about 300 million in 2021. Moreover, an increase in the middle-class population, a variety of financing options, higher living standards, and expanding trade ventures, and affordability of raw materials and low-cost labor in the region are expected to drive automotive brake system market growth in Asia Pacific over the forecast period.

1) What are the major factors driving the growth of the automotive brake system market?

Ans: Rapid expansion of automotive sector, rising electrification of vehicles, along with increasing motor vehicle production are the major factors driving the growth of the automotive brake system market.

2) What would be the CAGR of automotive brake system market over the forecast period?

3) What are the challenges affecting the automotive brake system market growth?

Ans: Higher price of advance technologies such as magnetic and electric braking system is expected to hinder market growth.

4) Which region will provide more business opportunities for growth of automotive brake system market in future?

5) Who are the major players dominating the automotive brake system market?

7) What are the segments in the automotive brake system market?

Ans: The market is segmented by product type, application type, vehicle class and, by region.

Ans: The passenger cars segment is anticipated to garner the largest market size by the end of 2033 and display significant growth opportunities.