The global autoclaved aerated concrete (AAC) market is estimated to garner a hefty amount of revenue by recording a CAGR of ~6% over the forecast period, i.e., 2022 – 2030. The growth of the market can be attributed to the robust growth of the infrastructure sector in the recent years, rising industrialization and urbanization, and increasing demand for lightweight construction materials around the world. According to the World Bank, in 2018, 55.272 percent of total population lived in urban areas, which reached up to 56.15 percent in the year 2020. The urban population of the world has only increased since 1960. Along with these, rapid increase in population is also giving rise to the high demand for affordable housing in metropolitan cities, which is another factor projected to boost market growth in the region. Furthermore, growing emphasis of governmental and non-governmental agencies in developing nations on soundproof and green buildings is expected to offer ample opportunities for market growth in the near future. 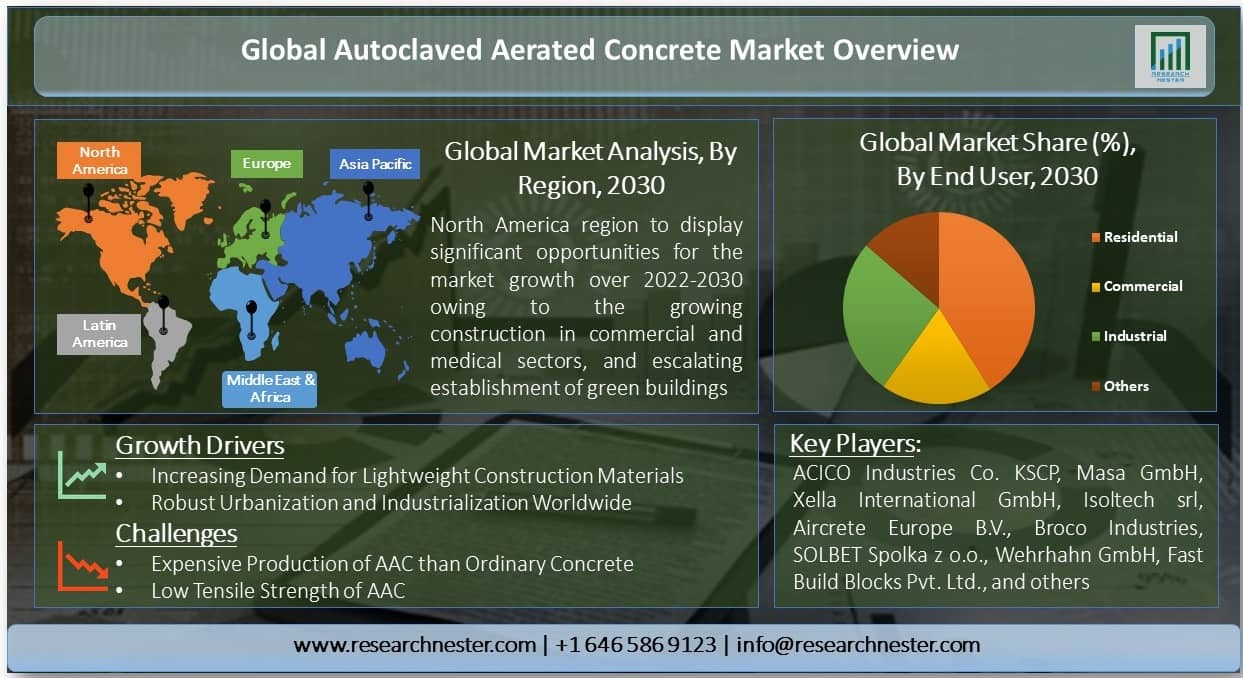 The market is segmented by type into block, panel, tile, lintel, and others, out of which, the block segment is anticipated to witness the highest growth in the global autoclaved aerated concrete market on account of the rise in demand for AAC blocks in several non-residential and residential industries, and ease of installation of this product. Additionally, on the basis of end user, the residential segment is predicted to gather the largest share over the forecast period, which can be credited to the growing demand for environment-friendly building materials, and increasing number of living and working spaces in urban areas. Since 2017, the total number of green homes have increased by almost 20 percent. It is evaluated that the global green building industry alone is capable of reducing the energy consumption by more than 50 percent by 2050. CLICK TO DOWNLOAD SAMPLE REPORT

On the basis of geographical analysis, the global autoclaved aerated concrete market is segmented into five major regions including North America, Europe, Asia Pacific, Latin America and the Middle East & Africa region. The market in North America is estimated to witness noteworthy growth over the forecast period on the back of increasing number of construction activities in the commercial and medical sectors, and growing establishment of green buildings in the region. In 2018, construction activities worth more than USD 42.5 billion were put in place in the healthcare sector in the United States. The value rose up to USD 43.6 in 2019. Moreover, the market in Asia Pacific is assessed to occupy the largest share during the forecast period, which can be ascribed to the rising demand for AAC from the construction sector of countries, namely China, India and South Korea, and rapid rate of industrialization in the region. In addition, easy availability of raw materials and presence of cheap labor are also projected to boost the market growth in APAC in the coming years. 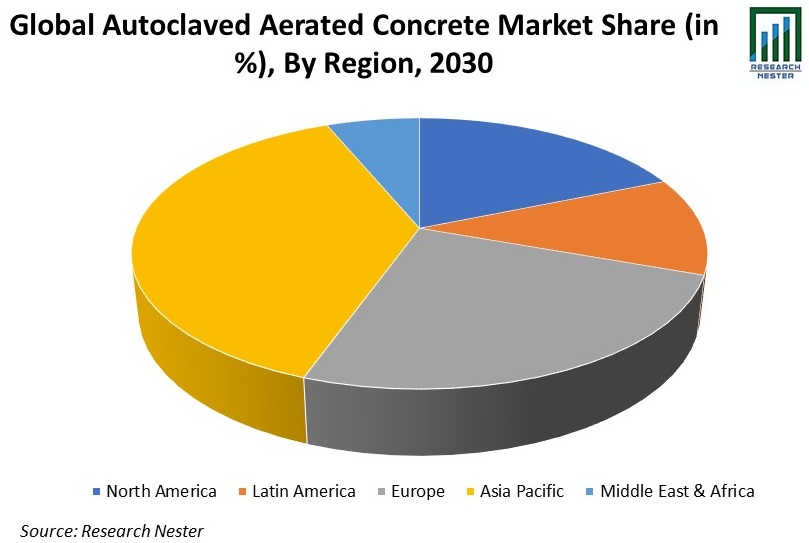 The global autoclaved aerated concrete market is further classified on the basis of region as follows:

What are the major factors driving the growth of the autoclaved aerated concrete market?

Rising demand for lightweight construction materials and rapid industrialization and urbanization around the world are the major growth drivers for the market.

What would be the CAGR of autoclaved aerated concrete market over the forecast period?

What are the challenges affecting the autoclaved aerated concrete market growth?

Higher production cost of AAC than ordinary concrete and less tensile strength of AAC are estimated to hamper the market growth.

Which region will provide more business opportunities for growth of autoclaved aerated concrete market in future?

North America is estimated to provide more business opportunities to the market growth owing to the increasing number of construction activities in the commercial and medical sectors in the region.

Who are the major players dominating the autoclaved aerated concrete market?

What are the segments in the autoclaved aerated concrete market?

Which segment captures the largest market size in the type segment in the autoclaved aerated concrete market?

The block segment is anticipated to hold the largest market size and is estimated to grow at a notable CAGR over the forecast period and display significant growth opportunities.